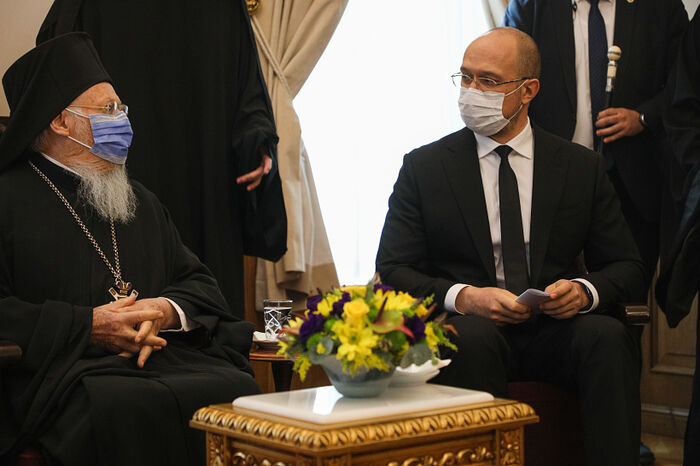 EDITOR’S NOTE (Nick Stamatakis): We have noted many times the adverse result of the Patriarch’s and Karloutsos policy in Ukraine.  Violence has erupted and Orthodox faithful were hurt…. Now we are hearing about a plan to transfer Church property belonging to UOC (of Metropolitan Onufriy – under the Moscow Patriarchate) to the Constantinople Patriarchate… Let’s hope this will not be true – but nothing will surprise us anymore…

President Vladimir Zelensky invited Patriarch Bartholomew to visit Ukraine during his trip to Istanbul in October. Following his meeting with Ukrainian Prime Minister Denys Shmyhal in late November, the Patriarch announced that he would indeed visit in August.

And, according to a new report from the Union of Orthodox Journalists (UOJ), much more was agreed upon between the PM and the Patriarch, with Shmyhal promising to keep up ex-President Petro Poroshenko’s end of the bargain by transferring properties from the canonical Ukrainian Orthodox Church under His Beatitude Metropolitan Onuphry of Kiev and All Ukraine to the Patriarchate of Constantinople.

During a meeting in Istanbul in November 2018, Poroshenko agreed to give a number of properties in exchange for autocephaly for the so-called “Orthodox Church of Ukraine.”

According to a source close to Shmyhal, the PM promised to begin implementing a plan of full state support for the OCU, which is recognized as schismatic by the Orthodox world, with few exceptions. The plan includes the “transfer” of churches and parishes of the canonical UOC to the schismatic OCU, as well as the full range of administrative support from the state.

Shmyhal promised to directly oversee such activities, the source told the UOJ.

Another key figure will be Andrei Yurash, the head of the newly-created Department for Ethnic Policy and Religion of the secretariat of the Ukrainian Cabinet of Ministers. Yurash is a Uniate and nationalistic enemy of all things “Russian” who played a key role in the very creation of the OCU. He plans to pursue legislative initiatives for the support of the OCU through his son, Deputy Sviatoslav Yurash.

The source also said that President Vladimir Zelensky will distance himself from these activities, fearing damage to his electoral initiatives. He won the presidency in a landslide over Poroshenko on a platform that included a policy of non-interference in Church matters, unlike his predecessor, who openly stoked inter-Church and ethnic enmity.

In its own commentary, the UOJ notes that this promise to Constantinople came only at the end of November, as it was becoming clear that Joe Biden would be accepted as the winner of U.S. presidential elections.

It is known that the OCU was created, at the least, with the support of, if not at the behest of, the U.S. State Department. Secretary Pompeo recently publicly acknowledged that he has been pressuring Churches to recognize the OCU. Biden himself is a supporter of Constantinople’s attack on the Ukrainian Church and has been known to pressure at least the Jerusalem Church to recognize the schismatics.

Biden styles himself as a great friend of the Greek diaspore in America and a defender of the Patriarchate of Constantinople as the supposed center of Orthodoxy. He was also the recipient of the Greek Archdiocese’s Athenagoras Human Rights Award in 2015, despite his un-Christian pro-abortion views.

Archbishop Elpidophoros of Constantinople’s Greek Orthodox Archdiocese of America offered a prayer at last year’s Democratic Convention, at which Biden was officially nominated as the Democratic candidate, while declining to offer a prayer at the Republic Convention. He will offer another prayer for Biden at tomorrow’s virtual inauguration and participate in an inter-faith ceremony.

Pat. Bartholomew gushed over the election of Biden as President, and Biden in turn told the Patriarch that the U.S. is in need of his guidance.

Biden is also a close friend of Fr. Alexander Karloutsos, the Archbishop’s representative to the office of the President and one of the most powerful men in GOARCH and the entire Patriarchate of Constantinople.

According to Fr. Karloutsos, Biden has told him many times: “I’ve traveled around the world and met major leaders, and there’s only two Christ-like figures I’ve met—one is Nelson Mandela and the other is Ecumenical Patriarch Bartholomew.”

“[Biden] has a great sense of faith,” the priest commented. Meanwhile, Planned Parenthood is eagerly expecting the ardently pro-abortion Biden to undo all of the Trump-era pro-life reforms.