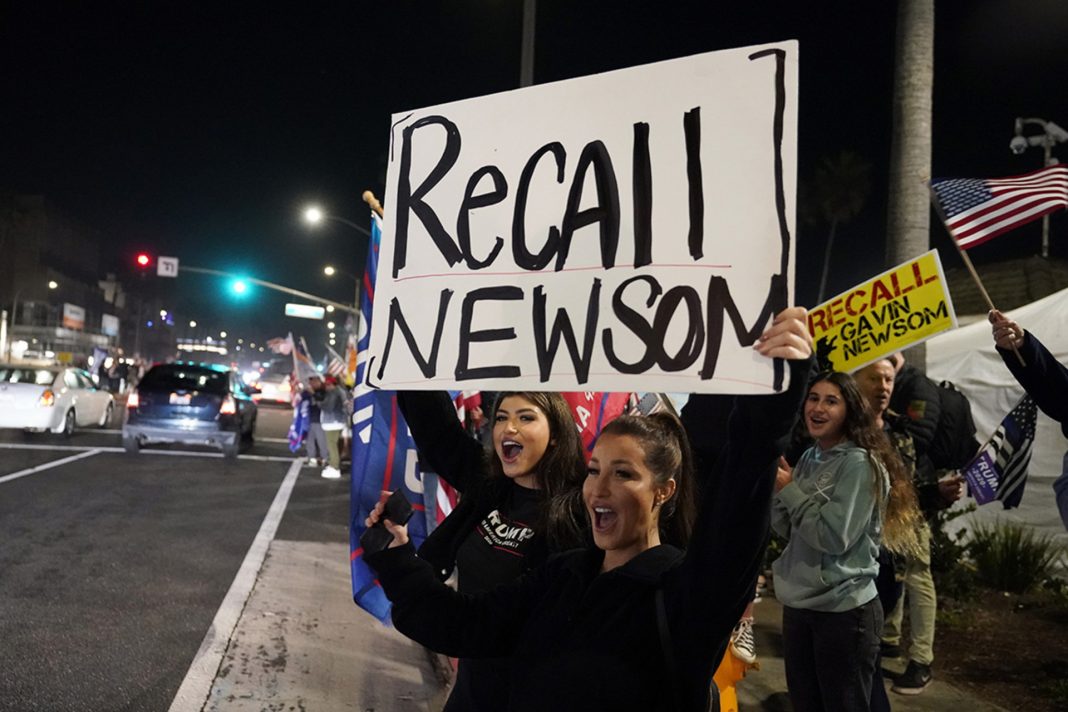 EDITOR’S NOTE (Nick Stamatakis): Future historians will certainly note that few presidents had as disastrous a beginning as Joe (Beijing) Biden.  From signing a record number of about 50 Executive Orders in just days (that are clearly unlawful and undermine our democracy – President Trump signed 50 in 4 years!), to destroying tens of thousands of jobs, to failing to open schools (his own director of CDC made a statement supporting immediate re-opening while he is still bowing to teacher’s unions!) to the mess he created with tens of thousands of illegals trying to cross the southern border), Biden has truly created a chaos at the very beginning of his supposedly “hopeful” presidency. And we haven’t even talked about the mess of his first foreign policy initiatives – which made America’s enemies very happy!

But of all the negative stories of the last two and a half weeks, the possible recall of California Governor Gavin Newsom is where the left will start paying a heavy price for its self-destructive policies.  Why? Because the “Socialist Republic of California” (where republicans/conservatives gained 4 House seats in November) is the personification of what is wrong with the Left and its policies.  In essence, it does not have much to do with the personality of Gavin Newsom – although he is as arrogant and narcissistic as other Democrat local leaders and particularly with Cuomo and De Blasio.  It mostly has to do with the leftist failed policies: these policies are the reason why millions of Americans are moving out of NY, California, Illinois, Minnesota, etc. towards states in the South where the country we all used to know still exists…

Let’s hope there will be enough sensible voters left in these states to kick out of power the destructive Left… As we have seen in our Church and community, arrogant and abusive leaders count on the fact τηατ reasonable people want first to live their lives and support their families and do not have much time to waste on removing them from power… 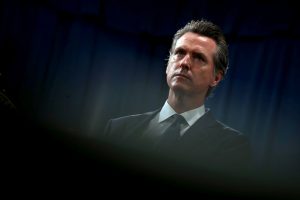 OAKLAND, Calif. — California Gov. Gavin Newsom doesn’t want to talk about the recall. But his allies can’t ignore it.

The campaign to oust Newsom went from unlikely to unavoidable this week as pervasive frustration with Newsom’s pandemic management cut sharply into his approval numbers. The longer businesses have been closed, hospitals full and school campuses shut, the more the movement has gained traction beyond conservative social media circles.

The nation’s biggest Democratic vulnerability after a score of blue victories has become an irresistible nightly feature on Fox News. Should the effort qualify, look for money to pour into the state and celebrities to add their names to the ballot, if only for the promotional benefits.

Newsom still deflects questions about the opposition effort by saying he is singularly focused on vaccinating Californians and reducing Covid-19 spread. He has adamantly denied that his abrupt decision to reverse stay-at-home orders last month was an attempt to quell voter frustration. And he seems determined to avoid legitimizing the effort by acknowledging it.

But California Democrats and their political backers are bracing for a campaign nevertheless as recall organizers turn in hundreds of thousands of signatures. State lawmakers are proclaiming their support for Newsom, seeking to tamp down any signs of disunity. Interest groups and donors who would be called upon to fund a recall defense are quietly ramping up, with one union launching the first public counteroffensive.

“Are we getting prepared to oppose it? Of course,” said Joe Cotchett, a longtime ally and donor to Newsom.

Nearly 18 years ago, California’s only gubernatorial recall drew 135 candidates, including several B-list celebrities and one A-lister: Arnold Schwarzenegger, who swept into office on a Republican promise to clean up state government. With just two statewide elections in the U.S. this year — governors races in Virginia and New Jersey — another California recall would likely become the biggest political event of 2021.

Getting the recall onto the ballot is the first lift; voters would then have to decide in a special election whether to recall Newsom and simultaneously which candidate they would prefer instead.

The recall could still fail to qualify. The deadline to certify is March 17, and the campaign is still operating on a shoestring budget by statewide campaign standards, relying on volunteers and some paid mail to collect the 1.5 million valid signatures they need. Proponents claim they have 1.3 million total signatures, still a ways off the nearly 2 million they will likely need to compensate for invalid signatories.

Still, the campaign had a surprisingly high rate of valid signatures in the last statewide report through early January, hovering around 85 percent. California county registrars have verified about 600,000 signatures so far.

“This public report does show a very high validity rate but their ultimate success relies on a few things: what happens to their response rate and what happens to their validity rates as they need to broaden their audiences out past just the hardest-core anti-Newsom audiences?” said Ned Wigglesworth, a consultant who is not affiliated with the campaign. “This huge flag is, as they work their way through the voter file, have they gotten this low-hanging fruit?”

Some supporters are not waiting around to see. The National Union of Healthcare Workers has launched an effort to dissuade people from signing onto the recall, including testimonials from hospital workers about how a Newsom recall would undercut them, after “it became clear it might qualify and people wanted to do something about it,” union president Sal Rosselli said.

“I do think at some point he needs to open a recall committee, start taking this s— seriously, and start going to war.”

“We can’t risk opening the door to some new administration that would be far less prepared to get people vaccinated and far less committed to protecting health care,” Rosselli said, adding that he had spoken with other labor leaders and hoped to win over “some friends that could make some significant contributions.”

Two of the state’s most respected polls this week showed that Newsom’s support has fallen after the state’s worst stretch of the pandemic, during which hospitals were filled beyond capacity and the state surpassed 40,000 Covid-19 deaths. The Berkeley Institute of Governmental Studies survey painted a worse picture for Newsom, showing his approval rating has plummeted from two-thirds in September to 46 percent now among all registered voters. Newsom may take comfort in the Public Policy Institute of California poll, which showed him at 52 percent support among likely voters; that’s a drop from the 59 percent he had in November, but still slightly higher than his pre-pandemic numbers.

Growing voter dissatisfaction may lead to the recall qualifying, but that doesn’t mean it will pass. Democrats have a 46 percent to 24 percent registration advantage over Republicans in California, and the IGS poll shows a 45 percent plurality said they would vote to retain Newsom, compared to 36 percent backing his removal.

A day after those polls underscored Newsom’s precarious footing, the governor appeared Wednesday at a press conference in which Bay Area allies lavished praise on his coronavirus management. “I talk to mayors all over the country, and I cannot tell you how lucky we are in California to have Gavin Newsom as governor,” Oakland Mayor Libby Schaaf said in introducing him.

As allies rally to Newsom’s defense, they will likely remind voters in this overwhelmingly Democratic state that the recall was launched by conservatives and Republicans who supported President Donald Trump — and that the top two GOP challengers backed the president who was deeply unpopular in the state. However, even in California, they can’t overreach in their defense of Newsom; state Democratic Party chair Rusty Hicks was roundly criticized last month when he declared the legal recall effort a “coup,” trying to draw a parallel between the signature drive and the U.S. Capitol siege.

Unlike a normal gubernatorial race, recalls do not limit campaign contributions. That means Newsom could draw on the full financial might of his supporters, including the state’s powerful organized labor movement. California Labor Federation spokesperson Steve Smith said labor leaders were discussing contingency plans to protect a “Democratic governor who’s done a lot of good things for workers.”

“It may not qualify, but we’re always going to be thinking ahead,” Smith said, and while he said groups had not specifically discussed financing, “obviously any campaign you’re talking about a resource allocation.”

But an effort to marshal that support could run into lingering tensions with labor officials who still seethe over what they see as Newsom’s uneven record, including vetoing a job security bill and lending a sympathetic ear to gig companies like Uber in a showdown over worker classification. A union official told the Los Angeles Times that Newsom was “putting us out to die” after shuffling essential food workers out of a top vaccine tier.

Teachers unions, an indispensable political force for California Democrats, are also pushing back on Newsom’s efforts to reopen schools. After the governor said union demands would effectively mean classrooms remain empty, the California Teachers Association retorted that their insistence on vaccines as a prerequisite was “neither a new nor unreasonable notion.”

Some Black women remain angry with Newsom for not appointing a Black woman to replace Vice President Kamala Harris, whose departure from the Senate means the chamber has no African American women. “Newsom and the Party better hope that Black women don’t decide to teach them both a lesson and either sign on to the recall or sit it out should it make it to the ballot,” Jasmyne Cannick, a Los Angeles-based political strategist and Democratic Party delegate, said in an email.

And the governor’s effort to build a united front of elected Democrats has run into the same coronavirus turbulence driving the recall effort. Late last year, Newsom called state legislators to ensure they had his back. Several elected officials joined a January press conference organized in part by Newsom’s team that denounced the recall as a project of the right-wing fringe. But numerous Democratic lawmakers publicly assailed Newsom’s reopening decision last week, saying they had been blindsided and questioning the rationale.

In the unfolding pandemic, economic crisis and reckoning on race, governors and mayors are shaping our shared future. Who are the power players, and how are they driving politics and influencing Washington?

Yet some of those lawmakers moved to swiftly temper their criticisms, signaling that they see party unity superseding their grievances with the governor. After tweeting out her frustration, Assemblymember Laura Friedman (D-Los Angeles) followed up by emphasizing she backs Newsom and opposes the recall, telling POLITICO in a text message that she was “dismayed that people seem to think that my comments were some kind of indictment of the governor or his work.”

In addition to those Republican candidates — a list that so far includes former San Diego Mayor Kevin Faulconer and Newsom’s 2018 opponent, businessperson John Cox — the free-for-all of a recall raises the threat of a viable Democrat jumping in to challenge Newsom if he is perceived as vulnerable. That is what happened in 2003, when Democratic Lt. Gov. Cruz Bustamante presented himself as an alternative to Gov. Gray Davis. The gambit by Bustamante failed, and his political career crumbled — a lesson not lost on the current crop of California Democrats.

“I can’t imagine an institutional Democrat” who is contemplating jumping in “doesn’t look at what happened in the last recall, specifically to the then-lieutenant governor — not just in his loss but the total destruction of a career,” said Assemblymember Lorena Gonzalez (D-San Diego), who worked for Bustamante, adding that “I don’t know a single Democratic legislator” who thinks “it’s a good idea to recall the governor.”

Newsom’s team will soon know if he will face the melee of a recall. But some political operatives believe the governor no longer has the luxury of waiting and seeing.

“I do think at some point he needs to open a recall committee,” said Democratic consultant Andrew Acosta, “start taking this s— seriously, and start going to war.”