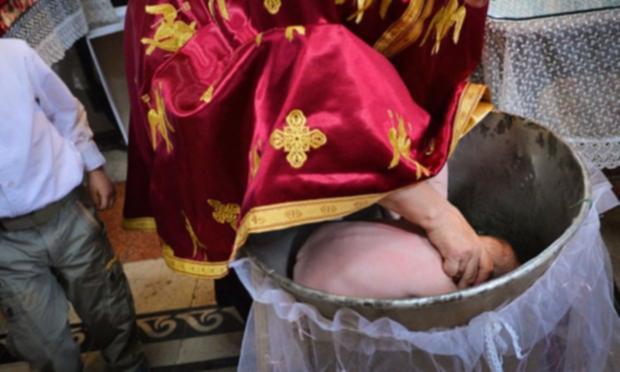 EDITOR’S NOTE (Nick Stamatakis): We all have seen a lot of talk about “modernizing” our Orthodox Church’s dogmas and rituals and practices. Much of this talk falls into the rapprochement with the Vatican and has been tarred by the globalist tendencies of both leaderships.  But maybe some modernizing with some common sense of certain rituals is necessary before we attempt modernizing the “Grand” concepts?  A ritual is a ritual – a set of symbolic acts and actions.  Couldn’t we modify the ritual somehow to avoid losing lives – at the same time as we give a fight against abortion?  A number of modifications can happen and the first step should be not allowing the traditional baptrism ritual before the 6th or 9th month…

Romania’s Orthodox Church is under pressure to change its baptism ritual after a baby boy died following a ceremony in which he was immersed three times in water.

More than 59,000 people have signed a petition urging the Romanian Orthodox Church to change the baptism ritual.

“Given the tragic situations in which infants died after immersion in the water in the baptismal font, the church must urgently regulate this practice!” the petition reads.

The six-week-old baby went into cardio-respiratory arrest on Sunday, after being immersed in a baptismal font three times during his baptism at a church in Suceava, north-eastern Romania, CNN affiliate Antena 3 reported.

“The boy was crying, but the priest immersed him three times in water and he inhaled water,” the child’s distraught father told local media.

The baby was resuscitated by paramedics in the church and was transported to the Intensive Care Unit at Suceava County Hospital, but died after a few hours, Antena 3 said.

Police have opened a culpable homicide investigation, according to Antena 3.

“It is, without a doubt, a tragic case, a case that will have to be investigated. Let’s not imagine that a child can be put in water without covering his nose, mouth and ears,” Vasile Bănescu, spokesman for the Romanian Patriarchate, told Antena 3 Monday.

“There is a technique that an experienced priest always uses. This is how a baptism is celebrated with the utmost care “, Bănescu added.

Vladimir Dumitru, who started the online petition, told CNN that he did not want to abolish the ritual of Orthodox baptism “but to change that sometimes brutal practice that involves the risk of drowning, especially in the case of children with health problems.”

“The petition is not directed against the institution of the Church or against the priests but has a constructive intention,” he told CNN.

“Through this petition we want the practice of baptism to be symbolic by sprinkling the baby on the top of the head and not its complete immersion three times, and this non-invasive practice to become mandatory in all Orthodox Churches in Romania and in the Diaspora,” he said in an email.

CNN has contacted the Romanian Orthodox Church and Suceava Police for comment.