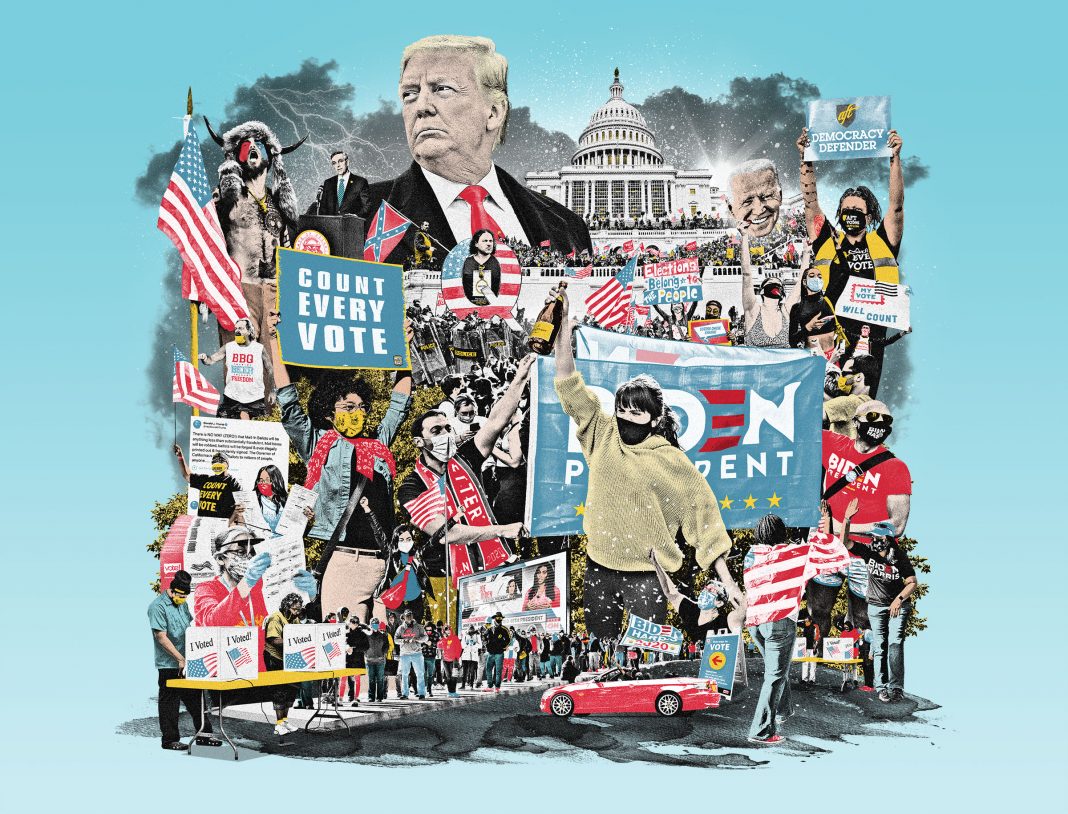 Corporate media has spent the last year arguing that Donald Trump’s claims about 2020 election integrity amount to “seditious” conspiracy theories. While maintaining that narrative despite the cognitive dissonance, Time magazine’s Feb. 15 cover story pulls back the curtain on a “conspiracy” among a “well-funded cabal of powerful people” in an “an extraordinary shadow effort” that successfully pushed Trump from office.

“In a way, Trump was right,” writes Time national political correspondent Molly Ball. “There was a conspiracy unfolding behind the scenes.” She later describes this “conspiracy” as something that “sounds like a paranoid fever dream — a well-funded cabal of powerful people, ranging across industries and ideologies, working together behind the scenes to influence perceptions, change rules and laws, steer media coverage and control the flow of information.”

Trump was treated like he had three heads for complaining the election was “rigged.” In the infamous speech he gave as violence broke out in the U.S. Capitol the day Congress certified the Electoral College votes, Trump said, “This year they rigged the election. They rigged it like they’ve never rigged an election before.” The left and some Republicans like Rep. Liz Cheney have insisted Trump’s strong claims like this incited an “insurrection.”

Yet Ball makes exactly these kinds of claims in the Time article, and goes on to substantiate them. It’s really hard to tell if the article is just a gloating bat flip, a horrifying attempt to radicalize more people among Democrats’ political opposition, or evidence the left believes Americans are so deadened under Democrat control they will not react to such public revelations of conspiracies to betray American self-governance.

The article is above all a striking work of doublespeak. It intones the “Trump is crazy” mantra at Trump’s charges of election-rigging while telling how powerful people conspired to rig the 2020 election. Ball documents a massive election-manipulation “conspiracy” among the nation’s rich and powerful. She shows an amazing level of contempt combined with ignorance about how someone who believes in self-government, as opposed to rule by oligarchs, might take this information.

The conspiracy’s “work touched every aspect of the election,” Ball writes. “They got states to change voting systems and laws and helped secure hundreds of millions in public and private funding. They fended off voter-suppression lawsuits, recruited armies of poll workers and got millions of people to vote by mail for the first time.”

This, she and the “dozens” of conspiracists she interviewed claim, is evidence of their efforts to “protect the election.” In fact, all of these tactics weaken election integrity.

For example, mail-in ballots are known as an unreliable voting method, even without its potential assistance to criminal fraud such as ballot-stuffing, because they create margins of error well within the margin of actual votes in a close election. That’s why labor unions, Jeff Bezos, and many foreign countries refuse to use them.

Therefore, in a mail-in election such as 2020, in which half of the total votes and most of the Biden votes were mail-in, one can control the outcome simply by controlling the poll-watchers and vote-counters. Even if they are honest, their unconscious bias or the simple mayhem of unreadable handwriting and signatures creates the conditions for untrustworthy results.

We have no way of knowing how many of the approximately 65 million 2020 election mail-in ballots were legal — meaning, how many fully complied with all applicable state laws to be validly completed by eligible voters. It could be all of them. It might not be. Nobody with power seems to care to find out. Joe Biden “won,” and the bad orange man is finally gone. That’s all that matters to them, and anyone who has any concerns or questions is simply a stupid bigot, end of story, move along, nothing to see here, shut up you white supremacist domestic terrorist or we’ll put you in jail without any bail — you’re so lucky we haven’t already.

One of the core problems with the 2020 election is that many states did not follow their voting laws, suspending them with the excuse of COVID (which the Centers for Disease Control said the day before the election, after most votes were already cast, was not necessary). States were pressured or forced to do so, not by what Ball hilariously calls Trump’s “henchmen,” but by lawyered-up leftist pressure groups that strategically undermined election protections with pre-emptive lawsuits while courts rolled over for them.

These leftist lawyers were unquestionably the aggressors in this situation, as Hans van Spakovsky and others have documented, filing as many as four times the number of lawsuits Trump or Republicans filed. Their efforts caused the very “election confusion” Ball claims her vaunted “conspiracy” was trying to avoid. What do you call people who do one thing while claiming to do the opposite? Idiots or liars. And I don’t think these people are idiots.

This “conspiracy” also rigged the election by pre-emptively controlling the information voters were able to receive about the candidates. They did this by colluding with big tech companies to hide information that made Joe Biden look bad. Post-election research found that just the conspiracy’s successful information control on Hunter Biden’s alleged corruption and its potential links to his father would have been enough to tip the election.

“They successfully pressured social media companies to take a harder line against disinformation and used data-driven strategies to fight viral smears … They executed national public-awareness campaigns that helped Americans understand how the vote count would unfold over days or weeks, preventing Trump’s conspiracy theories and false claims of victory from getting more traction. After Election Day, they monitored every pressure point to ensure that Trump could not overturn the result,” Ball writes.

The article shows how these activists pushed a narrative that election results would not be known on election night as part of their campaign to box out Trump. It then openly admits to a subsequent orchestrated attempt to anoint Biden the winner before all the votes had been tallied. This is how leftists made their “fever dream” a reality.

This coalition had private polling that mirrored the Trump campaign’s internal polling, which differed from the public polling released throughout 2020 that consistently appeared to show Trump far behind. A top “conspiracy” leader “was warning everyone he knew that polls were underestimating Trump’s support,” Ball writes.

To counteract this, he sent data to corporate media networks that got them to telegraph that the election results would take time to massage — oops, be counted. The delay made way for a late “surge” of “mail-in ballots” that were just what Biden needed in every place he needed them.

“Election night began with many Democrats despairing. Trump was running ahead of pre-election polling, winning Florida, Ohio and Texas easily and keeping Michigan, Wisconsin and Pennsylvania too close to call,” Ball noted. But the “conspiracy” leader watched the results unperturbed, she says: “he could tell that as long as all the votes were counted, Trump would lose.” Amazing projection skills, right? Especially considering his “cabal” in reality pushed to declare Biden the winner before “all the votes were counted.”

Another major part of this campaign to tamper with the democratic process was leftist’s influence over the media and tech companies that control what Americans learn about the world beyond their own ears and eyeballs. Ball introduces us to “a veteran progressive operative” who “piloted a nameless, secret project, which she has never before publicly discussed, that tracked…dangerous lies that might otherwise spread unnoticed. Researchers then provided information to campaigners or the media to track down the sources and expose them.”

It appears from Ball’s reporting that somebody got this research in front of Mark Zuckerberg, who in November 2019 “invited nine civil rights leaders to dinner at his home, where they warned him about the danger of the election-related falsehoods that were already spreading unchecked.” Zuckerberg and his wife’s foundation was subsequently a massive part of the election 2020 “conspiracy.”

Not only did Facebook make a massive in-kind contribution to Democrats with information manipulation on the platform, but also Zuckerberg’s foundation gave $350 million in 2020 to local governments to run elections, including “training” election workers. In Georgia, a highly contested state where subsequent Senate runoffs gave Democrats unified control of the federal government, Zuckerberg’s money was suspiciously aligned with hugely positive flips for Democrats.

The Time article bears close and repeated reading. One last area of observation here concerns its discussion of the alliance between big business and big labor.

The “conspiracy” leaders purposefully reached out to people dressed in Republican clothing, like Chambers of Commerce, to use them to help cloak Biden’s coronation in “bipartisan” colors. These double agents’ mission was to convince Republicans to quietly accept the election results, fear violence from leftists, and to provide internal pressure at key postelection choke points like certification votes in cities and states. It all worked.

It is certainly no coincidence that from 2020 to 2021, Republicans’ satisfaction with big business plummeted 26 points to 31 percent. The Wall Street Journal says that’s likely due to corporations increasingly choosing to “bypass[] the political process and interven[] directly to transform highly contested parts of American life.” No kidding.

Amid the big business-big labor discussion, Ball’s interviewees admit the leftist rioters who terrorized America throughout 2020 did so with the tacit permission of higher-ups, who can turn the riots on and off at will. That will be cold comfort to those who lost more than 30 family members in the riots and hundreds more in the subsequent murder sprees enabled the unrest pushing police to stand down from their jobs.

“Activists began preparing to reprise” the George Floyd riots as it looked like Trump was about to win, Ball writes. Their “Protect the Results” coalition “had a map listing 400 planned postelection demonstrations, to be activated via text message as soon as Nov. 4. To stop the coup they feared, the left was ready to flood the streets.”

But a curious thing happened on the way to this nationwide riot. The white-collar “conspiracy” leaders called off their thugs. Their nonviolent plan to “fortify the election” was working. Violence wasn’t needed at the moment. “[T]he word went out: stand down,” Ball writes. What a convenient little violent militia these people have, all at the summons of a text message!

‘Democracy’ Means No One Can Vote Against Us

The “conspiracy” of longtime Democrat activists who want Trump dead wasn’t about making sure he lost, Ball repeatedly insists while writing an entire article indicating the opposite. It was about “protecting democracy.” Left unstated is the context leftists have been stating for Trump’s entire tenure: they consider him “democracy’s” Public Enemy Number 1.

In this same article, Ball herself writes that leftist activists considered it their mission to “oppose Trump’s assault on democracy.” To them, forcing him from office is synonymous with “democracy.” As leftists activists made explicit in their plans to “shut down the country” if Trump clearly won, to them it was impossible for “democracy” to result in Trump’s election.

“Every attempt to interfere with the proper outcome of the election was defeated,” “conspiracy” member Ian Bassin told Ball (emphasis added). Heads Joe Biden wins, tails Donald Trump loses. In games, we call that “rigging.” In sports, we call it “cheating.”

So when they say they suspended election laws and threatened deadly violence to “protect democracy,” what all these people really mean is they worked to rig the election against Trump. They just think you are too stupid to put those two statements together. And they are apparently too narcissistic to hide their masterfully successful plotting.

As John Davidson says, the ruling class hates you, and they think you are stupid. In fact, they work to make you stupid and helpless, then laugh about it in your face afterward.

To Laugh Or To Cry?

Playing With Fire on Russia’s Borders