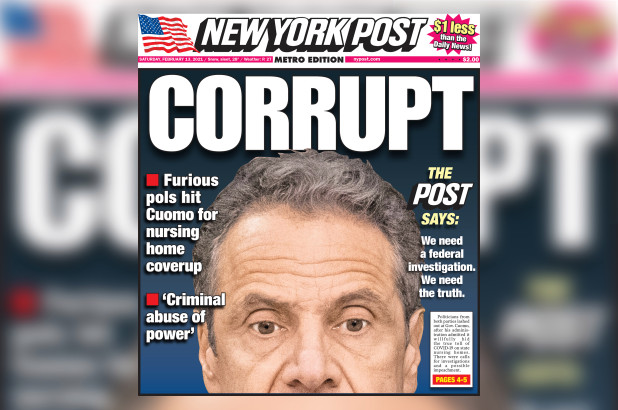 EDITOR’S NOTE (Nick Stamatakis): For a long time we have been noting the many aspects of corruption of NY Governor Andrew Cuomo. Joe Percoco, his close associate for decades, was sentenced to 6 years in prison (link here to the NY Times), for seeking his “ziti” (code for bribes) from developers… Yet, this fact was not enough to stop the NY Times from endorsing him, in another indication of the death of real journalism in our time.

In our community, we noted the unethical association of our Church’s so-called “leaders” with Andrew Cuomo.  Not simply on the basis of his obvious corruption but also because of his flagrant opposition to basic tenets of our faith, namely the endorsement of abortion even on the day of birth!  Was “baby-killer” Cuomo’s supposed support in building St.Nicholas in Ground Zero enough to throw out our faith? Had we handled St.Nicholas’ finances honestly and wisely would we need any support from anyone? What did Cuomo get in exchange for his “support”?

As many of you know (the rest of you please read the NY Post editorial board’s commentary below) Andrew Cuomo is now politically dead and no resuscitation (by financial aid) from the also corrupt Joe Biden will be able to revive him.  Even Democrat politicians are now turning against him – including the newly elected assemblyman Andrew Gounardes.  Top health officials in his administration have resigned and his own assistant stated publicly that they had hidden the records of nursing home deaths for fear of a federal investigation!! No matter how many billions Biden offers to save NY State from bankruptcy, Cuomo is a political corpse!… A corpse with an Emmy Award nonetheless (He was awarded an Emmy for his “leadership” performance in covid-19!)… And maybe close to jail time: Andrew Cuomo is one little step away from a federal criminal investigation into his role in the death of thousands of nursing home residents!

This brings us to our GOA “leaders” and especially Karloutsos (AB Elpidophoros can still claim he is not “immersed” in NY politics – but for how much longer?) In the last few years, we have corruption scandals erupting constantly around Karloutsos:  From the continuing criminal investigations within the GOA to his son Mike’s involvement in numerous scandals to his association with the Bidens and Ukraine (does anyone believe that Hunter Biden’s “laptop from hell” story will stop here?)  and to the supremely corrupt Andrew Cuomo ANYWHERE KARLOUTSOS TOUCHES THERE IS CORRUPTION.  “Show me your friends to tell you who you are”, we Greeks love to say… But for a “Karloutsos size” corruption, this proverbialism sounds more like a nuisance… 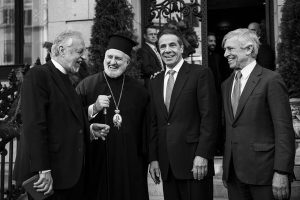 Unfortunately, Karloutsos has managed to guide the Patriarch into these corrupt circles of power (from Ukraine to the “green” movement, to completely identifying with the Democrats and the Globalists) at a time when the Church’s position should have been relative neutrality (especially because the faithful were moving in an opposite direction than the leadership).  There is global corruption in all these affiliations.  Less than a month into the Biden administration and the network of immorality and corruption is now clearer than ever. From Hunter Biden to the Lincoln Project’s pedophile CEO, to the collapse of the fake second impeachment, to the failure of the new administration to produce any progress on covid-19 to Gavin Newsom’s recall, to Andrew Cuomo’s “unraveling” – the GOA political affiliation with the establishment is proving to be a disastrous choice. A Church should always take a moral high ground. If they cannot do that, they at least have to stay away from morality landmines… GOA did just that: They stepped into every morality landmine imaginable!

What reason did they have to identify with all this corruption? What reason did the GOA leadership have to play such a one-sided hand in the political game? You can accuse former AB Demetrios all you want of managerial incompetence, but at least he kept a neutral position.  There was no reason for GOA to bet all their cards on the establishment’s side, in the overt and provocative way this GOA leadership did.  Arrogance is never a good guiding principle.  And “Hubris” is always followed by “Nemesis”…

The end result is that more faithful are abandoning the Church by the day… Where it will all end? In disaster I am afraid…

New York needs the truth about the Cuomo administration coverup of nursing-home deaths — and that means an independent federal investigation.

Gov. Andrew Cuomo’s top aide confessed privately this week that the administration suppressed the true COVID toll in the homes. She also offered an apology — not to the thousands of New York families who needlessly lost loved ones thanks to her boss’s mismanagement but to Democratic lawmakers put in a difficult “political position with the Republicans” by the coverup.

A federal investigation may be the only way to get the full truth of Team Cuomo’s order to nursing homes, populated by those most vulnerable to the virus, to take in COVID-positive patients. Not just the “what” of how many lives it cost, but the “why” behind this madness, and the months and months of coverup.

Melissa DeRosa, secretary to the governor, made the stunning statement on a video call with Democratic state lawmakers as she “explained” why the administration ignored since August their demands for nursing-home death data. It began when then-President Donald Trump “directs the Department of Justice to do an investigation into us,” she said. “And basically we froze.”

Suppressing evidence for fear of federal prosecution — what did the administration have to hide?

Another problem: The state started hiding the info months earlier, long before Trump tweeted a thing.

Later in the call, she said the Biden Justice Department isn’t as interested in Team Cuomo’s malfeasance. “All signs point to they are not looking at this, they’ve dropped it,” she said.

Not when she’s admitted a coverup, they can’t. The feds must reopen a probe and subpoena Cuomo, DeRosa, and Health Commissioner Howard Zucker.

Perhaps a special counsel is needed. Cuomo has long and strong ties to Biden, who reportedly considered him for attorney general. Cuomo was even at the White House Friday, managing to avoid reporters as he met with the president and other governors to discuss stimulus legislation.

What truth we now have only came despite Team Cuomo’s best efforts. It took a damning report from Attorney General Tish James and a court order in a months-old Freedom of Information suit to get the Health Department to cough up anything.

And the lies keep getting exposed. It turns out the number of recovering patients sent to nursing homes early in the pandemic — 9,056 — is 40 percent higher than what the DOH claimed in its whitewashing July report. The state just released the new number in response to an Associated Press Freedom of Information request made back in May.

New York needs to get to the bottom of Cuomo & Co.’s pack of lies. The public needs the full truth — and accountability.