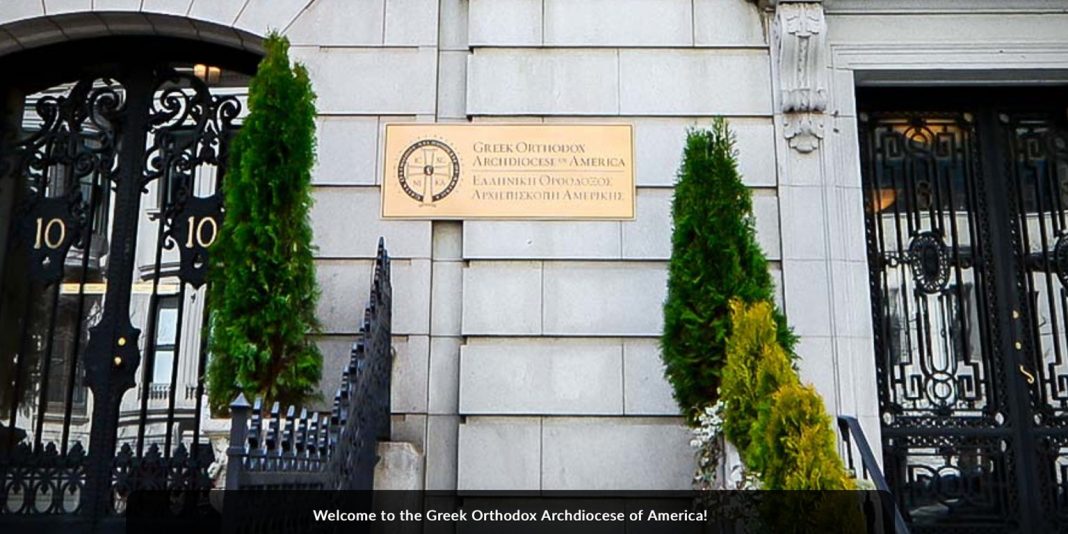 EDITOR’S NOTE (Nick Stamatakis):  We have noted in the past that establishing a male monastery in the Archdiocesan Headquarters is not the right way to run any Church – especially a Church whose main problem is lack of transparency and accountability.  Unfortunately, AB Elpidophoros, Karloutsos’ and the Patriarch’s goals were ANYTHING BUT transparency, and this is exactly why they established the “monastic commune” on East 79th Street. They did it with the specific purpose to not allow ANY information to leak outside the building.  Was that ever humanly possible? With so many “not so normal” characters around? We have referred in the past to the questionable personality of Fr. Vassilios Drossos and Bishop of Medeias Apostolos… With such choices by AB Elpidophoros, what kind of people would the newcomers from Turkey and Greece be?  You guessed it: they range from mediocre to questionable at best… (We have of course in GOA headquarters a few remarkable exceptions, among them Chancellor Fr. Andreas Vithoulkas and Secretary of the Eparchial Synod Fr. Nikiforos Fakinos… Both enjoy the highest reputation and both are married priests – not part of the commune…)

It was inevitable that the scandals, this time a physical altercation, would leak at some point – if we are to believe (and we have no reason not to) the report from our friends at  www.concernedorthodoxchristians.wordpress.com…

According to a higher ranking official under the Ecumenical Patriarchate, if one of the Patriarch’s Deacons accidentally leaves too many bread particles of our Lord’s Body on the Antimension, the Ecumenical Patriarch will summon the Deacon to his office to give him a warning that if it happens again, they will be SUSPENDED! Remember this point.

Have you dedicated any of your precious time to read the “balanced budget” approved by the Archdiocesan Council for 2021? Did you notice how the line item for “Communications” is expected to increase by $121,000 to have a total budget of $425,000 dollars for the new year. How wonderful it is for our Archdiocese to be committed to spending the money we donate to them on communicating with the faithful. But what timely and transparent communications have recently been released from Archbishop Elpidophoros and the Archdiocese of America?

The Holy Eparchial Synod recently held a meeting and released a press release of no value, providing no information about any new developments regarding the new Charter for the GOA. There was no announcement about the Archbishop’s short-term and long-term fund raising strategy for the clergy pension program, which His Eminence has specifically referred to as a “black hole.” We directly put this responsibility on the Archbishop because according to multiple sources, it has been confirmed that the Archbishop refuses to allow the independent Archdiocesan Clergy Benefits Committee to schedule a meeting unless they have the Archbishop’s expressed permission and blessings to do so. If the Archbishop is going to hijack an independent committee, His Eminence better be prepared to offer timely solutions to the severe problems at hand.

With all the increases the Archdiocese is willing to spend on communications, it is important to ask when any communication of real value is going to come from New York. Take for example how the Orthodox Observer no longer offers any timely updates regarding clergy assignments, offikia, transfers, priests on loan, and suspensions. Under the leadership of Archbishop Elpidophoros, we are moving away from what little transparency was even offered over the last two decades.

And it shows! You may be asking how? Did you hear about the two celibate clergymen who got into an intense physical altercation in the Chancellor’s Office? Of course not! The Greek media including The National Herald seems to no longer be committed to offering valuable information that may provide a clear indication of how truly incompetent Archbishop Elpidophoros really is as the Archbishop of America. In fact, we have learned from many reliable clergymen that the Archbishop is allegedly threatening a harsher punishment for clergymen and Archdiocesan employees who leak information about this incident compared to the two clergymen who were in fact fighting like little girls at our Sacred Archdiocesan Headquarters.

Tension has been brewing behind the scenes for some time at the Archdiocese between two of the celibates that the Archbishop brought over from Greece/Turkey to be ordained and assigned into key positions in our Archdiocese. Of course, nothing is known about whether these two clergymen have even received a proper education from an accredited theological institution of higher learning. These were two celibates that have been apart of the Archbishop’s Celibate Brotherhood since its inception in 2019.

According to multiple sources, the Very Rev. Archimandrite Vasileios Drossos who is officially listed as the “Senior Advisor to the Archbishop,” and the Rev. Hieromonk Spyridon Chatzis who is officially listed as an “Administrative Assistant to the Office of the Chancellor,” allegedly got into a physical altercation in front of the Chancellor. Father Vasileios went to the Chancellor’s office to speak with Father Andreas Vithoulkas confidentially and told Father Spyridon to get out of the office. Father Spyridon initially refused which triggered a reaction by Father Vasileios. According to one clergyman, who offered to speak on the condition on anonymity because of the very real threat of retaliation by the Archbishop, said that these two celibate clergymen may have been fighting over a secret love interest.

“What can be so important at the Archdiocese that would spark the passion for two celibate clergymen to get into a physical fight like little children,” said the clergyman.

He continued saying, “It is common knowledge that when two men fight it usually involves a secret love interest. Our Archbishop has a responsibility to be transparent about the conduct of our Archdiocesan employees considering that their salaries come from funds provided to the Archdiocese from the parishes and their faithful. To do otherwise invites speculation to run rampant in our Greek community. (Helleniscope’s note: Very graphic rumor here – which we cannot publish…)

It is certainly comprehensible for one to infer that the Archbishop must be extremely embarrassed by this situation. His Eminence brought these two people to America; two people who had no previous service to our Archdiocese in America. The Archbishop ordained and assigned them into top administrative positions over the servants of our Lord who have faithfully served in our Archdiocese for years, only to have them both show that there true character is unbecoming of their priestly office.

Remember at the beginning of this publication how we indicated what happens at the Mother Church of Constantinople about leaving too many bread particles on the Antimension? We must ask, what is the penalty for two clergymen fighting? We know that allegations of sexual misconduct against a celibate clergymen results in them being elevated as a Metropolitan of the Ecumenical Throne.

The Archbishop should be willing to give his paternal blessings for the Orthodox Observer to return to its previous practice of listing clergy updates in a transparent manner. After all, if we are going to spend at least a half a million dollars each year on communications, can the GOA at the bare minimum be committed to providing something of value and transparent in future publications?

Instead of distracting the faithful with useless, non-Scripture based ministries (i.e. the 200th Anniversary of Greek Independence), is it possible, just for once, for the GOA to actually inform the faithful about what is happening with the more important manners of the Archdiocese? We know you do not want to because it is quite obvious that the current Archdiocesan leadership doesn’t have an ideal solution to the problems we face, but what alternative is there if our goal is to expand the Church ministries and community? If we want a future generation actively involved in the Church, it is imperative that we have competent Church leaders. So far, the faithful is still waiting for them to emerge into positions of authority.