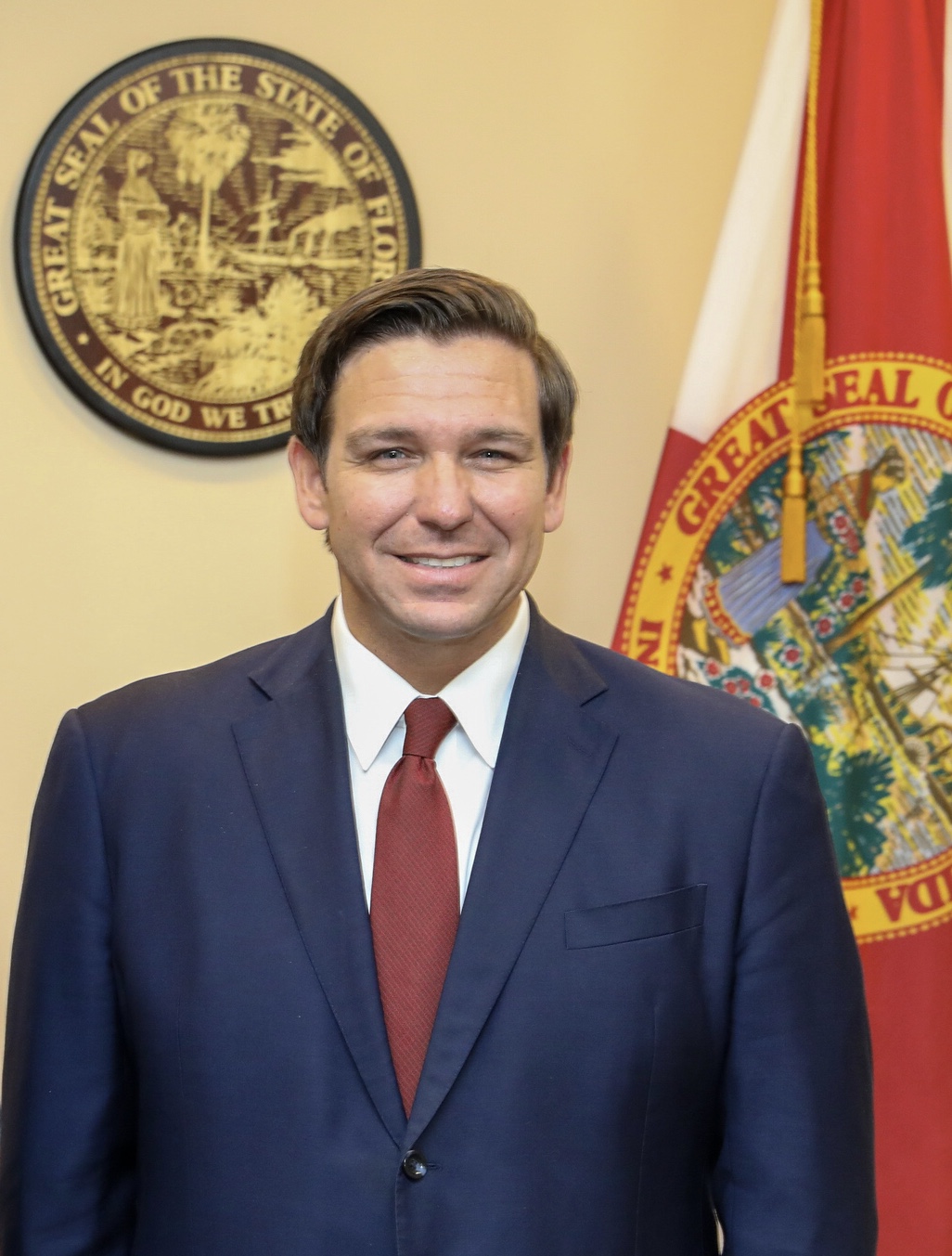 There’s a reason why the Biden regime is trying to attack Florida Gov. Ron DeSantis and create an illusion of a disproportionate viral crisis in the state. With no declared emergency restrictions in place at the state level since last September, the fact that Florida is doing better than the national average completely exposes the lie of lockdown and masks having any effect whatsoever on the fixed natural progression of the virus.

Dr. Fauci is suggesting a novel scientific principle – that schools can’t reopen until Congress passes yet another “stimulus” bill. Yet in Florida, schools have been open all year, and the state’s excess deaths for 2020 rank the 16th lowest in the nation, according to a new analysis. What’s more, the Sunshine State, which is regarded as God’s waiting room for seniors, experienced the 11th lowest per capita rate of COVID deaths for seniors in 2020.

A new analysis conducted by RationalGround.com and exclusively obtained by TheBlaze collated CDC excess death data for 49 states (excluding North Carolina, which has incomplete data) and ranked the states from smallest to largest increase in excess deaths from 2019 to 2020. As we have seen in study after study, there is absolutely zero correlation between non-pharmaceutical interventions, such as business and school closures or mask mandates, and a lower rate of excess deaths.

According to the CDC’s excess death table, there was a 16.9% national average increase in all-cause mortality in 2020 over 2019. Given the loose way we count COVID deaths, it will take quite some time to sort out how many of those deaths are due to COVID and how many are due to the panic, anxiety, lockdowns, and missed care, but what is clear is that there is no correlation between the political measures taken by a state and fewer all-cause deaths.

Florida, which is the third largest state, has the 16th lowest increase in all-cause deaths, and all of the states that had fewer excess deaths than Florida are much smaller and are mostly states with lower population density. California, on the other hand, ranked No. 40. 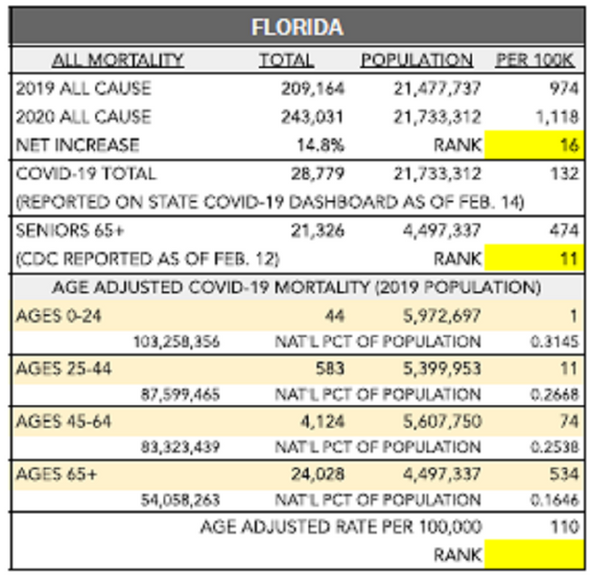 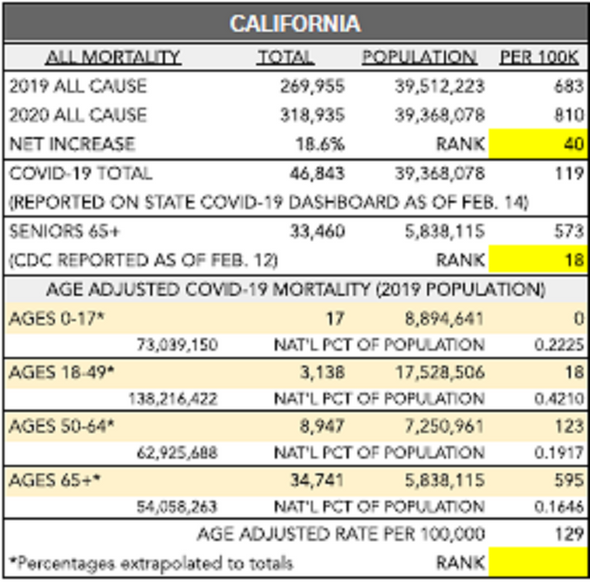 What is most striking is that if you rank the number of COVID-19 deaths among seniors by state per 100,000, Florida ranks the 11th lowest in the nation! Florida suffered 474 COVID deaths per 100,000, while California suffered 573 per 100,000. Florida beat even some smaller lockdown states as well: 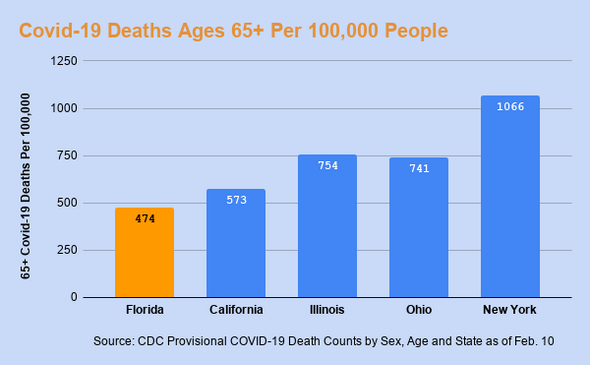 Remember, California did everything “right.” The state implemented the most severe and earliest lockdowns and mask mandates. Just 5% of school children have returned to school. In contrast, Florida has had no statewide restrictions for months, and nearly all children were back in school in September. What’s more, Florida has become the top destination both for people permanently moving and also vacationing during the great winter spread of the virus. According to those who believe human input is what determines the trajectory of the virus, Florida, especially with its senior population, should have been toward the bottom, with much higher all-cause mortality.

Yes, some of the lowest all-cause mortality states are blue states, such as Hawaii and Vermont. But so are red states, such as West Virginia and Alaska. Generally, the states with lower population density and those most isolated had fewer deaths. Hawaii is the most isolated state of all. Florida, being the third most populous state, beat numbers 4-12 with a lower percentage increase in excess deaths among seniors. Also, with the highest unemployment rate in the nation, Hawaii will be dealing with excess deaths of misery for years to come.

The Rational Ground analysis used CDC excess death data (predicted/weighted for 2019 and provisional for 2020) to rank the states by all-cause mortality increases and used the CDC’s provisional COVID-19 deaths by sex, age, and state to rank the per-capita COVID-19 deaths by state for the senior population. If anything, as California’s numbers continue to be updated, they will get worse because most of their deaths were at the end of the year.

When the lockdowns and school closures began last March, the totalitarians predicted the nightmare scenario of children killing their grandparents, despite the existing evidence that children did not contribute much to community spread. Well, this chart created by Rational Ground contributor Kyle Lamb, comparing Florida to other states in terms of school reopenings, is worth 1,000 words. 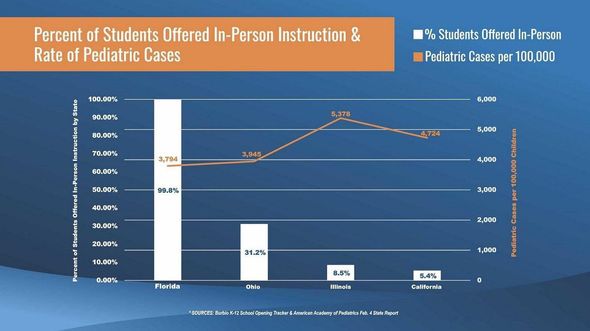 This chart uses Burbio’s school opening tracker, which tabulates the percentage of public school students in all the school districts in each state that have in-person instruction available to them. As you can see, nearly 100% of Florida students have access to in-person instruction, per the governor’s order early last year. Yet the state has fewer pediatric cases per 100,000 total since the beginning of the pandemic than other states with very few children in school, including California, where just 5.4% of public-school students have access to in-person classes.

Let’s not forget that states like California and Illinois will be suffering from excess deaths for years to come as a result of these illogical and inhumane decisions. The University of California published a study in JAMA estimating a cumulative loss of 5.53 million life years from this generation of children due to lost educational attainment.

Thus, there is literally zero benefit to shutting schools, shutting businesses, or wearing masks. It is all pain and zero gain. California has nothing to show for its year-long lockdown but more deaths per capita and 30% higher unemployment than Florida, as well as all the long-term excess deaths induced by hopelessness that we will tragically be counting for years to come. As for Florida, it doesn’t need a stimulus to reopen schools; opening schools and society is the stimulus.

Editor’s note: The original title of this piece and one line stated Florida ranks 11th in excess deaths among seniors. They have been corrected to 11th in COVID deaths per capita among seniors.