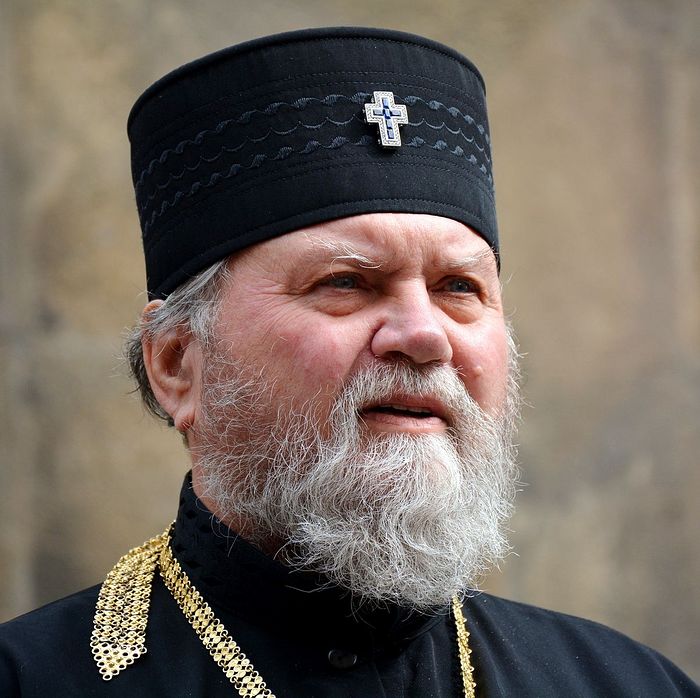 EDITORS NOTE: A new wholesale industry of “Autocephaly” is being operated by the Constantinople Patriarchate… In a February 1st letter to the Metropolitan Michael of Prague, Pat. Bartholomew expresses his displeasure regarding the 1951 Autocephaly of the Check-Slovak Church which was granted by the Moscow Patriarchate… But he conveniently forgets his own letter of August 31 1992 where he recognized Moscow’s jurisdiction over Ukraine in the issue of defrocking Mikhail Denisenko where Pat. Bartholomew wrote: “Our Holy Great Church of Christ, recognizing the plenitude of competence, exceptional in this matter, of your Most Holy Russian Church, takes a synodal decision on the afore-said, not wishing to cause any troubles for your sister Church.”

What changed? After 1990 and the end of the “Cold War” – and especially two decades later when the “Clash of Civilizations” became official State Dept. doctrine – the Patriarchate and specifically Pat. Bartholomew himself guided (rather “misguided”) by Karloutsos has been rendered a pawn of deep state actors who seek to take away any religious influence the Russian Patriarchate may have over Eastern Europe and the Balkans. In other words, the Patriarchate sacrificed even Orthodox Unity and caused a “Schism” in order to advance political goals unrelated to religion…

We had many Patriarchs since the times of President Truman and they all recognized their role in favor of American foreign policy.  But none reached that low level of abandoning age-old principles of Orthodoxy and turning the Patriarchate into a geopolitical pawn…

His Eminence Archbishop Michael of the Prague of the Church of the Czech Lands and Slovakia again finds himself in the bad graces of Patriarch Bartholomew of Constantinople.

On February 1, the Patriarch sent the Archbishop a letter expressing his extreme displeasure at the fact that the latter had referred in his 2021 New Year’s epistle to the 70th anniversary of the granting of autocephaly to the Czech-Slovak Church by the Russian Orthodox Church in 1951.

Czechoslovakia was the canonical territory of the Russian Orthodox Church when its Church received autocephaly in 1951, though this act was never recognized by Constantinople, which granted it a second, more restrictive tomos of autocephaly in 1998. The celebration of the Russian tomos has angered Pat. Bartholomew before, even to the point of threatening to revoke the Czech-Slovak Church’s autocephaly.

Abp. Michael also received a letter of similar tone last year from Metropolitan Apostolos of Derki, written on behalf of Pat. Bartholomew, accusing him of “non-canonical activities” and “irreparable harm to the souls” of the Czech-Slovak faithful, threatening him with “strict intervention” if he did not cease protesting Constantinople’s establishment of a monastery-association in the Czech Republic.

While Constantinople claims to have done so with the blessing of the local Holy Synod, in fact, the hierarchs were unaware of its intentions beforehand and the matter was never discussed by the Holy Synod, as His Eminence Archbishop Juraj of Michalovce and Košice explained in comments to OrthoChristian.

Abp. Michael also defied the Patriarchate of Constantinople in 2019 when he issued a decree categorically forbidding his clergy from concelebrating with “clergy” of the schismatic “Orthodox Church of Ukraine.”

Independence from the Russian Church, dependence upon Constantinople

Pat. Bartholomew’s new letter is published in Russian translation on the site Credo Press. The authenticity of the letter was confirmed to OrthoChristian by a member of the Holy Synod of the Church of the Czech Lands and Slovakia.

Having greeted the Archbishop, the Patriarch proceeds to condescendingly refer to the “imaginary” autocephaly from the Russian Church that the Czech-Slovak Church enjoyed for nearly 50 years before the new tomos of autocephaly from Constantinople was imposed upon it in 1998.

The tomos from the Russian Church granted complete and total independence in all respects, and when after the fall of the communist regime in 1989 the Czechoslovakian Church began to look to mend relations with Constantinople, it had hoped for a document of fraternal love that would essentially ratify the situation that had already existed for decades. However, the tomos granted by Constantinople, in fact, severely curtailed the freedom of the Church, making it a “slave” of Constantinople, in the words of one hierarch of the Czech-Slovak Church to OrthoChristian.

As the Doctor of Theology and member of the Prague Diocesan Council Jakub Jiří Jukl writes: “In principle, the tomos gives the Orthodox Church of the Czech Lands and Slovakia independence, but at the same time, in court cases over bishops and in Church-wide matters it puts it in complete dependence upon the Ecumenical Patriarchate.”

See his article, “The Ecumenical Patriarchate’s Role in the Crisis Period of the Orthodox Church in the Czech Lands and Slovakia” for more details about the tomos granted by Constantinople.

Pat. Bartholomew presents the events in 1998 as the Church’s repudiation of its 1951 tomos, when, in fact, it was simply looking to mend relations, not to have a new order imposed upon it.

Thus, Constantinople began to actively interfere in the elections for a new Archbishop of Prague and new primate of the Czech-Slovak Church following the retirement of His Beatitude Metropolitan Christopher in 2013. Constantinople refused to recognize the canonically-elected Metropolitan Rastislav, who was the Archbishop of Prešov, until it was forced to reconcile with the Church in 2016 so that it could attend that summer’s Council of Crete.

Pat. Bartholomew then makes a factually incorrect argument, telling Abp. Michael that the Czech-Slovak Church had had no interest in celebrating the 50th anniversary of the Russian tomos in 2001, but for some reason it chose to defiantly celebrate the 60th anniversary in 2011.

Pat. Bartholomew also expressed his anger then, following the 60th anniversary celebrations. In a letter to then-primate Met. Christopher, he threatened to revoke the Czech-Slovak Church’s autocephaly if it ever again celebrated the Russian tomos of autocephaly.

The Patriarch wrote at that time:

Therefore, by the unanimous decision of our Holy Synod, we once again protest against this anti-canonical action of your Holy Church and strongly inform you that in the event of a repeat of similar events to celebrate the autocephaly imposed by the Moscow Patriarchate on the Church of the Czech Lands and Slovakia, which was considered not to have existed and was recognized as invalid from the very beginning, the Ecumenical Patriarchate will regretfully have to abolish the canonical autocephaly granted to your Church 14 years ago, return to the Church of the Czech Lands and Slovakia the status of an autonomous Church that existed previous to this canonical act, remove it from the sacred diptychs of the Autocephalous Orthodox Churches, where it occupies the 14th place, and notify all the sister Orthodox Churches of this act.

While Pat. Bartholomew does not write such a direct threat in his new letter, he does emphasize that if Constantinople expresses its displeasure, “then anyone can consider your Church unsettled and anti-canonical.”

The Patriarch then informs Abp. Michael that the 1951 tomos of autocephaly is a negative and insignificant event in the life of the Czech-Slovak Church, and warns him to stop provoking Constantinople:

Learn, finally, the history and canonical rights of our Holy Orthodox Church and don’t provoke us!

The primate of Constantinople closes by wishing the Archbishop “grace and enlightenment.”

Your Eminence Metropolitan Michael of Prague, beloved brother in the Holy Spirit and concelebrant of our mediocrity, may the grace and peace of God be with your holiness.

It is with regret that we learned that in your epistle for the new year, Your Eminence referred to the 70th anniversary of the granting of imaginary autocephaly status to your Local Church by the Holy Russian Church (1951). We say “imaginary” because this Sister Church never had and does not have the canonical right, as it itself received its own autocephaly in the 16th century from the Ecumenical Patriarchate, as the sole granter of autocephaly, as did all the other later new autocephalous Churches.

If the autocephaly of your Church was canonical and valid, why did your Archbishop Dorotheus feel the need at the end of the last century to request canonical autocephaly from our Mother Constantinople Church for the hierarchy, clergy, and people of the Church of the Czech Republic and Slovakia?

And the Mother Church lovingly responded then, and so you entered into communion with the canonical autocephalous Orthodox Churches, recognized by all, and you received the honor of participating in the Holy and Great Council of the Orthodox Church in Crete. Your Church, contrary to our agreements, continues to this day to, under various pretexts, erect impediments and not respond to the natural demand of the Ecumenical Patriarchate to bring the charter of the Orthodox Church of the Czech Republic and Slovakia into accordance with the conditions of the tomos of canonical autocephaly, which cannot remain without unpleasant consequences.

We exchanged letters then, sent in copies to Your Eminence, but if we express the dissatisfaction and reproaches of the Ecumenical Patriarchate in connection with the inexplicable and unacceptable intention to celebrate the 70th anniversary of the imaginary autocephaly, then anyone can consider your Church unsettled and anti-canonical, being subordinate to the Holy Church of Russia. Your desire to regularly celebrate this negative, obviously non-canonical event, which is insignificant for your Holy Church of the Czech Republic and Slovakia, raises doubts about your honesty and sincerity, at least in relation to the Mother Church of Constantinople.

Learn, finally, the history and canonical rights of our Holy Orthodox Church and don’t provoke us!

May the grace and enlightenment of our Lord, Who was manifest to the world for its salvation, be with Your Holiness.

+ With love in Christ, your brother
Bartholomew of Constantinople