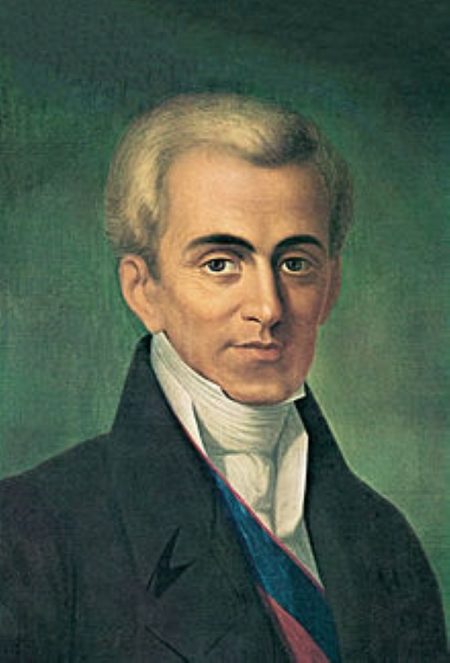 EDITOR’S NOTE (Nick Stamatakis): Many recognize Ioannis Capodistrias as the enlightened first governor of Greece and most know that he was the Foreign Minister of Russia at a very critical time, a time of great change in Europe.  How many realize that Henry Kissinger’s doctoral dissertation at Harvard had as the main focus the struggle between two opposing views for Europe, Matternich’s (the Austrian Foreign Minister) and Capodistrias’ (The Foreign Minister of Russia)?  This is how critical these times were…  Among the most important issues were the preservation of the unity of France, the establishment of a new constitution for Switzerland, and finally the Greek Revolution, which was the beginning of the end of the Ottoman Empire. How many among us realize that Ioannis Capodistrias was the author of the first Swiss Constitution, the basic form of which is still in effect today?  Yes, my friends, Capodistrias helped establish one of the most democratic constitutions on earth and probably the only example of “direct democracy”, limiting in many ways the damaging interference of “representatives” (the bad effects of which we all live today)… “Naturally”, he is honored and celebrated in Switzerland more than he is in Greece…

Capodistrias had to balance his position as the Foreign Minister of Russia with his love for Greece and his determination to fight for Greek Independence.  He sacrificed everything to the cause of Greek independence (even a very serious romantic love affair – but this is a story for another day)…

Capodistrias as the Russian Foreign Minister 1809-1822

In 1809 Kapodistrias entered the service of Alexander I of Russia.[34] His first important mission, in November 1813, was as unofficial Russian ambassador to Switzerland, with the task of helping disentangle the country from the French dominance imposed by Napoleon. He secured Swiss unity, independence and neutrality, which were formally guaranteed by the Great Powers, and actively facilitated the initiation of a new federal constitution for the 19 cantons that were the component states of Switzerland, with personal drafts.[35]

Collaborating with Anthimos Gazis, in 1814 he founded in Vienna the “Philomuse Society“, an educational organization promoting philhellenism, such as studies for the Greeks in Europe.

In the ensuing Congress of Vienna, 1815, as the Russian minister, he counterbalanced the paramount influence of the Austrian minister, Prince Metternich, and insisted on French state unity under a Bourbon monarch. He also obtained new international guarantees for the constitution and neutrality of Switzerland through an agreement among the Powers. After these brilliant diplomatic successes, Alexander I appointed Kapodistrias joint Foreign Minister of Russia (with Karl Robert Nesselrode).

In the course of his assignment as Foreign Minister of Russia, Kapodistrias’s ideas came to represent a progressive alternative to Metternich‘s aims of Austrian domination of European affairs.[34] Kapodistrias’s liberal ideas of a new European order so threatened Metternich that he wrote in 1819:[34]

Kapodistrias is not a bad man, but honestly speaking he is a complete and thorough fool, a perfect miracle of wrong-headedness…He lives in a world to which our minds are often transported by a bad nightmare.

More than anyone else he possesses the art of devaluing opinions that are not his own; the most honourable life, the purest intentions are not sheltered from his insinuations. It is thus with profound ingenuity that he knew how to neutralize the influence of Count Capodistrias, the only one who could counterbalance his own

Metternich, by default, succeeded in the short term, since Kapodistrias eventually left the Russian court on his own, but with time, Kapodistrias’s ideas and policies for a new European order prevailed.[34] He was always keenly interested in the cause of his native country and in particular the state of affairs in the Seven Islands, which in a few decades’ time had passed from French revolutionary influence to Russian protection and then to British rule. He always tried to attract his Emperor’s attention to matters Greek. In January 1817, an emissary from the Filiki Eteria, Nikolaos Galátis, arrived in St. Petersburg to offer Kapodistrias leadership of the movement for Greek independence.[36] Kapodhistrias rejected the offer, telling Galátis:

You must be out of your senses, Sir, to dream of such a project. No one could dare communicate such a thing to me in this house, where I have the honour to serve a great and powerful sovereign, except a young man like you, straight from the rocks of Ithaka, and carried away by some sort of blind passion. I can no longer continue this discussion of the objects of your mission, and I assure you that I shall never take note of your papers. The only advice I can give to you to is to tell nobody about them, to return immediately where you have come from, and to tell those who sent you that unless they want to destroy themselves and their innocent and unhappy nation with them, they must abandon their revolutionary course and continue to live as before under their present government until Providence decrees otherwise.[37] 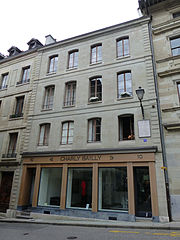 Residence of Kapodistrias in Geneva

Statue of Kapodistrias in Corfu with the Ionian Academy in the background.

In December 1819, another emissary from the Filiki Eteria, Kamarinós, arrived in St. Petersburg, this time representing Petrobey Mavromichalis with a request that Russia support an uprising against the Ottomans.[38] Kapodistrias wrote a long and careful letter, which while expressing support for Greek independence in theory, explained that at present it was not possible for Russia to support such an uprising and advised Mavromichalis to call off the revolution before it started.[39] Still undaunted, one of the leaders of the Filiki Eteria, Emmanuel Xánthos arrived in St. Petersburg to again appeal to Kapodistrias to have Russia support the planned revolution and was again informed that the Russian Foreign Minister “…could not become involved for the above reasons and that if the arkhigoi knew of other means to carry out their objective, let them use them”.[40] When Prince Alexander Ypsilantis asked Kapodistrias to support the planned revolution, Kapodistrias advised against going ahead, saying: “Those drawing up such plans are most guilty and it is they who are driving Greece to calamity. They are wretched hucksters destroyed by their own evil conduct and now taking money from simple souls in the name of the fatherland they do not possess. They want you in their conspiracy to inspire trust in their operations. I repeat: be on your guard against these men”.[41] Kapodistrias visited his Ionian homeland, by then under British rule, in 1818, and in 1819 he went to London to discuss the islanders’ grievances with the British government, but the British gave him the cold shoulder, partly because of the fact that, uncharacteristically, he refused to show them the memorandum he wrote to the czar about the subject.[42]

In 1821, when Kapodistrias learned that Prince Alexander Ypsilantis had invaded the Ottoman protectorate of Moldavia (modern north-eastern Romania) with the aim of provoking a general uprising in the Balkans against the Ottoman Empire, Kapodistrias was described as being “like a man struck by a thunderbolt”.[36] Czar Alexander, committed to upholding the established order in Europe, had no interest in supporting a revolt against the Ottoman Empire, and it thus fell to Kapodistrias to draft a declaration in Alexander’s name denouncing Ypsilantis for abandoning “the precepts of religion and morality”, condemning him for his “obscure devices and shady plots”, ordering him to leave Moldavia at once and announcing that Russia would offer him no support.[36] As a fellow Greek, Kapodistrias found this document difficult to draft, but his sense of loyalty to Alexander outweighed his sympathy for Ypsilantis.[36] On Easter Sunday, 22 April 1821, the Sublime Porte had the Patriarch Grigorios V publicly hanged in Constantinople at the gate of his residence in Phanar.[43] This, together with other news that the Ottomans were killing Orthodox priests, led Alexander to have Kapodistrias draft an ultimatum accusing the Ottomans of having trampled on the rights of their Orthodox subjects, of breaking treaties, insulting the Orthodox churches everywhere by hanging the Patriarch and of threatening “to disturb the peace that Europe has bought at so great a sacrifice”.[44] Kapodistrias ended his ultimatum:

“The Ottoman government has placed itself in a state of open hostility against the Christian world; that it has legitimized the defense of the Greeks, who would thenceforth be fighting to save themselves from inevitable destruction; and that in view of the nature of that struggle, Russia would find herself strictly obliged to offer them help because they were persecuted; protection, because they would be in need of it; assistance, jointly with the whole of Christendom; because she could not surrender her brothers in religion to the mercy of a blind fanaticism”.[45]

As the Sublime Porte declined to answer the Russian ultimatum within the seven day period allowed after it was presented by the ambassador Baron Georgii Stroganov on 18 July 1821, Russia broke off diplomatic relations with the Ottoman Empire.[44] Kapodistrias became increasingly active in support of Greek independence from the Ottoman Empire, but did not succeed in obtaining Alexander’s support for the Greek revolution of 1821.[5] This put Kapodistrias in an untenable situation and in 1822 he took an extended leave of absence from his position as Foreign Minister and retired to Geneva where he applied himself to supporting the Greek revolution by organising material and moral support.[5]