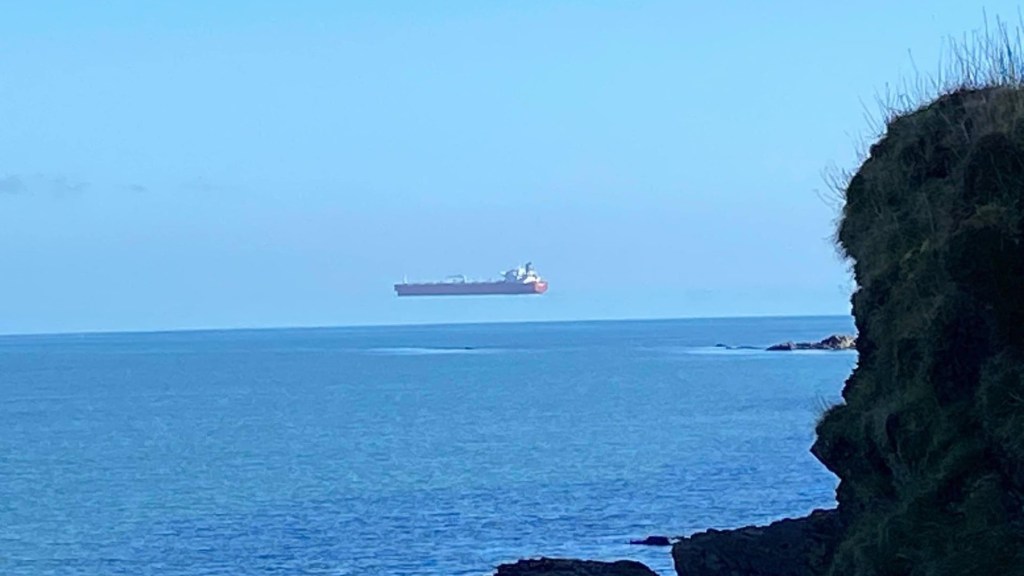 There are only so many polite words that come to mind when one spots a ship apparently hovering above the ocean during a stroll along the English coastline.

David Morris, who captured the extraordinary sight on camera, declared himself “stunned” when he noticed a giant tanker floating above the water as he looked out to sea from a hamlet near Falmouth in Cornwall.

The effect is an example of an optical illusion known as a superior mirage. Such illusions are reasonably common in the Arctic but can also happen in UK winters when the atmospheric conditions are right, though they are very rare.

Because cold air is denser than warm air, it has a higher refractive index. In the case of the “hovering ship”, this means light rays coming from the ship are bent downwards as it passes through the colder air, to observers on the shoreline. This makes the ship appear in a higher position than it really is – in this instance, above the sea surface.

“Superior mirages occur because of the weather condition known as a temperature inversion, where cold air lies close to the sea with warmer air above it,” said David Braine, a BBC meteorologist. “Since cold air is denser than warm air, it bends light towards the eyes of someone standing on the ground or on the coast, changing how a distant object appears.”

He added: “Superior mirages can produce a few different types of images – here a distant ship appears to float high above its actual position, but sometimes an object below the horizon can become visible.”

Photographers around the world have captured striking images of ships, yachts and other vessels apparently hovering in mid-air thanks to superior mirages. One potential clue that the sight is a mirage is the lack of any detail below the vessel’s waterline – for example a mirage of a “hovering” yacht lacked the lower hull and keel.

The latter effect is well known to sailors who can sometimes rely on refraction to spot ships that are geometrically beyond the horizon. Sailors say such ships are “looming” over the horizon and sometimes report distortions that stretch or compress the images, making them “towering” or “stooping” mirages, respectively.

More familiar optical illusions are the “inferior mirages” that give rise to apparent oases in the desert and puddles on hot summer roads. These mirages happen when cooler air sits on a layer of hot air, directly above a road, for example. When sunlight coming down from the sky approaches the air near the hot surface, it is bent back upwards to the observer’s eye, making the sky appear to be reflected on the road.