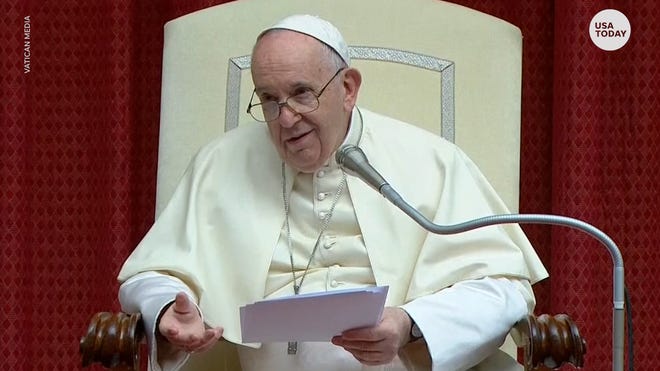 EDITOR’S NOTE (Nick Stamatakis):  Suddenly, Pope Francis and the Vatican reversed course and while a few months ago Pope Francis blessed gay “civil unions”, now they make a very clear statement against “same-sex unions” (full statement below)…  I was trying to understand it when I remembered that just a few days ago an AP story announced that “the Vatican was low on reserves and was seeking donations to cover their deficits”… The faithful obviously spoke with their wallets and stopped donating money… At the same time, a huge financial scandal was revealed and we learned that some had stolen a huge sum of money from the Vatican’s coffers…

Is anyone in Constantinople or in New York ready to learn a lesson from this story? The faithful certainly have learned their lesson and they have tightened their wallets… Why should they reward those who do not keep the faith? Why should they donate to unaccountable institutions?  Two years after the enthronement of AB Elpidophoros “transparency” and “accountability” are still empty words and wishful thinking – at the same time that GOA’s charter was suspended…

Well, let me say this one more time: Those who think that keeping control over our Church will bring them money are taking it the wrong way.  They will get money and support only with a growing and autonomous Church… If they keep the same course the money will dry up faster than they can imagine…

The Vatican’s orthodoxy office, the Congregation for the Doctrine of the Faith, said it was responding to questions about gay unions. The two-page statement published in seven languages was approved by Pope Francis.

“The blessing of homosexual unions cannot be considered licit,” the statement says, adding that “there are absolutely no grounds for considering homosexual unions to be in any way similar or even remotely analogous to God’s plan for marriage and family.”

The church and priests can still bless people who are gay who live in “fidelity,” the statement says. “Rather, it declares illicit any form of blessing that tends to acknowledge their unions.”

Francis DeBernardo, executive director of New Ways Ministry, an LGBTQ-centered Catholic ministry, told USA TODAY the statement was disappointing but not surprising. Catholics, he said, will continue to find creative ways to bless the couples they love and support.

“What the Vatican doesn’t realize is that the Catholic faithful are not satisfied with that answer,” DeBernardo said. “Catholic people recognize the holiness of the love between committed same-sex couples and recognize this love as divinely inspired and divinely supported and thus meets the standard to be blessed.”

Monday’s statement from the Vatican comes less than six months after revelations of Pope Francis’ stunning endorsement of same-sex civil unions were made public.

“Homosexual people have the right to be in a family. They are children of God,” Francis said in a 2019 interview for the documentary “Francesco.” “What we have to have is a civil union law. That way they are legally covered.”

Legally covered, but not church-sanctioned. Francis made the comment during an interview with a Mexican broadcaster, Televisa. It was cut by the Vatican but later appeared in a documentary.

Pope Francis endorsed same-sex civil unions. What does this mean for LGBTQ rights in the US?

Monday’s Vatican statement says God “never ceases” to bless all people, including people who are gay.

“But he does not and cannot bless sin,” the statement says. “He blesses sinful man, so that he may recognize that he is part of his plan of love and allow himself to be changed by him. … The Church does not have, and cannot have, the power to bless unions of persons of the same sex.”

Jim Bretzke, a priest, author and professor of theology at John Carroll University in Ohio, said the Vatican’s latest statement on the question appears to be attempting to “thread a needle” in its acceptance of gay people but not gay unions.

“The Church explicitly says gay men and women can be blessed,” he said. “But that the domestic union of a gay couple should not be liturgically blessed, lest people misinterpret this blessing as a form of Catholic marriage lite.”

Catholics generally are among the more accepting sects of Christianity when it comes to same-sex unions. A Pew survey found that more than half of Catholics in the United States, along with Mainline Protestants and Orthodox Christians, support same-sex marriage.

The pope has a complicated history with the LGBTQ community, specifically on same-sex marriage. As archbishop of Buenos Aires, Argentina, he endorsed civil unions for gay couples in lieu of same-sex marriages. Months into his papacy, he was quoted as saying: “If someone is gay and he searches for the Lord and has good will, who am I to judge?”

But Francis also has repeatedly condemned same-sex marriage during his time as pope – emphasizing the Catholic dictum of marriage remaining between a man and a woman in multiple statements.

“The declaration of the unlawfulness of blessings of unions between persons of the same sex is not … intended to be a form of unjust discrimination,” the statement Monday says. “But rather a reminder of the truth of the liturgical rite.”