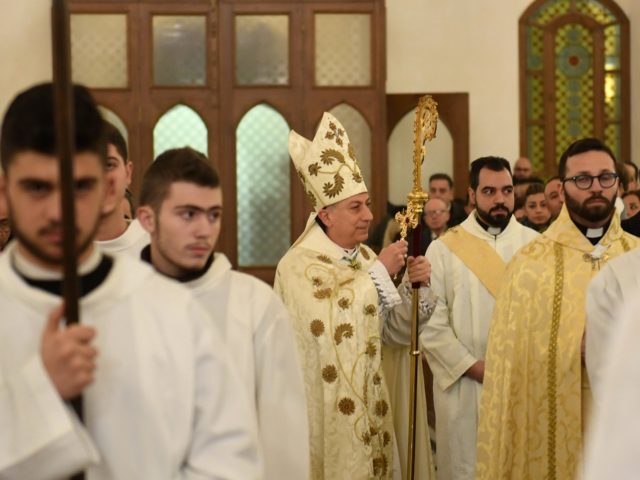 EDITOR’S NOTE (Nick Stamatakis): The Syrian Maronite Christian leader Archbishop Joseph Tobji of Aleppo cries out in desperation: “We feel abandoned by the international community”!!!  The Pope has made several supporting statements.  However, Patriarch Bartholomew’s position towards our Christian brothers in Syria was absolutely disgraceful… It constitutes one more example of his “compromised” position – thanks to which he cannot help Hellenism and Christianity in any area of conflict with the “Sultan” Erdogan… Well, let me note here that we have had many Patriarchs in the post WWII period but no-one have taken such low positions on issues regarding Hellenism and Orthodoxy.  Why? Because Pat. Bartholomew is compromised in many ways and he has no power to stand up to the Turks…

It is a disgrace… If it was not for President Putin, the Antiochean Church of Syria, the oldest of all Christian Churches, would not exist today… And Pat. Bartholomew DID NOT SAY A PIP…

The archbishop of Aleppo lamented Wednesday the Syrian people have been forgotten on the global scale and now feel completely on their own.

In an interview with Vatican News, Aleppo Archbishop Joseph Tobji of Aleppo said his people have given up hope for political resolution to the massive destruction that has occurred in Syria.

“We no longer have hope in human beings but only in the Lord,” the Archbishop said. “Now we feel abandoned by the international community.”

International sanctions against the country have only served to throw the country into further despair, he said, and now an estimated 83 percent of the population is living below the poverty line.

“The people have nothing to do with it and they always pay,” he stated.

As Breitbart News reported, last Sunday Pope Francis offered prayers for Syria while marking the tenth anniversary of a civil war that has left untold thousands of deaths in its wake and millions displaced.

“Ten years ago the bloody conflict in Syria began, which caused one of the most serious humanitarian catastrophes of our time,” the pope said following his weekly Angelus prayer.

The war, which began on March 15, 2011, has produced “an unknown number of dead and wounded, millions of refugees, thousands of disappeared, destruction, violence of all kinds and immense suffering for all the population, especially for the most vulnerable, such as children, women and the elderly,” the pope said.

While expressing his affection and offering prayers for the Syrian people, Francis also appealed for support from the international community to help rebuild the shattered country.

“I renew my heartfelt appeal to the parties to the conflict, so that they show signs of good will, so that a glimmer of hope can open up for the exhausted population,” he said.

“I also hope for a decisive and renewed commitment, constructive and supportive, of the international community, so that, once it has laid down its arms, we can mend the social fabric and start reconstruction and economic recovery,” he added.

In his interview Wednesday, Archbishop Tobji expressed gratitude to Francis for his words, saying that the pope’s closeness is a “joy and consolation” for Syrians in their feeling of abandonment.

The archbishop went on to note that the Christian community in Syrian has shrunk to less than a quarter of the number they had prior to the conflict. Many young people and professionals are fleeing the country, he said, while the poorest and most defenseless remain.

Despite the heaviness of the ordeal, the archbishop noted a few positive signs, such as the renovation of some churches in the country and plans for renovating even more.

“This is a sign that, despite many difficulties, we are still here,” he said.