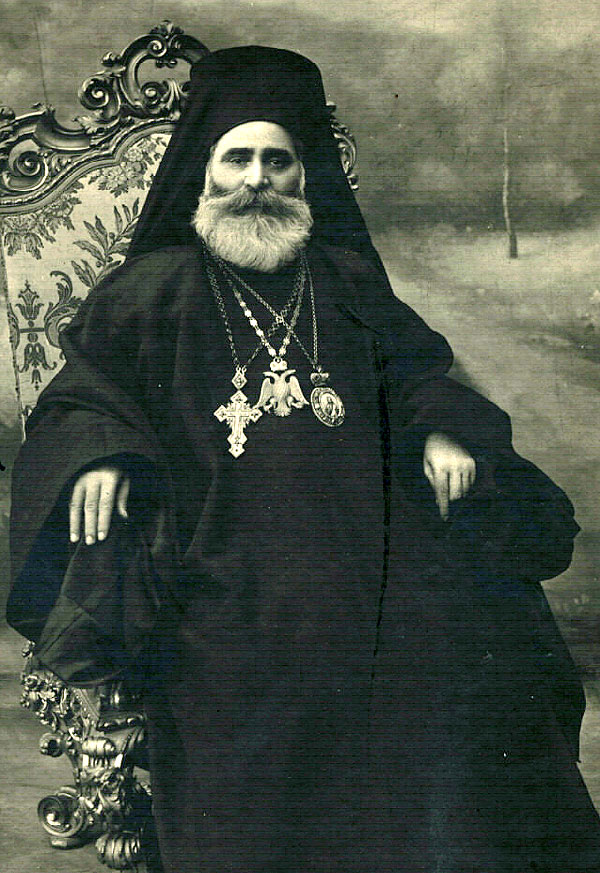 PHOTO: Meletios Metaxakis as a Patriarch of Constantinople.

EDITOR’S NOTE (Nick Stamatakis): As World Orthodoxy and Orthodoxy in America find themselves at a turning point, a look back at our history is always helpful in assessing the present situation.  It seems to me that most problems and questions that are now bothering all of us are associated with the personality of Meletios MeTaxakis.  In this brief biography that reads almost like a novel, the Orthodox reader will be amazed by the personality and the daring decisions of Metaxakis… He was involved (mostly directly as a leader but also indirectly) in five of the seven Churches that had apostolic succession (Constantinople, Greece, Jerusalem, Cyprus, Alexandria) but his impact on the Church of America seems to have been more profound of all of his involvements.  In 1908 the Constantinople Patriarchate had issued a Tomos of Autocephaly relinquishing any claim to any Church of the diaspora in favor of the Church of Greece and Metaxakis was here to organize the Church for the Greek Church – which he did!... The rest you can read below – but for now, let’s keep in mind that this Church was not supposed to be under Turkish influence, in any shape or form!…

In the early 20th century, no fewer than seven of the world’s Orthodox Churches had succession crises (Cyprus, Greece, Constantinople, Moscow, Alexandria, Antioch, and Jerusalem). Meletios Metaxakis was involved in five of them.

Meletios is best remembered for his tenure as Ecumenical Patriarch, but in fact he held that position for less than two years — elected in November 1921, enthroned in February 1922, left Constantinople in July 1923 and resigned that October (retroactive to September). Granted, he packed more into those 20-odd months than most Patriarchs would do in decades.

To some, Meletios is a hero, a visionary and progressive leader of Orthodoxy during a tumultuous period. To others, he’s the ultimate villain, a self-serving Freemason and enemy to Holy Tradition. But whatever you think of him, Meletios looms large over the history of Orthodoxy in the modern age. Today, I’m going to provide a very basic overview of his life.

The future Patriarch Meletios was born Emmanuel Metaxakis in Crete in 1871. When he was 18 years old, he moved to Jerusalem. There are different explanations for this move — I’ve heard that he participated in some kind of insurgency against the Turks in Crete, and I’ve also heard that he had a big fight with his father and left home. Of course, it’s possible that both stories are true.

Two years later, his spiritual father Archbishop Benjamin became Patriarch of Antioch (this was when Antioch was still controlled by the ethnically Greek Brotherhood of the Holy Sepulchre). Patriarch Benjamin tonsured Emmanuel a monk with the name “Meletios” and ordained him a hierodeacon. Meletios initially served in the Patriarchate of Antioch. He attended Holy Cross Seminary in Jerusalem, graduating in 1900. After his graduation at the age of 29, he became a member of the Brotherhood of the Holy Sepulchre and was appointed Secretary of the Holy Synod of Jerusalem.

Meletios traveled widely during this period, visiting Alexandria, Austria, and Russia. At this time, the Church of Cyprus was in the midst of a protracted succession crisis. Cyprus has been autocephalous since ancient times, but its hierarchy was never large, and by the early 20th century it was left with just two bishops — both named Kyrillos — who were contending to fill the vacant position of Archbishop. Neither would give way to the other, and in 1906 the Hellenic Patriarchates of Constantinople, Alexandria, and Jerusalem sent representatives to the island in an attempt to find a resolution. The 35-year-old Meletios represented the Patriarchate of Jerusalem.

Two years later, Meletios found himself persona non grata in his own Patriarchate. In the wake of the Young Turk Revolution of 1908, the Patriarch of Jerusalem was inclined to increase the involvement of the native Arab population in the Patriarchate, as a way to avoid future problems. Meletios seems to have opposed this, and he also seems to have been part of a failed plot to depose Patriarch Damianos of Jerusalem. Meletios was expelled from Palestine for “activity against the Holy Sepulchre.” He ended up in Istanbul. In 1910, he was elected Metropolitan of Kition. He was not yet forty years old. Shortly after his consecration, in March 1910, Meletios became a Freemason at the Harmony Lodge in Constantinople.

Meletios was a candidate for Ecumenical Patriarch in 1912 but was not elected. In 1918, he was elected Archbishop of Athens, thanks largely to his connection with the Greek Prime Minister Eleftherios Venizelos. That summer, Meletios traveled to the United States to organize the Greek Orthodox communities in America. 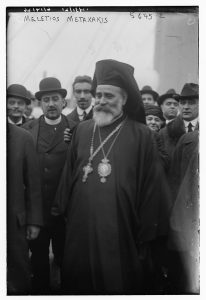 Back in 1908, the Ecumenical Patriarchate had issued a tomos relinquishing any claim to jurisdiction over the Greek diaspora in favor of the Church of Greece. This, incidentally, was the first time on record that Canon 28 of Chalcedon was used to justify a claim by the EP to any sort of general jurisdiction over territories not claimed by another autocephalous church. But this claim was in its infancy, applying, in the 1908 tomos, only to ethnic Greek communities rather than to all Orthodox irrespective of nationality. In any case, the Church of Greece didn’t send a bishop to America for a decade after the tomos, until the arrival of Archbishop Meletios and his friend Bishop Alexander of Rodostolon.

In the summer of 1918, Meletios and Alexander worked to organize the Greek-American communities into an archdiocese, and when Meletios returned to Greece after a few months, he left Alexander in charge of the fledgling Greek Archdiocese.

TO READ THE REST OF THIS WONDERFUL EXPOSE PLEASE FOLLOW THE LINK TO ORTHODOXHISTORY.ORG