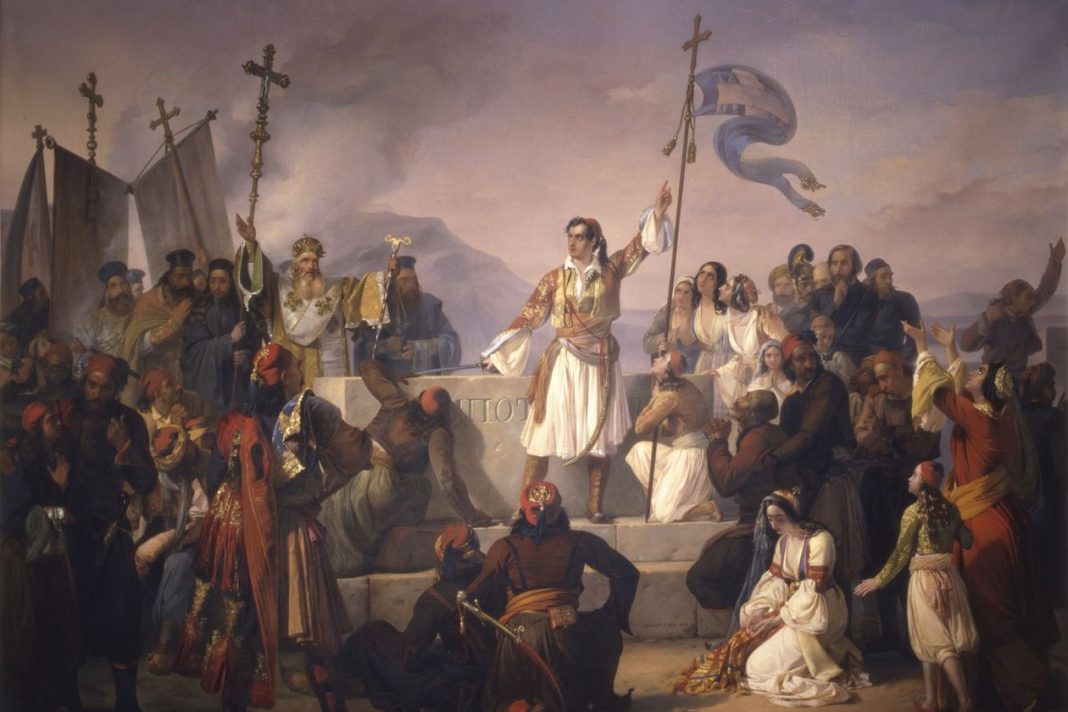 “All art is propaganda,” wrote George Orwell. This year Greece celebrates the bicentennial of its War of Independence against the Ottoman Empire, won with the help of some of the most powerful propaganda ever written. During a virtual conference on the east Mediterranean last November, New Jersey senator Robert Menendez quoted some of it: “The mountains look on Marathon—/And Marathon looks on the sea;/And musing there an hour alone,/I dream’d that Greece might still be free.”

Lord Byron wrote these lines in his poem “The Isles of Greece” just before the outbreak of the Greek Revolution. Revered today as a Greek national hero, Byron saw in the modern Greeks the flicker of ancient genius fallen on desperate times, and he wasn’t the only one. Percy Shelley and his wife, Mary Wollstonecraft Shelley, author of “Frankenstein,” were also famously Philhellenes. In Pisa they took Greek lessons from Alexandros Mavrokordatos, a Constantinopolitan Greek who would become the first president of independent Greece in 1822. The literary result of this relationship was Shelley’s verse play “Hellas,” written to help finance the Greek cause, which portrayed the Greeks as re-emerging from antiquity: “The world’s great age begins anew,/The golden years return.”

Educated Europeans and Americans saw “something of their own at stake because they’ve been brought up on Homer and Herodotus and Marathon and Salamis,” said Roderick Beaton, professor emeritus of Byzantine and Modern Greek literature at King’s College London. “It’s not humanitarian, it’s not altruistic…it’s actually the belief that the Hellenic heritage is common to all civilized people and therefore…it’s your own civilization that is threatened by the common enemy.” Small wonder, perhaps, that many hundreds of Europeans paid their way to fight for the Greek cause.

But it is Byron whose reputation was entirely tied up with Greece. He had traveled there a decade before the revolution and written the first two cantos of his long poem “Childe Harold’s Pilgrimage,” in which his hero calls the Greeks to rebellion: “Hereditary bondsmen! Know ye not/Who would be free themselves must strike the blow?” “Childe Harold” became a publishing sensation in 1812, selling out 10 editions in three years—a record unmatched in English poetry—and propelling Byron to rock star status.

When Byron landed in Messolongi in 1823 to devote his life and fortune to the Greek cause, his arrival “directed the attention of all Europe to the affairs of Greece,” wrote his contemporary and historian of the Greek War of Independence, George Finlay. Upon his death from fever a mere four months later, “wherever the English language was known, an electric shock was felt.”

That shock was accentuated by the fall of Messolongi to the Turks two years later, with the loss of thousands of civilian lives. “These two events immediately became entangled in the popular imagination,” said Prof. Beaton. “There were poems and plays and novels and an opera all inspired by the fall of Messolongi in 1826….People confused the two, so that there was an assumption that Byron had died in the final fight for Messolongi.”

The fall of Messolongi appeared to spell the end for the revolution. In Paris, the young Eugene Delacroix painted “Greece on the Ruins of Messolongi” in the form of an almost bare-breasted young woman standing on fallen masonry and corpses, her palms turned to the viewer, like an on-camera reporter showing the brutality unleashed by the Ottomans.

That should have been that. The Serbian and Spanish national revolutions had failed because, like the Greeks, they had sought their independence inopportunely—six years after Waterloo, when the great European powers were bent upon conserving peace and looked unfavorably upon revolution.

The Greeks were also hopelessly outgunned. Before the might of Sultan Mehmet’s professional army and navy, they could field only brigands, skirmishers and fire ships. They had no cavalry, no military navy, no experienced military officers, no central command, no money and barely a central government.

The Greeks succeeded partly because their revolution aroused the greatest sympathies abroad.

But they succeeded partly because their national revolution aroused the greatest sympathies abroad. “The two great allies of the Greeks are religion and the relationship with ancient Greece,” said Thanos Veremis, professor emeritus of history at Athens University. Images of Christian underdogs mauled by Muslim overlords resounded with Europeans, and “the Europeans were more or less convinced that this was a case of revival of ancient Greece.”

Greece’s plight and soft power alone did not ensure success. A geopolitical argument achieved that, articulated by Mavrokordatos in a pamphlet penned before the revolution and in later correspondence with British foreign secretary George Canning. He made the case that the Ottoman Empire was in terminal decline, and it was in the interests of the Western powers to support an independent Greece against Russian influence.

The argument worked. Britain, France and Russia agreed to secure Greek autonomy in the London Protocol of 1826, and ultimately secured the country’s independence by decimating the Ottoman navy at the Battle of Navarino in 1827.

Greece became the first European nation-state forged in the values articulated by the U.S. Declaration of Independence. “Setting up a new state according to enlightenment principles [is] what the Greeks did for the first time. No one else had done it. The French had tried and been defeated,” says Prof. Beaton. “To create such a state at all…out of the materials that existed before 1821 is an extraordinary feat for which the Greeks deserve far more credit than they’re routinely given.”

—Mr. Psaropoulos is an independent journalist based in Athens. He is the Southeast Europe correspondent for Al Jazeera. His blog is www.thenewathenian.com.