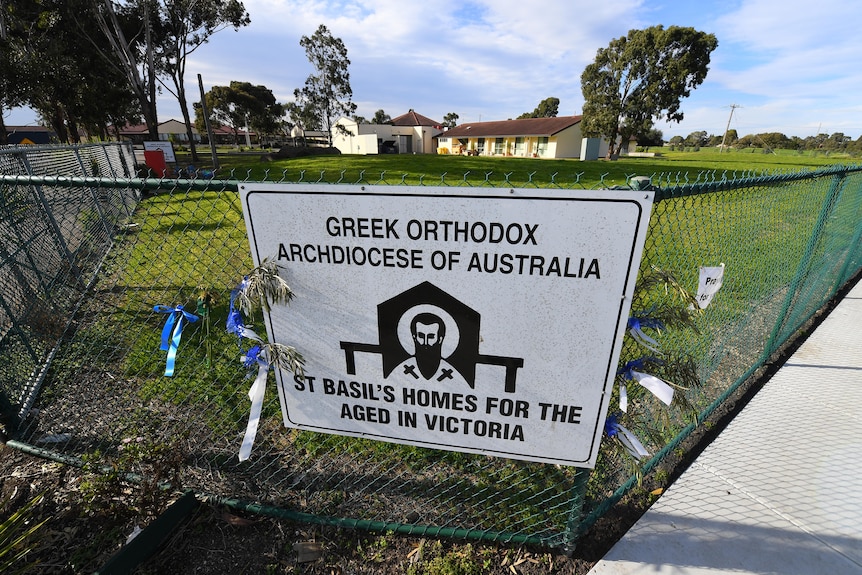 The homes include St Basil’s in Melbourne, where 45 residents died in Australia’s deadliest COVID outbreak.

In the past eight years, St Basil’s paid more than $22 million in rent and fees to the Greek Orthodox Archdiocese while receiving federal government funding.

Towards the end of that period, the church was funding the lavish lifestyle of its newly appointed Archbishop, including the purchase of a $6.5 million Sydney apartment with harbour views.

A vow of poverty

Archbishop Makarios, who oversees the church’s schools, parishes and aged care homes, arrived on Australia’s shores in the middle of 2019 to much fanfare.

He was swamped by thousands at his enthronement in Sydney and photographed meeting the Prime Minister along with other political and business leaders.

“Until the end of my life, I belong to Australia,” he declared, choking back tears.

But as he toured the country in his first months in charge, some in the church noted his lifestyle seemed excessive for a man who had taken a vow of poverty.

He was arriving at parishes in a black Holden Caprice with dark tinted windows, a flag and a personalised number plate ordered just for him: ARCHBM.

His ceremonial gowns of luxurious silks and wool in vivid hues, embroidered with gold thread, cost up to $30,000 each, according to sources linked to the church.

They were a stark departure from the conservative black cotton garments worn by his predecessor, the late Archbishop Stylianos.

Then in December 2019, the church bought him a new official residence in Millers Point, a luxurious apartment with sweeping views of Sydney Harbour and the Opera House.

It provoked outrage among the faithful, so in mid-2020 the Archdiocese issued a statement denying the Archbishop was living in the apartment.

The Archdiocese has now confirmed he moved in earlier this year.

Sources say before he moved in, a $3 million renovation was carried out.

The church said the renovation was paid for by a private donor.

The Archdiocese dismissed questions about the Archbishop’s lifestyle as “discourteous and ill-founded”, but concerns persist that funds from the Greek Orthodox Church’s aged care homes are helping to pay for it.

Background Briefing has uncovered an extensive network of residential and commercial properties around Australia owned by the Greek Orthodox Archdiocese and overseen by the Archbishop.

Some of the church’s aged care homes are passing money directly back to the church, with a total of $31 million transferred in the past eight years, often while homes are posting operating losses.

“One thing that pops out immediately on the St Basil’s filings is the amount of rent paid to the church,” said Jason Ward, an aged care expert from the Centre for International Corporate Tax Accountability and Research, who examined St Basil’s financial disclosures for the ABC.

“There are other operating expenses which are never explained or classified. What is disclosed is that a portion of that is fees to the Greek Orthodox Church.

“Taxpayers’ money, which is intended to provide care for elderly Australians, is subsidising the church.”

St Basil’s has received nearly $73 million in taxpayer funding over the past eight years.

According to one source who spoke to Background Briefing on condition of anonymity, the Archdiocese views its aged care homes as “fat children” and itself as a “starving mother”.

The Archdiocese declined to answer any questions about the money it receives from its aged care homes.

In July last year, Maria Vasilakis’s family stood outside St Basil’s in Melbourne watching through a window as she celebrated her birthday.

Two days earlier, the aged care home had recorded its first case of COVID-19 and was now in lockdown.

Maria’s daughter filmed as two friendly staff members handed her flowers and a box of chocolates, neither wearing PPE.

Within a week, Maria had tested positive for the virus and six days later, she was dead.

According to Maria’s son Spiros Vasilakis, even before the deadly covid outbreak there were signs things were not right at St Basil’s.

“They were serving party pies and little sausage rolls for dinner with no salad or veggies,” he said.

He said a manager told his family, “At least it’s not dog food … they’re used to it because they used to work in factories.”

Mr Vasilakis said the home’s recordkeeping was “old school”, a cause of frequent frustrations for families which became catastrophic when the outbreak hit.

Relief staff could not find medical records or even identify residents.

Rob, a trainee nurse who worked as a contractor at St Basil’s during the outbreak, told Background Briefing he saw evidence of severe neglect.

Rob recalled how a patient’s catheter bag had not been emptied in so long the urine had turned “almost black” while another had an infection so severe it “felt like the person was rotting, literally”.

“People need to know there’s more going on here than a COVID outbreak … it was inevitable the virus would spread through this place.”

He described missing medical records, clinical waste strewn through the home and stonewalling from the St Basil’s leadership at the height of the crisis.

The problems had started long before that, he said.

The home had no pager system, “so when residents press their call bell for assistance … nothing.”

“They had no bed sensors, no equipment. I don’t know how they operate,” he said.

Spiros Vasilakis holds the church responsible for what happened to his mother at St Basil’s.

“I think it comes back to that it’s a money-spinner, that’s all it was for. Forty-five people are dead because of pure negligence. All of that points to they just didn’t care.

“I might still have faith in my religion, but not in its church or its representatives,” Mr Vasilakis said.

St Basil’s Victoria declined to comment because it is being sued over the deaths.

Listen to Background Briefing’s podcast The Archbishop, the luxury pad and the COVID-ravaged aged care home.