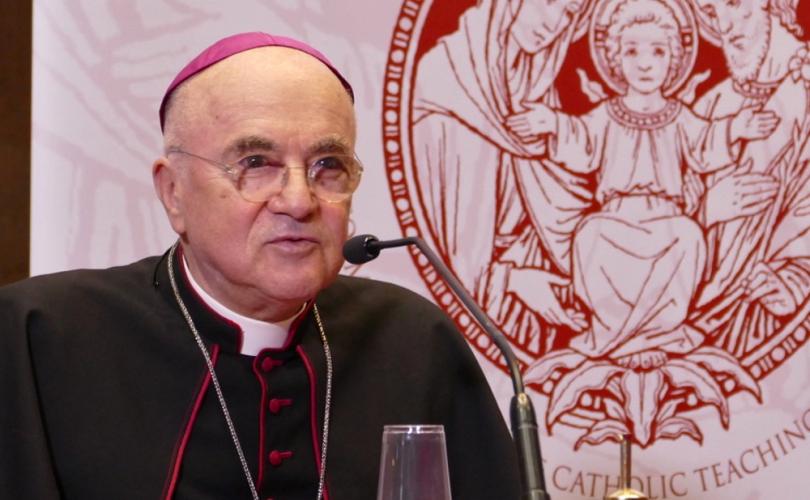 The result is the super-imposition over the true Church of a sect of heretical and depraved Modernists who are intent on legitimizing adultery, sodomy, abortion, euthanasia, idolatry, and any perversion of the intellect and will. The true Church is now eclipsed, denied and discredited by her very Pastors, betrayed even by the one who occupies the highest Throne.

From May 6-8, 2021, the fifth International Vatican Conference will take place, entitled Exploring the Mind, Body & Soul. Unite to Prevent & Unite to Cure. A Global Health Care Initiative: How Innovation and Novel Delivery Systems Improve Human Health. The event is being hosted by the Pontifical Council for Culture, the Cura Foundation, the Science and Faith Foundation, and Stem for Life.

Michael Haynes of LifeSiteNews has reported (here) on the topics to be addressed and the participants, including the infamous Anthony Fauci, whose scandalous conflicts of interest did not prevent him from taking over the management of the pandemic in the United States; Chelsea Clinton, a follower of the Church of Satan and a staunch abortion advocate; the New Age guru Deepak Chopra; Dame Jane Goodall, environmentalist and chimpanzee expert; the CEOs of Pfizer and Moderna; representatives of Big Tech; and a whole slew of abortionists, Malthusians, and globalists known to the general public. The conference has recruited five prominent journalists to be moderators, who are exclusively from left-wing media outlets such as CNN, MSNBC, CBS and Forbes.

This Conference – along with the Council for Inclusive Capitalism of Lynn Forester de Rothschild, the Global Compact on Education, and the inter-religious Pantheon to be held in June in Astana, Kazakhstan – is the umpteenth scandalous confirmation of a disturbing departure of the current Hierarchy, and in particular its highest Roman members, from Catholic orthodoxy. The Holy See has deliberately renounced the supernatural mission of the Church, making itself the servant of the New World Order and Masonic globalism in an antichristic counter-magisterium. The same Roman Dicasteries, occupied by people ideologically aligned with Jorge Mario Bergoglio and protected and promoted by him, now continue unrestrained in their implacable work of demolishing Faith, Morals, ecclesiastical discipline, and monastic and religious life, in an effort as vain as it is unprecedented to transform the Bride of Christ into a philanthropic association enslaved to the Strong Powers. The result is the super-imposition over the true Church of a sect of heretical and depraved Modernists who are intent on legitimizing adultery, sodomy, abortion, euthanasia, idolatry, and any perversion of the intellect and will. The true Church is now eclipsed, denied and discredited by her very Pastors, betrayed even by the one who occupies the highest Throne.

The fact that the deep church has managed to elect its own member so as to carry out this infernal plan in agreement with the deep state is no longer a mere suspicion, but a phenomenon which it is now essential to ask questions about and shed light on. The submission of the Cathedra veritatis to the interests of the Masonic elite is manifesting itself in all its evidence, in the deafening silence of the Sacred Pastors and in the bewilderment of the People of God, who have been abandoned to themselves.

Further demonstration of this degenerate libido serviendi of the Vatican towards the globalist ideology is the choice of speakers to give testimonials and lectures: supporters of abortion, of the use of fetal material in research, of demographic decline, of the pan-sexual LGBT agenda, and last but not least, of the narrative of Covid and the so-called vaccines. Cardinal Ravasi, the President of the Pontifical Council for Culture, is certainly one of the leading representatives of the deep church and Modernist progressivism, as well as an advocate of dialogue with the infamous Masonic sect and a promoter of the famous Courtyard of the Gentiles. It is therefore not surprising that included among the organizers of the event is the Stem for Life Foundation, which proudly defines itself as “a nonsectarian, nonpartisan, tax-exempt organization focused on creating a movement to accelerate development of cell therapies.”

On closer inspection, the sectarianism and partisanship of the Vatican Conference are made evident by the topic it addresses, the conclusions it seeks to draw, its participants, and its sponsors. Even the image chosen to promote the Conference is extremely eloquent: a close-up of Michelangelo’s fresco of Creation on the Sistine Chapel ceiling, in which the hand of God the Father reaches out towards the hand of Adam, but with both hands covered by disposable surgical gloves, recalling the regulations of the new “health liturgy” and implying that even the Lord Himself might spread the virus.

In this sacrilegious representation, the order of Creation is subverted into therapeutic anti-creation, in which man saves himself and becomes the mad author of his own health “redemption.” Instead of the purifying laver of Baptism, the Covid religion proposes the vaccine, the bearer of disabilities and death, as the only means of salvation. Instead of Faith in the Revelation of God, we find superstition and the irrational assent to precepts that have nothing scientific about them, with rites and liturgies that mimic true Religion in a sacrilegious parody.

This choice of imagery has an aberrant and blasphemous ring to it, because it uses a well-known and evocative image to insinuate and promote a false and tendentious narrative that says that in the presence of a seasonal flu, whose virus has still not been isolated according to Koch’s postulates (here) and that can be effectively cured using existing treatments, it is necessary to administer vaccines that are admitted to be ineffective and that are still in the experimentation phase, with unknown side-effects, and whose producers have obtained a criminal shield of immunity for their distribution. The victims immolated on the altar of the health Moloch, from children dismembered in the third month of pregnancy in order to produce the gene serum to the thousands of people who have been killed or maimed, do not stop the infernal machine of Big Pharma, and it is to be feared that there will be a resurgence of the phenomenon over the next few months.

One wonders if Bergoglio’s zeal for the dissemination of the gene serum is not also motivated by base economic reasons, as compensation for the losses suffered by the Vatican and the Dioceses following the lockdown and the collapse of attendance by the faithful at Mass and the Sacraments. On the other hand, if Rome’s silence about the violation of human and religious rights in China has been paid for by the Beijing dictatorship with substantial prebends, nothing prevents the replication of this scheme on a large scale in exchange for the Vatican’s promotion of the vaccines.

The Conference will obviously take great care not to mention even indirectly the perennial teaching of the Magisterium on moral and doctrinal questions of the greatest importance. Conversely, the sycophantic praise of the worldly mentality and the prevailing ideology will be the only voice, along with the amorphous ecumenical repertoire inspired by the New Age.

I note that in 2003 the same Pontifical Council for Culture condemned yoga meditation and, more generally, New Age thought as being incompatible with the Catholic faith. According to the Vatican document, New Age thought “shares with a number of internationally influential groups the goal of superseding or transcending particular religions in order to create space for a universal religion which could unite humanity. Closely related to this is a very concerted effort on the part of many institutions to invent a Global Ethic, an ethical framework which would reflect the global nature of contemporary culture, economics and politics. Further, the politicization of ecological questions certainly colors the whole question of the Gaia hypothesis or worship of mother earth” (2.5). It goes without saying that the pagan ceremonies with which Saint Peter’s Basilica was profaned in honor of the Pachamama idol fit perfectly into that “politicization of ecological questions” denounced by the 2003 Vatican document, and which today is instead promoted sine glossa by the so-called Bergoglian magisterium, beginning with Laudato Sì and Fratelli Tutti.

At La Salette, Our Lady warned us: “Rome will lose the Faith and become the seat of the Antichrist.” It will not be the Holy Church, indefectible by the promises of Christ, that will lose the Faith: it will be the sect that occupies the See of Most Blessed Peter and which today we see propagating the anti-gospel of the New World Order. It is no longer possible to remain silent because today our silence would make us accomplices of the enemies of God and of the human race. Millions of faithful are disgusted by the countless scandals of the Pastors, by the betrayal of their mission, by the desertion of those who by Holy Orders are called to bear witness to the Holy Gospel and not to support the establishment of the kingdom of the Antichrist.

I beg my Brothers in the Episcopate, priests, religious, and in a particular way the faithful laity who see themselves being betrayed by the Hierarchy, to raise their voices so as to express with a spirit of true obedience to Our Lord, Head of the Mystical Body, a firm and courageous denunciation of this apostasy and its authors. I invite everyone to pray that the Divine Majesty may be moved to compassion and intervene in our aid. May the Most Holy Virgin, terribilis ut castrorum acies ordinata, intercede before the Throne of God, compensating with Her merits for the unworthiness of Her children who invoke Her with the glorious title of Auxilium Christianorum.