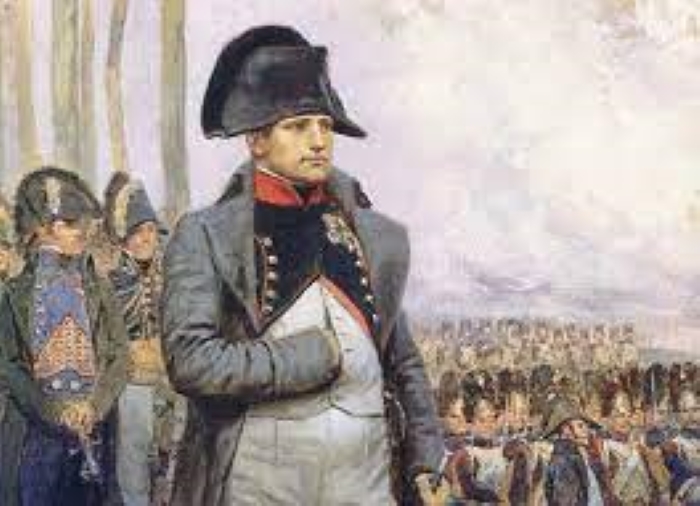 EDITOR’S NOTE: This is not simply the love affair between Napoleon and a beautiful Greek lady, but the love affair between France and Greece, which paved the way for the liberation of the country.  This love affair was in essence prepared by Napoleon’s familiarity with the Greeks from Mani who had a few generations earlier migrated to his homeland of Corsica to escape the Ottomans.  This close connection was only the latest episode in a 3,000 back and forth between Southern France (the now-famous “Cote d’ Azur”) and Greece, where major ports Nice (Nikaia) and Marseilles (Massalia), among others, were ancient Greek colonies…

Enjoy it!! It reads like a beautiful novel… And it continues next week…

GREEK HISTORY and the Greeks played an important role in the life of the French emperor Napoleon Bonaparte, from his cradle in Corsica, his studies at the Military Academy in Paris, his wars until his exile in the island of Elva, where his campaign began for his last reign, the “One Hundred Days” (March – June 1815). From his first great victorious campaign, in Italy, against the state of Austria, in 1797, until the eve of 1821, the Greeks based their hopes for the overthrow of the Ottoman yoke on Napoleon and his “boots on the ground”.

In fact, in the summer of 1797, when Napoleon, after defeating the Republic of Venice, sent an army to the Ionian Islands and liberated them from Venetian occupation for six centuries, the hopes of the Greeks were multiplied. They began to become “flesh and blood”.

The most important Greek of the pre-revolutionary period, who turned to Napoleon to strengthen his liberating plans for Hellenism, was Rigas Velestinlis, for whom, in fact, many writers suggest that the two men actually met. However, the quick end of the Greek revolutionary put an end to this interpersonal relationship as well.

The next Greek leader to communicate with Napoleon was Zacharias Varbitsiotis (ancestor of the former minister Ioannis Varvitsiotis) to whom Napoleon sent a shipment of arms.  Varvitsiotis was the archenemy of the Ottomans and the General leader of the Peloponnese around the end of the 18th century.

After the assassination of Varbitsiotis by the Turks, who, apparently informed of the arrival at Peloponnese of the French military aid, both Colocotronia and Farmakis sought to meet in person Napoleon, in 1808. They reached as far as Corfu, but the French commander of the Ionian Islands, Danzelot, who was present there, wanted to take part in the glory of the strengthening of his country’s relations with the Greeks and kept Colocotronis and Farmakis there together so that they work out the details of the French-Greek alliance and the establishment of a Greek-Albanian state, under the protection of Napoleon. This was the proposal of Kolokotronis – Farmakis, which did not proceed, however, because the Ionian Islands in the meantime were occupied by the British.

One of the last persons of Greek origin, with whom, however, Napoleon met and had a common and stormy, multi-month, perhaps even seven-year relationship with, was a beautiful Greek woman from Constantinople, Adelaide, last great love of the French warrior.

Her name was Adelaide Theologou, wife of a Phanariot, old diplomat of the sultan. With her, Napoleon had a son, who did not take the surname of his father, Bonaparte, as it also happened with the son he acquired with his other mistress, the Polish aristocrat Valefska, in order not to create problems for his legitimate son, which he had with his second wife, Princess Maria-Louise. The son of Napoleon and Adelaide, George, kept his mother’s surname, “Theologou”.

However, when in 1850, the nephew of Napoleon, Napoleon III, became Emperor, he helped the son of his glorious uncle and the Greek Adelaide, who was a military man, to reach the rank of general in the army. This fact was a clear recognition of the relationship of Napoleon the Great with the Greek aristocrat of Fanar.

The revelation of Napoleon’s romantic affair with Adelaide was made by an eminent journalist, editor, and historian Kostas Athanatos, member of the French Academy of History, holder of “Excellence of Arts and Letters” of France, and member of the Greek delegation to the Conference of Peace of Paris, 1946, who wrote in his biography of Napoleon in the Encyclopedia of “Helios” that Adelaide:

Our personal assessment is that after France, and especially Corsica, a special place in the heart of Napoleon was occupied by the Greek element.

From his childhood, in his rather poor family home, in Ajaccio, the capital of Corsica, Napoleon heard Greek names and Greek stories, because of the daily visits to the family of Bonaparte, of the family of Stephanopoulos who lived in the same neighborhood and came from Mani (Laconia, Greece). One of the ladies of the Stefanopoulos family, Panoria, became a personal friend of Napoleon’s mother, Leticia. Two Stefanopoulos siblings, about the same age as Napoleon, became his lifelong friends and were used by him when he was on the Italian-Austrian front, on a mission to their ancestral homeland. Their name is Dimos and Nicholas Stefanopoulos, both doctors…

Another Stefanopoulos, Dimitrios, of the previous generation, a descendant of the Stefanopoulos who arrived in Corsica, political refugees, seeking to avoid the Turkish troubles in their homeland, was an officer of the French Army and reached the rank of general. It seems that he was the one who influenced Napoleon to follow the military career, because after the introduction of the young Corsican, among the first, to the Military Academy of Paris, Dimitrios Stefanopoulos signed the necessary by the law statement, that he was his legal guardian… It was likely him who guided Napoleon in the study of ancient Greek history and literature. The Trojan and the Persian wars against the Greeks, Homer, Hesiod, but also Solon, and the theater writers of the 5th century BC, were the most beloved readings of Napoleon, a voracious reader since his early youth.

The fall of Byzantium to the Ottomans and the ongoing sufferings of the Greeks – the Stefanopoulos themselves were considered descendants of the royal Byzantine family of the Komnenoi, who had taken refuge in Mani – must also played a role in his vision of the liberation of the Greeks, for whom he had deep respect and admiration.

“The Greeks are invaluable and you must use them,” he often advised his defender, General Zino, who, apparently influenced by the sympathy of his great friend, a mercenary, for the Greeks, married a young woman, a neighbor of Napoleon in Ajaccio, Laura Stefanopoulou, daughter of Panoria, and thus entered the circle of friends of the later emperor. Fighting in northern Italy against the Austrians, in 1797, Napoleon received a letter from the Greek bey (presiding leader) of Mani, Tzanetos Grigorakis, in which he called the French general to liberate Greece from the Ottomans. The Peloponnesian prince stated to Bonaparte that he made available to the French fleet the ports of Mani, in order to attempt a landing.

Napoleon, who did not yet have political powers, forwarded Grigorakis’ letter to the French government in Paris, while he addressed a personal letter to Grigorakis, in which he called him the “Leader of the Free People of Mani” and he stressed that he expected from him, as a genuine descendant of the Spartans, to keep his promise to make the ports of Mani available to the French fleet. The letter was sent to Grigorakis by his two friends, the Corsican brothers, Dr. Stefanopoulos, Dimos and Nikolas (in this regard, Dr. Ἀristeidou Dimopoulou, former Undersecretary, researcher of the French archives and author of the book -1827 “, published by” Papyrus “, and periodical HISTORY vol. 6, December 1968.)

Apart from Dimopoulos, the French Archives have been researched, especially for the relations of Mani with Corsica, by the former director of the history department of the Academy of Athens, Dikaios Vagiakakos.

Napoleon acted at that time with the spirit and letter of the French National Assembly of 1792, stating: “The French nation will offer brotherhood and help to all the peoples who wish to liberate themselves and gives the necessary orders to the French Generals to help these peoples… »(Arist. Dimopoulos, p. 65.)

At the same time, French sailors landed on the Ionian Islands and brought to the Greek people the declaration of freedom and democracy, after six centuries of occupation by Venice. The enthusiasm of the Greeks was beyond description!..

In Corfu (June 29, 1797) the Metropolitan George Halikiopoulos Mantzaros offered to the Corsican friend of Napoleon, apparently chosen by him as the leader of the French navy, the general Anselmo Gentili, Homer’s “Odyssey” (Eleni E. Koukkou “History of the Ionian Islands”, “Papadimas” publications.) “The fact”, writes the late professor Koukkou, surprised Napoleon himself, who describes it in a letter to the Directorate of the French Revolution (August 1797).

On July 5, 1797, the “tree of freedom” was planted in the square of Corfu and the flag of Saint Mark (of Venice) was set on fire. Similar events took place in all the Ionian Islands and everywhere the people burned the Libro d’Oro of the local aristocracy.

“Everywhere, among the songs that people sang, was “Thourios” by Rigas.  In all public documents, the phrase “First year of the freedom of the Greeks” was written above them (the name “Greeks” was introduced a few years later.)

During his campaign against Egypt with his fleet, Napoleon stationed at Loutro Sfakion, where he received a large number of ruthless Cretan warriors. Other Greeks from Asia Minor and the Aegean islands also arrived in Egypt. With them was formed the famous “Greek Legion” that fought on the side of Napoleon in the Egyptian deserts and especially in the famous “Battle of the Pyramids”.

One of the Greek officers, the infamous Nikolaos Papazoglous, was a prominent member of the Napoleonic Army, hoping that the help that the Greeks provided would be appreciated by the French who would send the future French’s Expeditionary Force for the liberation of their homeland. Later, probably after the defeat and exile of Napoleon in 1814, Papazoglou enlisted in the Russian army and was appointed commander of his fleet on the Danube. He was recruited by the “Society of Friends” (Filki Etaireia) and was one of the main advisers of Alexander Ypsilanti.

In Egypt, Papazoglous offered enormous services to Napoleon, because with his fleet, of Greek ships and Greek sailors, he kept open the lines of communication with the French naval bases, while with his Greek infantry forces, he assisted in their land enterprises in the Egyptian deserts. Another Greek officer who contributed with his Greek units to the French military successes in Egypt was Bartholomew Serras, whom Napoleon called, in French, “Barthelemy Serra”. Many of the Greek officers of the staffs of Papazoglou and Serra remained in the French army and fought on Napoleon’s side in almost all of his campaigns. One of the Greeks who toiled for Napoleon was a Marine from Kefalonia – postman Sotirios Vourvachis, truly a “winged Hermes”.

Vourvachis, with a boat of his own construction, started from Marseilles and transported it to Egypt, breaking its English naval blockade, a particularly serious – top-secret message from Joseph and Lucian Bonaparte,

Deeply grateful by his Greek collaborators Napoleon, but also an admirer of the deeds of Miltiades and Themistocles, he will include the liberation of Greece in his plan for an alliance with Russia, which formed the basis of his agreement with Russian Czar, Paul A’. With it, Europe was divided between the two great powers in spheres of influence, and Greece was considered one of the states created by its provisions. This agreement was apparently the cause of Paul’s strangulation in his bed on the night of March 11, 1801.

The defeat of Napoleon at Waterloo in June 1815 marked the end of his political and military activities until his death in May 1821.

Next Week: The great secret of the Adelaide Theologou.