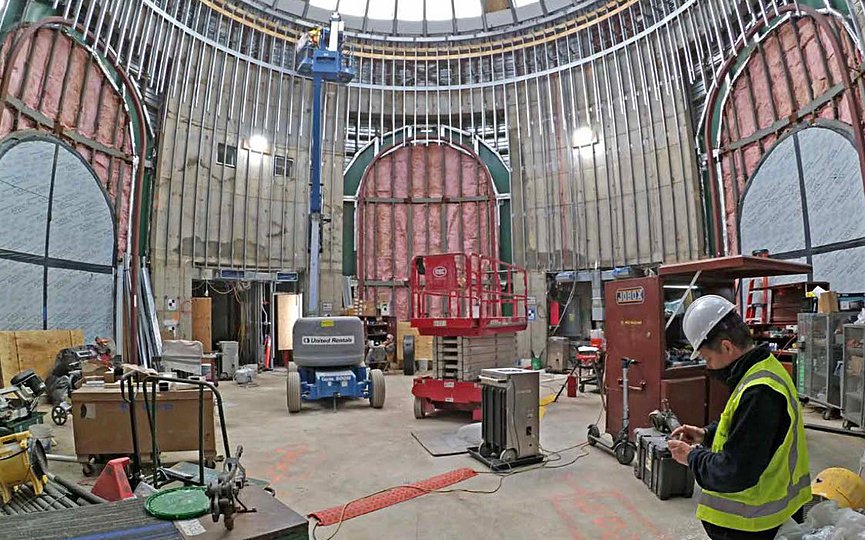 Judging by the desperate recent statements by the “Friends of St.Nicholas,” it is now clear that the “Shrine” will not be finished on time for the 20th anniversary of 9/11 – one more step in a series of delays for the troubled project. Characteristically, Michael Psaros, in a statement during Holy Week 2021, applauded the “progress” made, stating that “we are on time,” only to shamelessly declare in the next sentence that “the interior of the Shrine will be completed by April 2022…”  This must have been the n-th delay in a series of problems that turned a 35 ft tall building into an $85,000.000 boondoggle… You can have a taste of the desperation in the photos below: 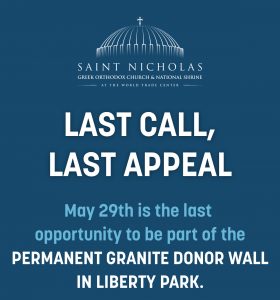 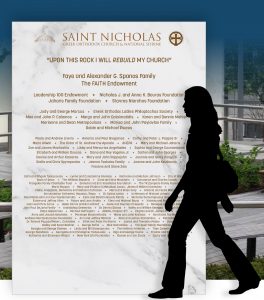 PHOTO ON THE RIGHT IS OF THE DONOR WALL (Question: There was special permission given by the Port Authority to put the Donor Wall on the Southside of the Shrine, and if you enlarge the photo, you will see that almost all the donors are of Greek descent.  But there was no space for the American and Greek Flags? Couldn’t we get permission for these also?)

After writing and contemplating about St. Nicholas for several years, it seems to me that something bigger is going on here, something that we cannot grasp simply by our logic and our senses… Just think about it: All major actors in rebuilding Saint Nicholas were, in a span of a few years, reduced to practical nothingness.  Why?

Rebuilding actually started on October 18, 2014, and it was supposed to finish in two years.  I remember the beautiful sunny fall day and the optimism surrounding the groundbreaking ceremony.  We were all elated, and yours truly had written a short piece in English and Greek celebrating the moment and underlining the message of humility and selflessness symbolized by the “Ecumenical” Saint Nicholas (It was published online – you can read it here SAINT NICHOLAS AN ECUMENICAL SAINT ENGLISH AND GREEK) – photo from that day below… 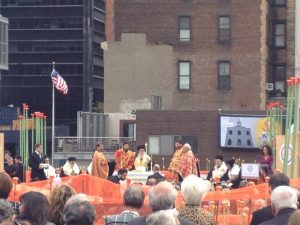 What we witnessed on that beautiful day depicts the magnitude of the problem today. We were attending the ceremony standing on the concrete platform that was provided FOR FREE by the Port Authority of NY & NJ to the GOA so we can raise the 35 ft building designed by Santiago Calatrava.  This fact alone is very telling: You do not need to be a builder to understand that having the platform (and all AC and mechanical/electrical work already done and paid for) for free was half the cost of the whole project.  I have heard that actual builders made proposals to finish the rest of the project for just $4-5 million.  Others have offered the iconography for free – but Karloutsos rejected them!  We were to build a 35ft Church – even if the whole Church were encased in gold, it would never cost $85 million!! I have even heard recently that there was a proposal for the Port Authority to assume the full cost – but never materialized due to unholy interventions from GOA, who apparently used the project for endless fundraising – as they do even today… I still have to verify this specific proposal. After what we have seen, it seems very plausible (it might have been part of the various negotiations between the Port Authority and GOA that lasted years…)

What we have seen is the disappearance of millions of dollars in all directions and allegedly towards the Constantinople Patriarchate and most surely as a “fundraising fee” for Karloutsos – who still to this day cannot admit the truth – that he was actually getting a fundraising fee in one form or another. Parenthesis: Yes, “father”, it may not have been in cash directly into your bank account (on which you would have to pay income tax), but it was in the form of (among other ways) hefty salaries for your presbytera and your son and ample credit card use for all three of you (and not sure who else in the “family”…)  Let me remind all of you that the federal investigation is still going on…

As I said above, what transpired between 2014 and now cannot be grasped by logic.  A project that was touted initially to attract a potential 30 million visitors annually (while later this expectation was reduced to 3 million) is at this moment, post-pandemic, uncertain if it will cover its operating expenses, as tourism in NYC has collapsed!!… ALL persons involved in the project, ALL OF THEM, are literally demolished in so many ways and face personal and other disasters.   Am I wrong to imagine that there is some divine intervention here?  Let’s take the list one by one starting from the top:

Patriarch Bartholomew: A universally disliked and failed Patriarch, known for his arrogance, his contrarian personality, and his deep indulgence for money, the last few years got involved in geopolitical games in Ukraine that resulted in violence among Ukrainian Orthodox.  Even worse, his actions caused the Schism in World Orthodoxy. There were plans to have his “icon” painted in the lobby area (“Narthex”) of Saint Nicholas Church!! We are hoping that these plans have been abandoned. There is nothing more egregiously against the symbolic humility of Saint Nicholas than such plans! What a shameless desecration!!

The only Patriarch who could represent St.Nicholas was Bartholomew’s predecessor, Patriarch Demetrios, truly a holy man. When he died, they rested his body for display and saw that his shoe soles had holes!! He did not want to burden the Church, not even with the cost of a new pair of shoes!… Pat. Bartholomew’s plans to visit America this fall are met with complete disgust from most of the faithful. It would be best to postpone them indefinitely…

Karloutsos: Involved in a series of legal investigations (first for GOA and the Shrine, then involving son, Mike), he is on a downhill slide to a shameful exit. Much depends on what kind of a “deal” Jerry Dimitriou will strike with the federal prosecutors.  Will J.Dimitriou use all the evidence he certainly has in his hands to avoid jail time? The next court date approaches fast, in January 2022. Karloutsos’ dream to “honorably” finish St.Nicholas during his term has dissipated already as he resigned!

Former AB Demetrios: His dream to finish St.Nicholas during his term also dissipated! Naturally so, because his support for the extravagant designs and the even more extravagant costs (by the known budget-buster architect Calatrava) was nothing but humble!!  Saint Nicholas himself would be happy to house his name and symbol in the tiniest of buildings where the tired, the poor, and the downtrodden would find temporary shelter… Would Saint Nicholas be happy with this “Shrine”? NO, of course NOT!! 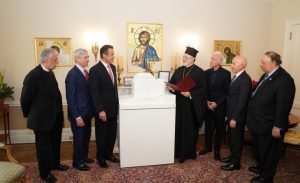 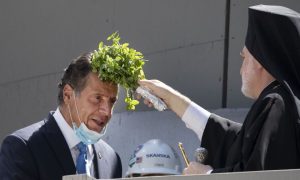 Governor Andrew Cuomo: If there was ever a person who embodied everything Saint Nicholas is symbolically against, that person had to be Gov.Cuomo. Arrogant as anyone, head of a corruption network – the worst NY State has ever seen, he put forth his ugly personality for all to see during the pandemic.  He displayed all his …unsurpassed incompetence in handling the virus spread. As a result, about 15,000 seniors found an untimely death in nursing homes in New York… Over fifteen women so far (we lost count!!) have accused him of sexual harassment! Yet, this colossal example of arrogance still pretends to be the governor of New York… Shameless to the extreme… Dennis Miehl, Karloutsos, Psaros, and others want to convince us that the Shrine would not have started without Cuomo’s support. Yet, simple facts and history show that Cuomo does nothing for anyone if it is not for his own personal benefit first.  He has suffered the curse of St.Nicholas harder than anyone else!!

George Papadakos and Jerry Dimitriou, financial heads for GOA and St.Nicholas.  The first has avoided jail time by being sentenced to pay a fine, and the second is awaiting trial. What deal is he going to strike to avoid jail time? Will he give Karloutsos?

There are certainly other names to add to this list, and their fate (as a result of their lack of faith and their actions against anything St.Nicholas symbolizes) will unfold before our eyes in the months ahead.  There is always time for repentance, though.  There is still time to make this Church a  Christian Church (no “Islamic” space in this Church- ever!!), a Greek Church (as it always was – the “safe harbor of Greek sailors”), and an American Church (not a globalist shrine!)… A piece of advice for all of them: Keep on the same shameless, faithless, selfish, and arrogant course, and the invisible hand of Saint Nicholas will shred your illusions to pieces… Change your course towards true humility and selflessness, towards faith, and you have a chance to redeem yourselves…