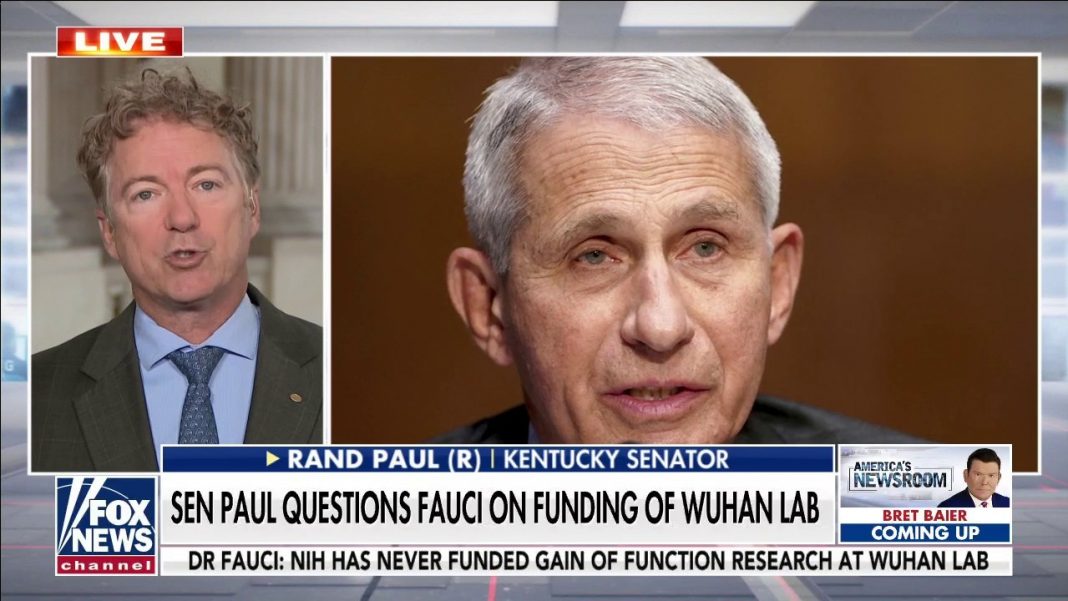 EDITOR’S NOTE (Nick Stamatakis): We had great news last week as the CDC FINALLY announced THE NEW GUIDANCE that masks are no longer necessary for those vaccinated… But how about those who already have had covid?  And if the two groups are above 60-70% haven’t we reached herd immunity and therefore the pandemic is over? Don’t forget that we have already vaccinated almost 50% of the population including the most vulnerable…

As all this important news comes out, suddenly Dr.Fauci is nowhere to be found. Did the Biden administration suddenly throw him out?  Is it maybe that Senator Rand Paul destroyed him proving that he is lying regarding the fact that the NIH (National Institutes of Health) under Fauci’s supervision sent to the Wuhan Labs in China a specific part of lab research (“gain of function”) prohibited in the US – and the generous money grant to do it!!  All lies are short-lived and Fauci’s lies are not an exception…

What happened to the almighty Dr. Fauci?

Last week he was on TV telling all of us that life wouldn’t get back to normal for at least another year or so, and this week he’s pretty much gone.

It was this past week when the “gain of function” dots were publicly connected to the good doctor.

This is nothing new for those of us on the right. Here on Revolver, we’ve covered Fauci’s gain of function research extensively…and the evidence against him is very damning.

A couple of months ago Fox News Host Steve Hilton blew the lid off of Fauci’s macabre obsession (and funding) of research involving the manipulation of highly contagious viruses.

Hilton laid the groundwork, but it was Senator Rand Paul who called out Fauci and his ghoulish research face to face during a Senate hearing.

Dr. Fauci tried to weasel out of it, and flat-out lied to Senator Paul, but Rand wouldn’t be deterred. Later, he proved Fauci was a liar in a tweet that went viral.

And if that wasn’t bad enough for the good doctor, Tucker later went after Fauci and called for an investigation into his past research:

And things just kept getting worse for Fauci. Later, Rand Paul appeared on Fox News saying, “Dr. Fauci could potentially be responsible for the coronavirus pandemic.”

It was heavy stuff — and it had an impact, because we’ve hardly seen or heard from Dr. Fauci since.

But even more notable, is that the CDC just updated their guidelines on mask-wearing and essentially ended the pandemic — a pandemic that Fauci has been the proud face of for over a year now — and when that announcement hit, he was nowhere to be found.

And his absence didn’t go unnoticed.

Yes indeed, you’d think that Fauci would have been front and center to discuss the CDC’s new guidelines the moment the news hit. The “Golden Boy” taking yet another victory lap. After all, Fauci never misses a moment in the spotlight. But he was not hitting the airwaves with the typical fanfare.

Fauci did crawl out of the woodwork late in the day to make one disastrous comment about kids and masks.

And speaking of the CDC’s new guidelines that lift the mask mandate and social distancing, this incredible new move comes on the heels of April’s ghastly jobs report, and more notably, the heavy scrutiny of Fauci’s gain of function research.

Newsmax reporter Emerald Robinson believes the canceling of Covid has to do with Dems’ collapsing poll numbers.

That could be true as well.

My best guess is that the Covid cancellation is a culmination of several things: April’s jobs report, Fauci’s scandal, and Dem poll numbers.

Otherwise, you’d have to believe all of this is just some crazy coincidence and a case of unbelievable timing.

But as we all know, there are no coincidences in politics.

So, chances of this CDC move being a piece in a much bigger puzzle are probably pretty darn good.

The biggest question now is – what will happen to Dr. Fauci? Did Tucker and Rand tag team Fauci to force the Dems to end the pandemic, or are they out for blood, and regrouping as we speak?

Time will tell, but I have a feeling there are more bombshells coming in Dr. Fauci’s future.