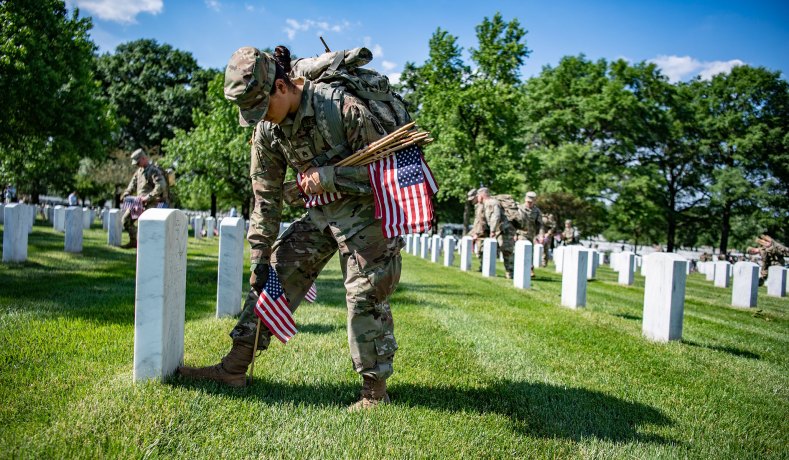 Google is not a good friend if you put in a search string about what you might want to watch or read to commemorate or even educate yourself or others about Memorial Day and what it represents. You get a lot of peripheral . . . um . . . rubbish.

Now it’s been a human instinct since Homer to use the setting of war and wartime sacrifice to make political points, settle scores, promote agendas, or just tell a tale loosely connected to the wartime event. Think here movies (some great ones!) such as Apocalypse Now, The Deer Hunter, M*A*S*H, Inglorious Bastards, GI Jane, or (on the other side of the cultural ledger) Top Gun. Or stirring books of war and sacrifice (some of our best fiction and non-fiction) such as A Bright Shining Lie, Hiroshima, Catch-22, The Naked and the Dead, For Whom the Bell Tolls, Leaves of Grass, or Cold Mountain.

But this weekend, instead of all that, I encourage Americans digging for the meaning of Memorial Day to read or watch something that brings one closer to the raw point of the commemoration in the first place — giving the ultimate sacrifice in war. To bring home the point of Memorial Day, for me the book or movie should be viscerally close to the combat or war experience — but without undue varnish, political angles, tortured analogies, or surrealism. Something that is less ornate and more real, in understanding the act and the action that led to the individual sacrifice we honor this weekend.

My suggestions are below. A few words of explanation. Memorial Day is an American commemoration, although many other countries have similar tributes (Remembrance Day in the U.K., Anzac Day in Australia, Armistice Day in France). So, save The Bridge Over the River Kwai, Das Boot, or All Quiet on The Western Front for another day perhaps. My list is from the American wars.

Overall, I prize those histories, memoirs, movies, and novels that capture the unique physical, psychological, and communal nature of combat, war, and sacrifice, but do so in the larger setting of the cause, the purpose, and the mission — presented without cynicism and despair. At the same time, they expose us to the full range of emotion elicited by war and sacrifice; from triumph, heroism, and unparalleled comradery to futility, angst, and horror.

My short list of suggestions for this weekend is below, but to give one example I would point to author Rick Atkinson’s lyrical histories of World War II (The Liberation Trilogy) or his Revolution Trilogy, currently being published and written. An Army brat and former reporter whom I first met when he came out to report on our tank battles in Desert Storm, he has mastered the art of weaving the grit and visceral detail of the individual combatant story into the bigger picture, while doing agenda-less justice to both. He has also managed to capture an important facet of war and sacrifice — the randomness and caprice of death and war — but without indulging in the idea it might be senseless because of folly, incompetence, or cruel chance.

Atkinson captures this in a way that allows us to appreciate the real nature of the heroism we salute this weekend, which is the heroism of surrendering oneself to the cause, the effort, the machine in some cases — and with no guarantee about how it could end, including in inexcusable mishap and disaster.

So, we commemorate not only the Boys of Pointe du Hoc but also the highly trained Ranger platoon who confidently leaped over the side of their grounded landing craft in the invasion of Sicily into an unknown runnel and promptly drowned. We recognize as heroes not just the Band of Brothers who made it from Normandy to the Eagle’s Nest but also their assistant division commander in the 101st Airborne who after three years of readying his division for combat unwisely sat in his jeep in the belly of a Waco Glider on D-Day and snapped his neck on the landing. We think of the nurses, doctors, and bed-ridden patients randomly killed by stray bombs at Anzio. All of these and so many others throughout American wars died cruelly in unheroic circumstances in a way, but as part of the most heroic and sacrificial act of mankind — surrendering oneself to the greater cause or group and without limit. This we commemorate this weekend.

I love the picnics and the pool openings too, nothing wrong with that. But here is a short list of some suggestions for Memorial Day if you take a chance to read, watch, reflect, discuss, remember, and pray. Some of the books are available on Kindle Unlimited or online, so even a chapter or two snatched off the Internet is a nice tribute to the day. Some wars provide rich literature or movies, others less so. I made no attempt to balance the list in any way but rather to range across various episodes of sacrifice and honor.

John Hillen is a decorated combat veteran and author of numerous books and articles on military affairs. He was the military adviser to the Call of Duty video-game series.