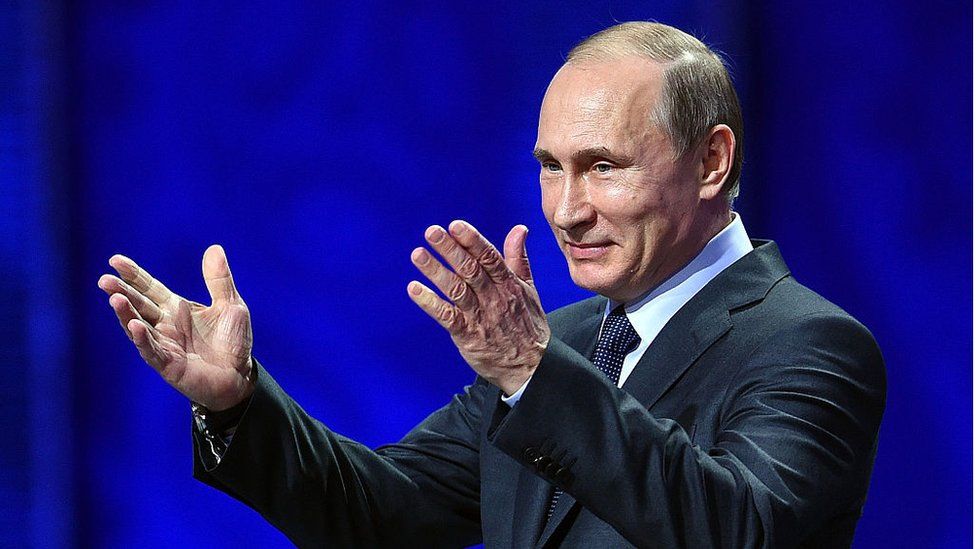 EDITOR’S NOTE (Nick Stamatakis): You know you live in an authoritarian state when Vladimir Putin teaches you democracy saying that “it was wrong for the US to criticize crackdowns on anti-government protests overseas while prosecuting Americans with “political demands”.  And of course, Putin is basically correct.  When the US government illegally keeps in jail for months and months hundreds of people most of who did nothing more than enter peacefully the “People’s house”, the Capitol, to protest, then the US Government has absolutely no right at all to protest for “anti-democratic crackdowns” in Russia, Belarus and elsewhere… Congrats to the Deep State! You just won the “Authrotarianism Award” from Ptutin!!! How much lower can you go?…

Meanwhile, Biden is getting ready for the “summit” with Putin, having already conceded the Nordstream 2 pipeline, meaning untold billions of $$ for Russia and Germany and having shut down 2-3 major US oil and gas production projects, leading the price of oil and gas 50% higher… Another bonus for the Russians who have now solved major financial issues and are ready to expand their military power even more… Amazing how things change in just 120 days…

Russian President Vladimir Putin has accused the US of double standards for its treatment of the Capitol rioters.

He said it was wrong for the US to criticise crackdowns on anti-government protests overseas, while prosecuting Americans with “political demands”.

Speaking at a business forum in St Petersburg, Mr Putin set expectations low for his summit with US President Joe Biden in Geneva, Switzerland.

He said he expected no breakthroughs when the two meet on 16 June.

He also denied suggestions that recent cyber-attacks on US companies had originated in Russia, and rejected claims that Moscow had meddled in American elections.

What did Putin mean by ‘double standards’?

Mr Putin reserved some of his most stinging criticism for US condemnation of a crackdown on anti-government protests by Moscow’s regional ally, Belarus. He hit back by suggesting the US Capitol rioters were being treated unfairly.

“They weren’t just a crowd of robbers and rioters,” Mr Putin said of the Trump supporters who stormed Congress on 6 January and temporarily suspended a session to certify Mr Biden as the winner of last November’s election. “Those people had come with political demands.”

When the forum moderator at the St Petersburg International Economic Forum suggested Mr Putin’s comments about the Capitol riot could see him banned from US social media platforms, the Russian leader drew applause from the audience by retorting: “I don’t give a damn about being blocked somewhere.”

Earlier this week, Russia’s Foreign Minister Sergei Lavrov said the Capitol rioters were being “persecuted” by the US government.

Some 500 suspects have been arrested for the riot, most of them charged with entering or remaining in a restricted building or grounds. Many have been released pending trial, but some are being held in solitary confinement.

A member of Mr Biden’s own Democratic party, Senator Elizabeth Warren, has said some of the defendants were being subjected to “cruel” treatment.

Opposition protests across Russia earlier this year were suppressed with crackdowns. Riot police were seen beating and dragging protesters away, while thousands of people were detained.

The Russian leader told business leaders that protesters in Europe have faced an even tougher police response, with some shot in the eye by what he mockingly called “democratic rubber bullets”.

It is not clear what he was referring to, but a number of French demonstrators were blinded by rubber bullets fired by police during the so-called yellow vest rallies that began in late 2018.

What did Putin say about his summit with Biden?

The Russian leader’s comments come ahead of his first meeting on 16 June with President Biden since the latter’s election.

Mr Putin said he expected “no breakthroughs” in the meeting to improve the “extremely low level” of relations between the two nations.

In March, Moscow recalled its ambassador to Washington after Mr Biden said Russia would “pay a price” for interfering in the 2020 US election, which the Kremlin denies.

“We don’t have any issues with the US, but it has an issue with us,” the Russian leader said on Friday in a separate interview with the state-backed Channel One TV station.

He also accused the US of trying to stifle Russia’s economy and influence its domestic politics.

“It wants to contain our development and publicly talks about it,” Mr Putin said.

But he suggested the summit could focus on areas of mutual interest, such as fighting climate change, the coronavirus pandemic and terrorism.

Despite the tough words, the Russian leader praised Mr Biden as “a very experienced statesman who has been involved in politics for his entire life”.

What else did Putin deny?

Mr Putin rejected claims that Russian hackers could have been involved in cyber-attacks on a US pipeline last month and meat-processing plants in the past week.

“I heard something about the meat plant,” he said. “It’s sheer nonsense. We all understand it’s just ridiculous.”

He said the accusations probably came from those who wish to “provoke new conflicts before our meeting with Biden”.

Mr Putin also denied that Russia’s secret service had played any role in the diversion of a plane to Minsk, on the orders of Belarusian leader Alexander Lukashenko, last month.

In a tearful appearance on state TV this week, Mr Protasevich praised President Alexander Lukashenko and admitted attempting to topple him – a confession his family says was coerced. Human rights groups and campaigners have also said he was tortured.