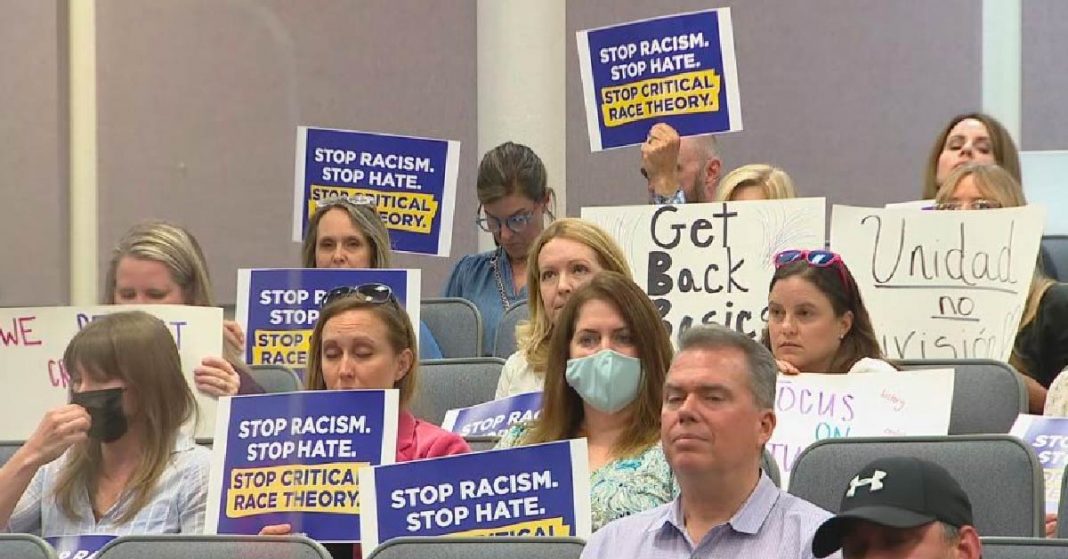 EDITOR’S NOTE (Nick Stamatakis): We have said many times that the Left every 40 or so years revives the delusion that their ideas have practical application in society… With the exception of the moderate “social democratic” policies applied mostly in post-war Europe their ideas have failed miserably everywhere they were applied.  Today in America their extremist actions put them against the very foundations of society… As you will see below, they managed to make their supposed supporters, suburban moms, rise against them, as they see their children not simply affected but become suicidal… And how could they avoid becoming suicidal when the BLMs and the Extremists of the Left make them confused about their family, their own mother and father, and above all their own gender identity!! These moms need some help from those who are supposed to be the greatest defenders of family, the Christian churches.  AB Elpidophoros are you listening?

The one thing you don’t want to do is mess with a mother and her children.

There’s something that happens inside a woman when she senses that her children are in danger. It’s hard to explain how this type of protective nature works, but it’s very primal, instinctual, and powerful.

And that’s precisely what’s happening right now to scores of mothers across the country, as they watch in horror as their children’s educations are poisoned by an anti-American, anti-white, communist curriculum called “Critical Race Theory.”

Critical Race Theory is a theoretical framework that is rooted in Marxism. It imagines individuals as either oppressed or the oppressor based solely on the color of their skin.

CRT claims that If you’re black, you’re automatically an oppressed person and if you’re white you’re a natural-born oppressor.

When it comes to Critical Race Theory there are no gray areas — it’s black and white — pun intended.

CRT is a toxic anti-white communist ideology that schools are packaging and pumping into the impressionable minds of our nation’s children.

It’s a lethal concoction designed to create a Democrat voting base from cradle to grave and it’s packaged to parents as “compassionate education.”

The reality is that CRT is creating a generation of radicalized political zombies.

And this is why American mothers are mad as hell and fighting back — and thankfully, this army of pissed-off Mama bears are winning the war against this demonic left-wing ideology that’s being used as a weapon of mass destruction against their children.

And it’s not just white moms or conservative moms who are fighting this demonic mind-control — it’s mothers from all walks of life, races, religion, and political backgrounds… and that’s what makes this movement so incredibly powerful.

Fighting Critical Race Theory could be the one thing that bridges the gap and unites this county. That’s how evil and dangerous it is.

A perfect example of that widespread effort is Keisha King, a black mom from Florida who blasted CRT as “racist” during a school board meeting.

Ms. King argued that CRT is racist because it not only divides the nation into two groups: oppressed and oppressor, but she believes CRT also seeks to further victimize blacks while demonizing whites.

Another black Virginia mom lashed out at the school board, calling CRT “racist” and “abusive.”

Another brave mom who survived MAO’s China, recently tore into a Virginia school board, comparing the left’s radical agenda to Communist China.

This mom from Carmel, New York stood before her child’s hostile school board and fought back against CRT in a video clip that went mega-viral.

As a matter of fact, the moms are so fired up that Fox News produced an entire segment highlighting an array of moms who were giving holy hell to their school boards, demanding CRT be removed.

And it’s not just inside the school board meetings that moms are fighting back, there are protests popping up all across the nation of parents fighting against Critical Race Theory.

The list of moms fighting CRT goes on and on – we’d be here all week if I posted the mountain of videos that are out there of these brave women standing up for their kids and their families.

It’s clear, by the massive outrage and outpouring that we’re witnessing, that this is the start of a major backlash against the left’s radical agenda.

And this all-important battle for the souls of our children is being waged by a fired-up army of angry moms who are ready to do whatever it takes to save their kids from a progressive future filled with hate and hopelessness.

I don’t think the left realizes the hornet’s nest that they’ve just kicked over… but they’re about to find out, and I can guarantee you this — the American Moms will win this war, hands down.

If you’re an angry Mama bear, get on down to your local school board meeting and join in on the fun. Or, you could even run for the school board and help put these leftist loons out to pasture once and for all.