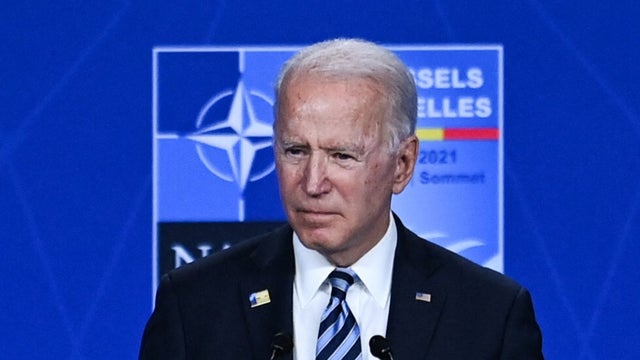 EDITOR’S NOTE (Nick Stamatakis): I was looking at the title of this piece of news for many seconds in disbelief… Then I read the text and could not stop laughing… Joe Biden, whose son Hunter, was part of the corruption problem in Ukraine, brought up corruption as a prerequisite for admitting Ukraine to NATO…  Well, I have a suggestion for President Zelensky: Go back to Kyiv and find someone you can trust (if there is any) in your intelligence services and tell them to pull out the Hunter Biden and Burisma file… Then make it public for all the world to see what corruption in Ukraine really means…
Mr. Zelensky, do you have ANYONE in your intelligence services who is not corrupted or otherwise blackmailed by the CIA?
But Joe Biden himself was part of the problem… Here is the infamous video for those who forgot…

President Biden on Monday said Ukraine must root out corruption before it can become a full member of the NATO alliance, something Ukrainian President Volodymyr Zelensky has pushed for.

“It depends on whether they meet the criteria. The fact is, they still have to clean up corruption. The fact is, they have to meet other criteria to get into the action plan. And so school’s out on that question. It remains to be seen,” Biden said at a press conference at the NATO summit.

“In the meantime, we will do all that we can to put Ukraine in the position to be able to continue to resist Russian physical aggression,” he continued. “And it will not just depend on me, whether or not we conclude that Ukraine can become part of NATO. It will depend on the alliance and how they vote.”

Zelensky told news outlets earlier Monday he was looking for a clear “yes” or “no” from Biden on whether Ukraine would be admitted as a full member of NATO. The issue has become increasingly urgent as Russia amasses troops along the Ukrainian border and tensions escalate between the two nations. Russia illegally annexed Crimea from Ukraine in 2014.

Given Russia technically has invaded Ukraine, other NATO nations would be compelled to defend Ukraine should it join NATO under Article 5 of the organization’s treaty, which stipulates that member nations consider an attack on one ally an attack on all allies. Biden said that dynamic would not preclude Ukraine from being admitted as an alliance member.

Ukraine has had a long history of issues with corruption, which Zelensky has pledged to clean up since taking office a few years ago. Former President Trump repeatedly claimed he was concerned about corruption in Ukraine when he was impeached for pushing for the country to investigate President Biden and his son Hunter Biden in 2019.

The president spoke to Zelensky over the phone before leaving for Europe last week. Ukraine is likely to be at the forefront of Biden’s meeting on Wednesday with Russian President Vladimir Putin.

“I shared with our allies what I’ll convey to President Putin: that I’m not looking for conflict with Russia, but that we will respond if Russia continues its harmful activities and that we will not fail to defend the trans-Atlantic alliance or stand up for democratic values,” Biden said at Monday’s press conference.