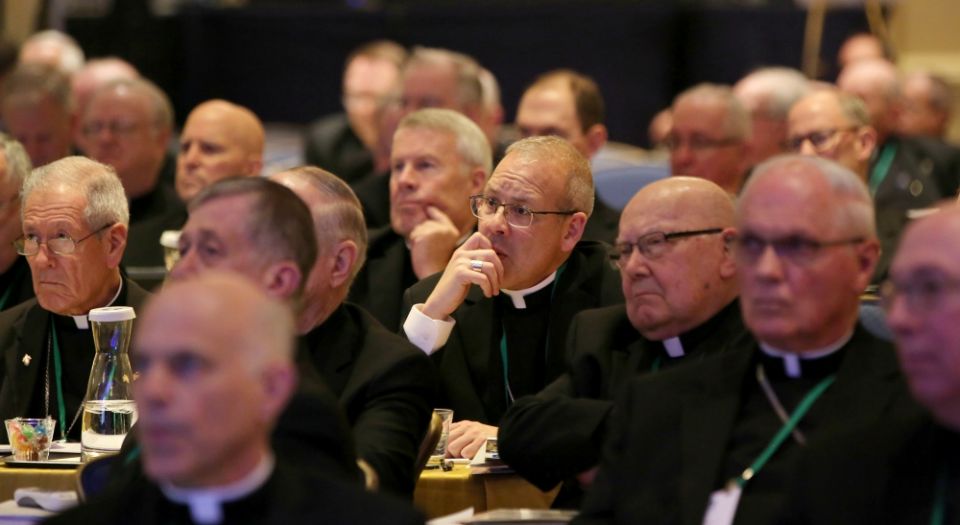 EDITOR’S NOTE: At a time when the Constantinople Patriarchate is mired in losing geopolitical games and drowning in a sea of arrogance while GOA is absorbed in fundraising and in “woke progressivism” the Catholic Bishops of America are tuned to their faith and are getting ready to prohibit Biden – and all abortion supporters – from taking communion…

The U.S. Conference of Catholic Bishops (USCCB) has voted to proceed with drafting a formal statement on the meaning of communion, which will include whether President Biden and other politicians should be denied the rite based on their stance on abortion.

The action item for the committee on doctrine to start a teaching document on the Holy Eucharist passed 168-55, with six bishops abstaining from the vote, the USCCB announced Friday.

The document will be up for debate, subject to amendments and voted on at the group’s next meeting in November.

When asked at a press conference on Thursday following the vote if Biden, who is only the second Catholic president, should be able to receive communion, Bishop Kevin Rhoades of Fort Wayne-South Bend, said, “I can’t answer that question.”

“We will be looking at that whole issue of eucharistic consistency. … When you look at canon law, that is a decision of his bishop,” he added.

Church law doesn’t allow for national policies, so even if, following the release of the teaching document, the USCCB votes to deny pro-abortion rights politicians communion, it would need approval from the Vatican, which is highly unlikely.

The USCCB has been criticized for possibly rushing the vote and crafting of the teaching document in order to have it finished ahead of the 2022 election.

“I don’t think it’s being rushed, I think this is kind of a typical length of time for a pastoral statement,” Rhoades said. “It never really crossed my mind the politics of it, as far as the timing.”

Pope Francis this week cautioned American bishops against denying communion to politicians and warned that communion can’t be used as a political weapon. The group moved ahead with their debate this week, despite the pope’s warning.

The Vatican also advised the USCCB to preserve unity when discussing abortion issues and that it should not lead to divisions.

Bishop Michael Burbidge of Arlington, Va., said at the press conference on Thursday that the bishops, during the debate over communion, uphold the pope’s desire to be united.

We were united “even though we have different ideas, different approaches to the subject,” he said.

The Catholic bishops group in the U.S. is headed by José Gomez, the archbishop of Los Angeles. Gomez issued a statement on Inauguration Day to congratulate Biden, as well as criticize his stance on abortion.

Gomez is more conservative than the two leaders of the church with whom Biden interacts and from whom he receives communion the most: Cardinal Wilton Gregory of Washington, D.C., and retiring Bishop W. Francis Malooly of Wilmington, Del.

Both have said Biden can receive communion in their jurisdictions. Wilmington’s incoming bishop, Monsignor William Koenig, has not taken a public stance.