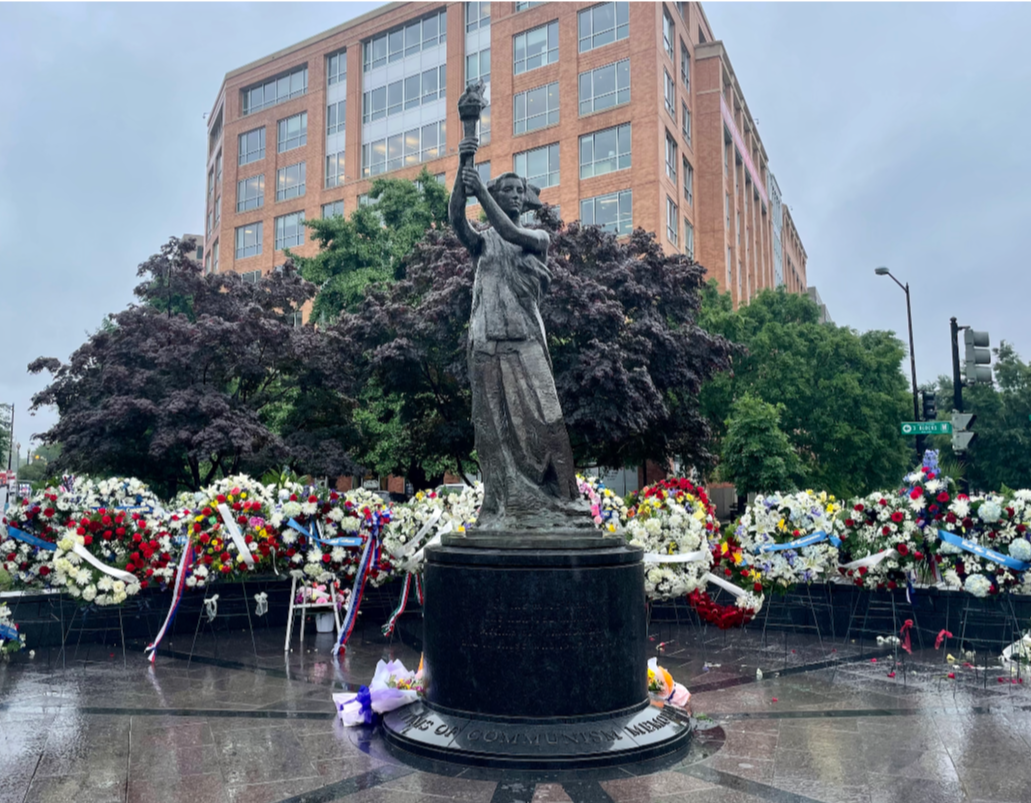 The Victims of Communism Memorial Foundation started the tradition to honor victims of Communism. It seeks to educate others on the evils of Marxist Communist ideology. Communism led to the deaths of 100 million people worldwide from Russia, Greece, Cuba, China, Ethiopia, etc. 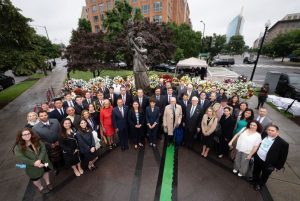 The Victims of Communism Memorial Foundation (VOC) is an educational, research, and human rights nonprofit organization devoted to commemorating the more than 100 million victims of communism around the world and to pursue the freedom of those still living under totalitarian regimes.

BELOW A VIDEO – PART OF THE EVENT…

================================================
For the last 14 years, not a single Greek Embassy official has shown up. Why is this bad for Greece? Outside Greek-American circles, Greece is viewed as a hardcore Marxist nation with active Communist/far-left anarchy groups.The Foundation was authorized in 1993 by a unanimous Act of Congress signed as Public Law 103-199 by President William J. Clinton on December 17, 1993. On June 12, 2007, President George W. Bush dedicated the Victims of Communism Memorial statue in Washington, D.C. They give the Truman-Reagan award to a specific person who contributed to fighting Communism.

In 2017, the Estonian government led a conference on Communist crimes. Estonia invited Greece. Yet, Greece refused to go. Why? In 2017, Ex-Greek Justice Minister Stavros Kontonis’ refusal to attend a conference on Communist crimes. For his criticism of the event, it sent off a strong rebuke by the Estonian government. Kontonis was a member of the Greek Communist Party. The Greek Communist left (PASOK, KKE, and SYRIZA) does not represent GREECE or the Greek diaspora!

It’s odd how the same Greek Communists have fat bank accounts, BMWs, and villas in Greece while falsely espousing the old Soviet Union-themed rhetoric of the 1940s.

Whoever wrote Greek history of the 1940s is wrong about the Greek Civil War. It was a Communist insurgency from 1941-1949 supported by outside Communist forces. Who supplied weapons to ELAM-ELAS? Yugoslav Communist Dictator Joseph Tito gave weapons. The majority of the Greeks did not support the Communist Insurgents. Yes, there were Greeks who joined ELAM-ELAS only to find out they were killing innocent Greek brothers and sisters for no reason. The Greek Communists murdered over 100,000 Greeks if you include women, men, children, priests, the elderly, and patriotic Greek soldiers. The Greek Communists looted and stole from hardworking Greek families. Bulgarians and Skopians Slavs were part of ELAM-ELAS. The Communists created the fake Skopia nation in 1944 that stole the Greek history and identity of Greek Macedonia. Communist propaganda flourishes in Skopje, FYROM. ELAM-ELAS burned a lot of Greek homes. The Greek Communists kidnapped 30,000 Greek children and sent them into the Communist nations of Bulgaria, Yugoslavia, Hungary, Romania, etc. Over a million Greeks were displaced from their homes due to Communist aggression, crimes, and battles with the Greek Army. I’m sure they repented their sins in later life like many ex-Greek Communists. Many Greek Communists found how difficult life was in the Soviet Union and went back to FREE MARKET CAPITALISTIC SOCIETY. The Greek Communists prolonged Greek misery till 1949.

I had 11 relatives murdered by Greek Communists in 1944. Ten of them were murdered at the Meligalas pigada (well). There is a large memorial with 1500 graves and the names of Greeks murdered in Meligalas, Greece. Who talks about the murders committed by Greek Communists who wanted Greece to be like Communist North Korea? The Federation of Greek Communities in Russia erected a monument(2012) to remember the 38,000 Greeks rounded up and sent to their death at Siberian Gulag death labor camps by Soviet Communist leader Josef Tito in the 1930s. I recommend everyone read the Black Book of Communism by Stephane Courtois, Alexsander Solzhenitsyn’s Gulag Archipelago, etc. The Abducted Greek Children of the Communists/Paidomazoma by Dr. Niki Karavasilis is a must-read. Also, the book called Calvary of Meligalas by Tasos Antonopoulos tells it all about Meligalas. Antonopoulos was in Meligalas and witnessed it. He interviewed survivors. What about the Greeks of Northern Epirus under Communist Albanian oppression? I heard stories of how Communist Albanians took lands, shut down churches, and imprisoned/killed Greeks. Nicholas Gage’s book named Eleni inspired a movie made about how Communists killed his mother. 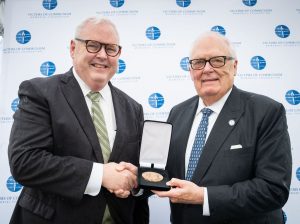 The Communists created fake nations and identities like Skopia (FYROM), Moldova, and Belorussia. Romanians are demanding the annexation of Moldova back to Romania. Belorussia is pure ethnic Russian lands that will unify with Mother Russia. Skopia/FYROM Slavs are Bulgarians who need to be annexed to Bulgaria. The Soviet Communists separated Armenian Karabakh and gave it to Azeri Turks. Communist Lenin supplied weapons to Ataturk in 1919-1923 to mass murder Greeks across Asia Minor.

It’s odd to find the elder Greek who boasts how he is Communist or was an ELAM-ELAS fighter/supporter while he owns a house, has a fat bank account, pension, business, and investments, and lives in a free society like the USA or Greece.

I thought good Greek Communists/Marxists/Socialists would have immigrated to China, Vietnam, Laos, Cuba, Venezuela, or North Korea? I still hear a few old-timer Marxist Greek immigrants talk greatly about Marxism. I question them if Marxism is great and Capitalism is bad, why did you immigrate to the USA? They shut their mouths.

Across Greece, there are many memorials of murdered Greek citizens of the 1940s. The Greek government until 1974 held official memorials. Once hardcore Greek Marxists like PASOK, SYRIZA, ND ruled Greece, there are no memorials. Citizens and priests still hold memorials throughout Greece to honor Greek victims of Communism.

I find it sick how young teenagers wear T-shirts with the hammer/Sickle or Che Guevara. Do they know the 100 million people killed by Communists in Russia, Greece, China, Cambodia, Cuba, Eastern Europe, Vietnam, etc.? This means how our academia in the USA and Greece is infiltrated by Communists/Marxists/Globalists. US and Greek Professors are brainwashing thousands of young adults that Karl Marx was the greatest man. They require students to read Marxist authors. I was brainwashed at the university, until I woke up and read books. I woke up to reality and truth.

Did you know Karl Marx gave birth to Socialism, Communism, Fascism, and Nazism? Who funded Karl Marx? Who funded the Communists and Nazis? The same Globalist Elites and Bankers who are trying to turn people into modern day slaves. The National Socialist Workers Party (NAZI) was Marxists. Mussolini was an Italian Socialist/Marxist. Vladimir Lenin adhered to Karl Marx and was funded with gold/free passage from the German industrial elites, Bankers in London/New York City and German Kaiser to destroy Russia.  The Jacob Schiff Wall Street Bankers funded with millions in the early 1910s to the Communists in Russia. Leon Trotsky was in New York City in 1917. Adolf Hitler hated Christianity and was an atheist who adhered to Karl Marx. Hitler was funded by the same banker elite who assisted the Communists. Hitler was no Christian and he took away German citizen’s right to own firearms. He confiscated German civilian arms. Why? The Globalist banker/corporate elites funded Marxist movements to destroy freedom and enslave free people.

Anthony C Sutton’s republished ‘The Wall Street Trilogy’ describes with State Department documents how Leon Trotsky was in New York City in 1917. Documents show how Wall Street funded Trotsky.  President Wilson gave Trotsky a US passport to travel to Russia to start the Bolshevik Revolution. The first volume describes Wall Street’s funding for the Bolshevik Revolution in 1917. Globalist elites funded Karl Marx. Sutton wrote these books in 1974, 1975, and 1976. The German Kaiser gave millions in gold to Lenin and free passage via Germany from Switzerland to Russia, in 1917.

In the February 3, 1949 issue of the New York Journal American Schiff’s grandson, John, was quoted by columnist Cholly Knickerbocker as saying that his grandfather had given about $20 million for the triumph of Communism in Russia.

Where are the Representatives of major Greek American organizations each year at the Victims of Communism Memorial Event in Washington DC?

Where is the Greek Ambassador to the US or his Deputies at the event each year?

We in the diaspora will remember and honor the Greek Victims of Communism.

Calvary of Meligalas by Tasos Antonopoulos

The Abducted Greek Children of the Communists/Paidomazoma by Dr. Niki Karavasilis

The Black Book of Communism by Stephane Courtois

The Gulag Archipelago by Aleksander Solzhenitsyn

Greek Victims of Communism Memorial in 2010

Romanians Calling for Unification of Moldovia (Bessarabia) to Romania