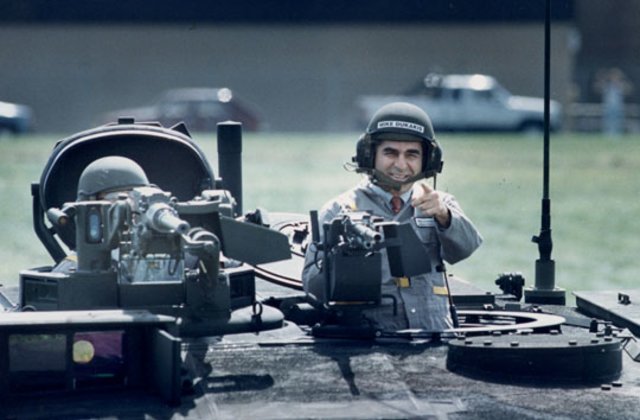 A generation ago, Michael Dukakis saw his chances of winning the presidency crushed after Republicans cast him as soft on crime.

Now he is warning his party not to make the same mistake.

The “defund the police” movement is “nuts,” Dukakis, the Democratic presidential nominee in 1988, told this column.

“I’m saying to myself, my God, what the hell is going on here?” Dukakis added during a 40-minute phone interview from his home in Brookline, Mass., late last week.

“On one hand, you have folks screaming and yelling about getting rid of policing, which makes no sense at all. And then on the other hand, you have some people totally misinterpreting what community policing is, just as we were really making huge progress,” he said.

The day before the interview, President Biden had laid out his plan to counter a nationwide rise in crime.

Biden’s efforts will prioritize police funding and disrupting the illicit circulation of firearms. The president is encouraging local authorities to use money from the $1.9 trillion COVID-19 relief bill passed in March to hire more law enforcement personnel.

Asked if he thinks Biden strikes the correct balance, Dukakis said: “I think he gets it and understands it. I’m not sure he and for that matter my party is articulating it very well.”

The issue, for Dukakis, is not about taking away or adding “gobs of new money” but about establishing trust between the police and the community.

The whole debate around policing, crime and justice has sharpened to a new intensity over the last year.

The murder of George Floyd in Minneapolis in May 2020 drew more support than ever before to the Black Lives Matter movement. Calls for sweeping police reform grew louder, with huge protests in many cities. Derek Chauvin, a police officer at the time he murdered Floyd, was sentenced to 22 1/2 years in prison on Friday.

At roughly the same time as the protests over policing erupted, however, rates of violent crime began to rise alarmingly.

The trend has not abated, though there is furious disagreement about whether the main cause is the disruptive effect of the pandemic or a collapse in police morale.

In New York City, the murder rate rose about 45 percent in 2020. Homicides in the city have increased a further 13 percent so far this year. Similar patterns are being seen in other cities. Murder rates in Atlanta and Miami had risen about 50 percent and 30 percent, respectively, year-on-year as of May.

Crime rates are still way below the levels of the late 1980s and early 1990s, when the crack cocaine epidemic ravaged many cities.

Last year’s steep rise in murders in New York City, for example, saw 468 homicides in total. In 1990, when murder peaked in the metropolis, 2,605 people were killed.

But the current trajectory on crime is worrisome to experts and voters alike.

Adams, who favors increasing the number of police officers on the subway, easily bested progressive Maya Wiley, who proposed cutting the police budget by around $1 billion. Several polls in the run-up to the election showed voters rating combating crime as their top issue.

It’s not just a New York dynamic. A report on the 2020 election commissioned by three Democratic groups and released in May suggested that Republican attacks on the party as sympathetic to calls to defund the police had done damage. Those attacks contributed to disappointing congressional results even as Biden ousted former President Trump from the White House, the report found.

Asked about the idea that Democrats are vulnerable to being labeled soft on crime, Dukakis shot back: “Not if they are strong and effective advocates and practitioners of community policing. That’s the difference. It’s not who’s tough and who isn’t.”

When it comes to crime, Republicans “have no idea what they’re talking about, and they care less, to tell you the truth,” he added. “They’re tough on crime? What does that mean? The real question is, are you working closely and cooperatively and well with those communities?”

Some older Democrats will lament that Dukakis wasn’t willing or able to make those arguments with such force when he ran for president. He seems to agree.

Back in 1988, Dukakis came out of the Democratic National Convention leading his GOP opponent, then-Vice President George H.W. Bush, by 17 points. He went on to lose by roughly 7 points, carrying only 10 states plus the District of Columbia.

His defeat is largely attributed to scorching Republican attacks on him as a “card-carrying” liberal who was weak on law and order.

An outside group ran an infamous ad featuring Willie Horton, a Black man who had been convicted of murder. Horton was released on furlough under a program Dukakis supported and then committed a rape.

The sinister ad is now almost universally seen as racist. At the time, it was also politically effective.

Dukakis faltered badly in a televised debate with Bush, too. An opponent of the death penalty, he gave a dry and bloodless answer when asked if he would retain that position if his wife, Kitty, were to be raped and murdered.

The failure to better handle the issue of crime still rankles Dukakis.

“I badly muffed an opportunity to really turn it right on Bush,” he said. “I started that campaign, I was going to be a positive guy, not going to get into the attack campaigning and all that kind of stuff. And it was a mistake,” he said.

“I come from Greater Boston where the homicide rate is one-sixth of the homicide rate in Houston [Bush’s adopted home]. They have the death penalty and we don’t. Don’t you think I should have done something? Kinda used that? Well, shame on me — I didn’t. And we had a story to tell.”

Dukakis, razor-sharp even at 87, is still able to recall crime figures from years ago. He does so in the service of his argument that debates over policing are often too binary and simplistic.

The choices are not “softness” or “toughness” on crime, the three-term Massachusetts governor insists.

“You need active police presence, but led by police officers who are well-trained and who understand how you work effectively and constructively and appropriately with communities,” he says. “We were headed in that direction until all of this stuff, and here we are now.”

A number of times during the interview he complained about people defending stop-and-frisk tactics or advocating draconian responses to minor crimes. He argued this is wrongly seen as part of community policing. He sees it as exactly the opposite — an overreaction that engenders distrust.

Dukakis also speaks admiringly of “my friend” Bill Bratton, who served as police chief in Boston before going on to greater renown in New York and Los Angeles.

Bratton presided over declining crime rates throughout his career. His approach was rooted in making police departments more representative of the communities they serve, as well as taking a more academic and data-driven approach to crime.

Bratton was always difficult to pigeonhole politically, as was once again made clear in a recent interview with Maureen Dowd of The New York Times.

To Dowd, Bratton acknowledged that what befell George Floyd was “100 percent a murder” but he also condemned the leaders of Black Lives Matter as “a bunch of Marxists.”

In that same interview, Bratton said that, among police, “the morale has never been as low as it is right now in the 50 years I’ve been dealing with it.”

His friend Dukakis says he does his part to try to help turn that around.

“Personally, when I see cops these days, I talk to all of them: ‘You’re doing a great job, stay at it, community policing is the answer’ and so on and so forth,” Dukakis said.

“And, A, they appreciate it but, B, many more of us have to be connecting with our police officers in a way that makes sure we don’t wander off some place, instead of sticking with what was, by and large, achieving great success.”

The Memo is a reported column by Niall Stanage.