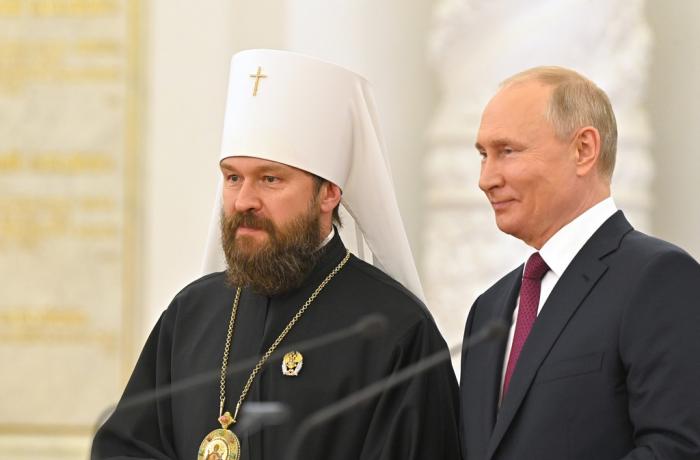 Yesterday there was a meeting between the pope and the delegation of the ecumenical patriarch of Constantinople. The Russian Orthodox have always contested the primacy of Bartholomew. Kremlin: The West wants “Orthodox schism” and to impose a doctrine according to which “even Jesus Christ was a bisexual”.
by Vladimir Rozanskij (Asianews.it)

Moscow (AsiaNews) – The traditional visit of the Constantinopolitan delegation to Rome was held yesterday On the occasion of the solemnity of Saints Peter and Paul, led by Metropolitan Emmanuel of France (Adamakis).

Pope Francis called for a new impetus in relations between Catholics and Orthodox, provoking the resentful reaction of the patriarchate of Moscow. Russian Metropolitan Ilarion (Alfeev), head of the Department for External Relations of the Russian Church, declared that “the Russian Orthodox Church will not accept the union of Orthodox and Catholics on the initiative of Patriarch Bartholomew of Constantinople, who claims to rise to the supreme master of the destinies of Orthodoxy “.

Ilarion intervened after an Orthodox new site published a Vatican News interview with the new Metropolitan of Italy Polikarp (Stavropoulos). The interview describes the gestures of the ecumenical patriarch Bartholomew and the Pope as “further progress towards full unity”, which it claims is already realized in the conscience of the faithful.

The Russians have always contested the “primatial” authority of Constantinople over the rest of Orthodoxy, and recent years have seen this conflict escalate to the current condition of schism, due to the autocephaly of the Ukrainian Church, which is not recognized by Moscow.

Metropolitan Ilarion then spoke on the Rossija-24 television channel, also broadcast outside Russia, in the program he himself conceived “The Church and the world”. In it he reiterated that “the patriarch of Constantinople in recent times has decided that he has the right to take any decision independently, without the agreement of the other local Orthodox Churches and without resolving the many issues that remain open in the Catholic-Orthodox dialogue. He may even sign some papers to say that everything is fine, but for us they are of no value”.

In the last decade, the Russians have withdrawn from all Catholic-Orthodox dialogue commissions, precisely in controversy with “Constantinopolitan papism”, in the words of Ilarion, for which “they try to import the Catholic model of hierarchy into orthodoxy and administration “. The dialogue has stalled in recent years precisely on the question of the various forms of primacy in the history of the Church, a subject that the Russians do not even want to hear mentioned.

Russian Foreign Minister Sergej Lavrov has fuelled the controversy by accusing the whole West, especially the US, of supporting the “schism between the Orthodox” with various strategies, and of wanting to impose a doctrine that “even Jesus Christ was a bisexual”.  This is what is reported in an article by the authoritative newspaper Kommersant of June 28, in the section on “Russia and global politics”.

Without specific references, Lavrov asserts that in Western schools “there is an attempt to instil in children the belief that Jesus was bisexual, while the attempts of the few balanced politicians to protect children from aggressive LGBT propaganda collide with protests from enlightened Europe.” According to the head of Russian diplomacy, “an attack is underway on the foundations of all world religions, and on the genetic code of the great civilizations of our planet”.

In support of the minister’s statements, on 25 June the Russian Foreign Ministry underlined the joint declarations of the embassies of Australia, Canada, New Zealand, Iceland, Great Britain and the United States in favour of the “LGBT pride month”: a defence of human rights included in the United Nations Universal Declaration, which Russia now intends to challenge.