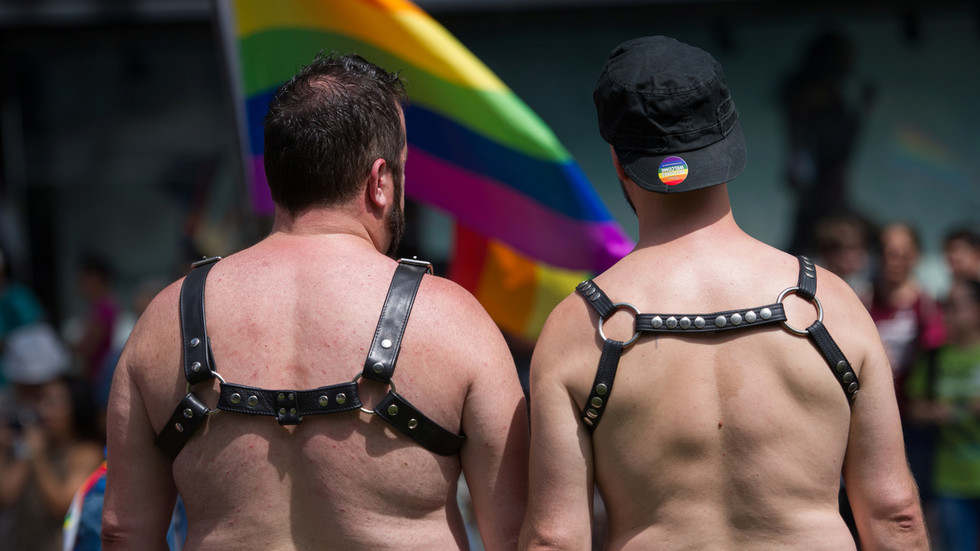 EDITOR’S NOTE (Nick Stamatakis): We shouldn’t expect any statements from the usually sensitive hierarchs of our Church, should we? Of course not… Why should they care to make such sensitive distinctions when it comes to the healthy development of the children? If they did, it would show that they care about the traditional concept of “family” – but they do not…

By Charlie Stone (RT.com) Charlie Stone is an author and journalist who has worked for the BBC, several national newspapers in the UK and international media.
Gay Pride has done a great deal of good to increase acceptance in society, but if they keep insisting on involving kids and ‘kink’ in their parades, they’re going to undo decades of progress. Believe me – I’m a parent.

Do as you please in the comfort of your own home. Dress as uncomfortably as may turn you on. Have sex with whomever you choose and do whatever comes to mind with each other, as long as you’re all adults and it’s with everyone’s consent. What’s it got to do with anyone else?

I’m a liberal guy – live and let live and all that. I honestly don’t need anyone else’s approval on that score. I know who I am. I don’t care about anyone else’s opinion anyway, and I never have. It’s a gift. And I truly do believe everyone should be free to be who they are – as long as they don’t hurt anyone, as long as they’re consenting ADULTS.

Yet there are forces in nature with which you should simply never mess, lines that you would be wise to never cross. And a parent’s protection of their child is one of them.

So, I’m just saying: if someone ever – ever – approached one of my little kids in a gimp suit and leather mask, if they gave off even the slightest whiff of sexual intent to any boy or girl, in fact, who was under the age of consent and I was a witness to this, they’d have to live with the consequences.

They would, I absolutely assure you, be picking their teeth out of their mouth the very next time they pulled the zip on that zipped mask. And it’s not a male, macho-bullshit thing. Oh no. If the mother of my kids – the parent who gave birth, I mean – got to this person first, they would most likely never wake up at all.

Writers such as Lauren Rowello from Philadelphia need to accept this as a simple fact. A reality of human nature. She wrote in the Washington Post about how she thinks ‘kink’ is a fundamental and vitally important factor in the world and… she wants her kids to absorb it, live within it. OK, fine. That’s your family, Lauren. I’m just saying don’t take the risk and expose mine to it.

Her tale about family trips to Pride parades kind of splutters to get to the poi and is way too long, but it’s worth a read nonetheless. And I quote: “When our children grew tired of marching, we plopped onto a nearby curb. Just as we got settled, our elementary-schooler pointed in the direction of oncoming floats, raising an eyebrow at a bare-chested man in dark sunglasses whose black suspenders clipped into a leather thong. The man paused to be spanked playfully by a partner with a flog. ‘What are they doing?’ my curious kid asked as our toddler cheered them on. The pair was the first of a few dozen kinksters who danced down the street, laughing together as they twirled their whips and batons, some leading companions by leashes. At the time, my children were too young to understand the nuance of the situation, but I told them the truth: that these folks were members of our community celebrating who they are and what they like to do.”

I challenge any RT reader to get to the very end of her article (I didn’t). It’s not an easy read. It throbs and grinds with self-righteousness and utter self-obsession. But anyway – righto, Lauren, righto. I hope it all works out well for you and your family – your offspring, in particular. But, really – honestly, Lauren – is it really all that important? Is a kink lifestyle the single most important factor in the trajectory of yourself and your loved ones? The dominant factor in your day, EVERY day? Really? Why?

There’s a line that’s often trotted out about two gay men or two lesbians being free to snog openly on the street or in a bar or whatever in full public view. And that’s fair enough. But most people don’t want to see ANY couple eating each other’s faces and groping each other’s private parts on a park bench.

Gay, straight or anything in between, my reaction is to shout, “Get a f***ing room!” Go home. Go! Get it on. Do what you feel, just don’t do it in my face. For the simple reason that I don’t want to do the same thing in front of you. I don’t feel the need for you or anyone else to see me canoodling. The only person who matters is the woman I’m canoodling with. It’s between her and me. Nobody else. It’s a private thing.

Vast, huge, monumental strides have been made in the name of Gay Pride. And I reckon most people would agree this is a very good thing. But it could all be blown to pieces by people with no brains and no political nous coupled with an utter and all-pervasive obsession with sex and sexuality to the detriment of EVERYTHING else – people like Lauren Rowello from Philly.

ALSO ON RT.COMSpreading ‘human rights’ at the tip of a bayonet: the LGBT agenda has now become a tool in Western foreign policy across the globe

Lauren and family, of course, are way out there on the extremes of all this. On the edges. But they could tip the world back to an awful past, like in the 1970s or whatever, when those people on marches these days really would have to hide – or risk assault.

Taking Gay Pride and smashing people about the face with it is really dumb, Lauren. Making your average Joe and Jane Blow afraid is plain old moronic. You speak for no one but yourself.