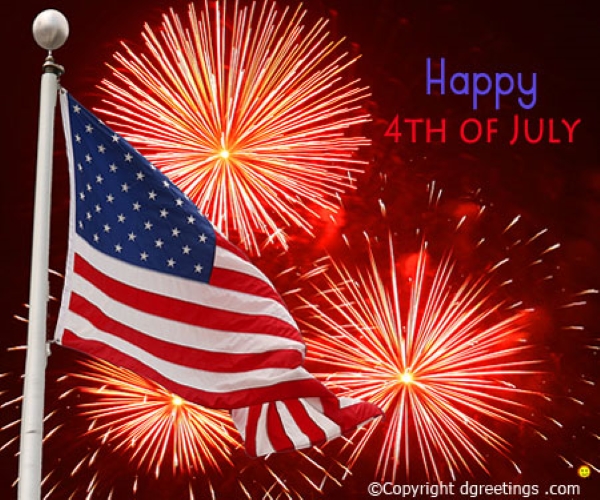 EDITOR’S NOTE (Nick Stamatakis): We cannot imagine a better tribute to America’s Independence Day than honoring those who served this country at war… Among them a beloved priest of our community, Father Vassilios Bassakyros, who celebrated yesterday, July 2nd,  the anniversary of his return from Vietnam in 1967. At the airport, his mother waited accompanied by the TWA steward… (Fr. Vassilios on the left) 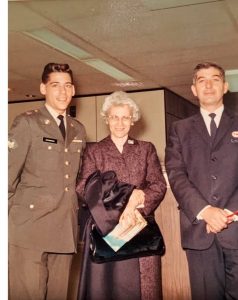 Father Vassilios served in a combat engineers’ battalion, one of the toughest positions a soldier could have in Vietnam. These heroic engineers were the ones who would preceed any other army unit to clean a field of mines – just to state one of their many duties… A list of those duties is presented here by Lieutenant Colonel Ed Wenners – real documentation of the heroism of all men of the Engineers’ Battalion, including Fr. Vassilios… 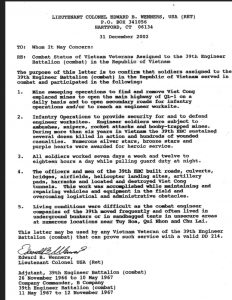 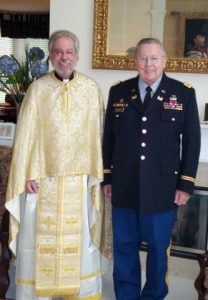 VIETNAM AS SEEN BY E. BASSAKYROS /AKA/ “BILLY THE GREEK”

577TH ENGINEER BATTALION area at Ft. Benning. I took them an hour before our departure from the Ft. heading for the ship at Oakland Ca. Once we arrived at Oakland we were told that we would be going down to San Diego, to pick up some 500 Marines. After that we headed across the muddy water for Okinawa to refuel and pick up provisions. The ships air conditioner went on the fritz sometime after we left San Diego. So the ride over was hot and sticky. Our first stop in country was Da Nang, where the Marines debarked, thank God! One of the Marines I went to school with in Brooklyn, and he is the one that the arrow is pointing at in the photo. After that we went to sailed to Quin Hhon. Our last stop was Cam Ranh Bay where the LST’s were waiting for us to take us ashore. It reminded me of the WW II movies I saw when the soldiers climbed down rope ladders to get into the LST’s. We did the same thing, but without any weapons. This made all of us a little worried about what was awaiting us on shore. The gunners on the LST’s were firing rounds over our heads, so we thought that we were going to see action on the first day. However, when the LST finally hit the beach and the door was lowered and we saw school buses waiting for us to take us to our new Bn. and company area. 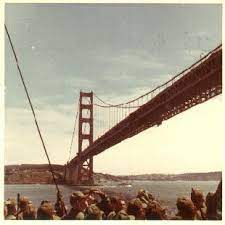 We started first pouring forms for the many buildings needed for our Bn. We worked day and night laying the forms out with wood and then pouring the 3-2-1 mix of concrete into the forms. After that we built wood frame structures on the platforms. The first building we built was a shower, I wonder why Lifto is standing in front of it in the photo, and the other guys in the photo are dividing the interior space by constructing walls. Lifto was one of the guys who was transfered with me to the 39th. a few weeks later. Also there was a company laundry tent with some washing machines in them. As you can see from the photo, we were on a sandy beach on a little back bay of Cam Rahn. I spent only a few weeks with “B” Co. of the 577th in country, and missed the guys very much, to my surprise the day I DEROSed, I meet some of my buddies at Saigon waiting to go home. Where we renewed our friendship and told stories of our different adventure during our tour around Vietnam. Their names are Kolesar, and Kamansky, AKA, Apeman, and Wolfman. I took the
photo on the way home on a Northwest Airlines airplane heading for Washington State. Some of the other names I remember from “B” Co. were, Higgins, and Lawson. My memory has lost a little accuracy, some I will not venture to add any others to the list. If the case should arise and I remember more I will send them to you, OK? Well, I hope that these facts and photos will be of service to you, and that maybe others will see them who were with the 577th on its maiden voyage across the muddy water the summer of 1966.
This is looking to the left from our Co. area at Cam Rahn Bay. 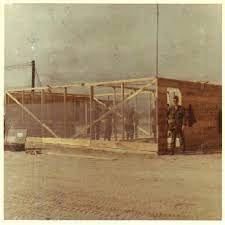 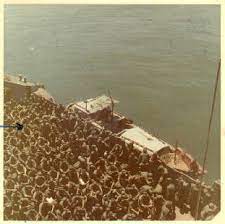 I BELIEVE THIS SHOWER IS THE SAME ONE THAT WAS LOCATED AT 18TH BDE. HQS IN 69
One of the first showers we constructed on a platform we poured a couple of days before. Lifto [AKA Hatman] is standing in from of the building at Cam Rahn Bay Base Camp.

LAUNDRY TENT {BEFORE MAID SERVICE} This tent houses the laundry in Cam Rahn Bay and our base camp of the 577th Bn. We gave it a real workout, especially when we were pouring the forms 24 hours a day.

Finally time to DEROS home, and this is a photo taken on the Northwest Airlines Airplane with some members of the 577th that I met up with at Saigon on July 1, 1967. I served with both of them at Ft. Benning and with the Company during the first few weeks at Cam Rahn Bay. Kolesar [AKA Apeman] is closest to the camera, and Kamansky [Wolfman] is sitting at the window. 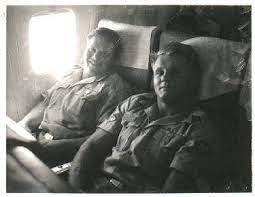 It was the longest flight I ever to by plane, but it was the happiest. Seeing them again was a great suprise, we talked all the way home about all that we had seen and been through the past year. I told them that Lifto was wounded and I guess sent to the states, because we never saw him again. I will never forget the 577th. and the guys who made the trip overseas with me. 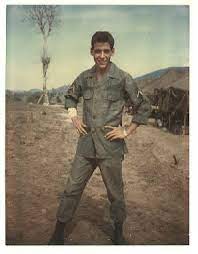 This is a photo of me[BILLY THE GREEK] at the Special Forces Camp A-221, at Cung Son,
after I was transfered to the 39th Combat Engineer Bn. sometime in January 67. 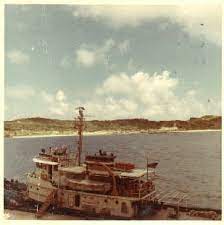 We went to Da Nang to off load the Marines that were with us during the trip over. During our trip they were the MP’s on board in charge of order over us. This was seen by us as war, and many times a Marine was hit in the head in one of the ladder ways by member of the Army with an entrenching tool. So when it came time to off load them in Da Nang it was a real relief, and a happy occasion for us. A guy I went to school with in Brooklyn I met on the ship and was a Marine. arrow on the left is pointing to him.

Our first stop in Vietnam was Da Nang harbor, where we throw concussion grenades over the side to keep the VC from trying to blow up the ship with the remaining troops. The trip took us about 35 days in total to reach Da Nang from the states. When we entered the China Sea we were met by a typhoon that threw the ship around like a tooth pick. Many of us became sea-sick, and the heads [bathrooms] were overflowing with upchuck. Water was everywhere below decks, but after about 5 days it passed and all was back again and smooth sailing.

Docking at Okinawa for refueling and supplies. We were not able to debark because they were afraid we would go AWOL. So all of us had to remain on the ship until we set sail for Vietnam. Sundown on the Pacific Ocean. A beautiful scene somewhere between California and Okinawa.

We passed many old ships at San Diego that were being repaired or mothballed on our way out to sea. Leaving San Diego harbor and the open sea with the 500 Marines aboard.BR> Underway and approaching the Golden Gate Bridge. Everyone was on the deck taking their last looks at this part of the world. 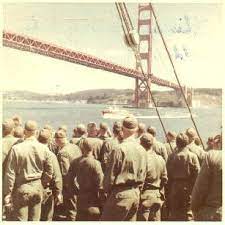