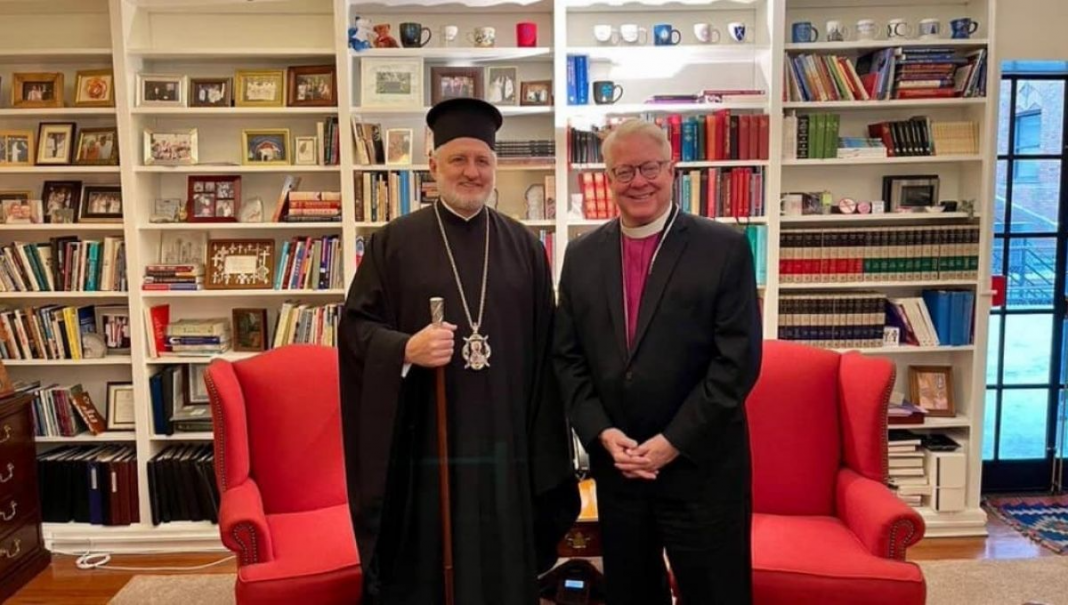 As if to add insult to injury, Abp. Elpidophoros returned on July 3 to St. Bartholomew’s Episcopal Church on Park Avenue. This is the same “St. Bart’s” where the archbishop and his entourage had served the Divine Liturgy to commemorate the thirtieth anniversary of Patriarch Bartholomew’s reign from Istanbul…err…Constantinople. At that occasion on June 11, the archbishop in his non-homily lavished obsequious praise upon his boss saying, “He is a living Apostle of love, peace and reconciliation”. Yeah, tell that to Metropolitan Onuphry and the faithful in the Ukrainian Orthodox Church, who have endured ecclesiastical schism, theft of church properties and sometimes even physical violence. That mayhem has been caused indirectly by Pat. Bartholomew’s meddling in Ukrainian politics. Auwe!, as the Hawaiians say. “No!”

This time, Abp. Elpidophoros was at St. Bart’s in a more personal capacity to visit with their rector, Bp. Dean E. Wolfe. The purple shirt you see is the indication of episcopal ordination. Wolfe used to be the bishop ordinary of the Episcopal Diocese of Kansas for the thirteen years from 2004 to 2017. Like many TEC dioceses around the country, it is a little liberal oasis in a conservative state. Bp. Wolfe cut a notch in his belt when “he officiated (at) the first authorized Episcopal same-sex marriage in the diocese.” (St. Bart’s website) Of course, there is no such thing. St. Bart’s is a large congregation fully a quarter the size of the whole rural Diocese of Kansas. Wolfe must feel quite at home at that megachurch, where they are actively queering midtown Manhattan.

Regarding the tete a tete, the archbishop said “Ecumenical dialogue and collaborations are vital witnesses to Christ’s teaching and ministry.” We all want unity amongst Christians, but true ecumenism will never compromise the Truth of the Faith in order to make nice with heretics. The stricter kind will seek the return of schismatics to the Orthodox Church. It almost sounds unAmerican to say that, but it’s the inconvenient truth. By revisiting St. Bart’s, the archbishop emphasized his desire to grow closer to the Episcopal Church despite the repugnance of TEC’s promotion of the LGBTQ+ whatever-in-hell-turns-you-on agenda. That is the impression that one is left with.

Certainly a seasoned politician like Abp. Elpidophoros knows well that repeat association with heretics like Bp. Wolfe telegraphs a tacit agreement with their teachings. That, in turn, implies an abandonment of the Orthodox teaching that stands in stark contrast to the heresy. God forbid. We cannot but conclude that the archbishop is sending the wrong message to his faithful followers. Please, we don’t need this, Your Eminence – not after the unprecedented destabilization caused by the events of the last year and a half. Not now.

This author is – used to be – a cradle Episcopalian and Anglican priest who felt the need to leave his beloved denomination because it had abandoned Christian morality. It was not without having first made sacrifices that I renounced my ordination and submitted to (re)baptism as a layman in the Orthodox Church. Imagine my disappointment to see our venerable archbishop flirting in his official capacity with the very Episcopalian heretics with whom I felt the need to part company. Auwe!