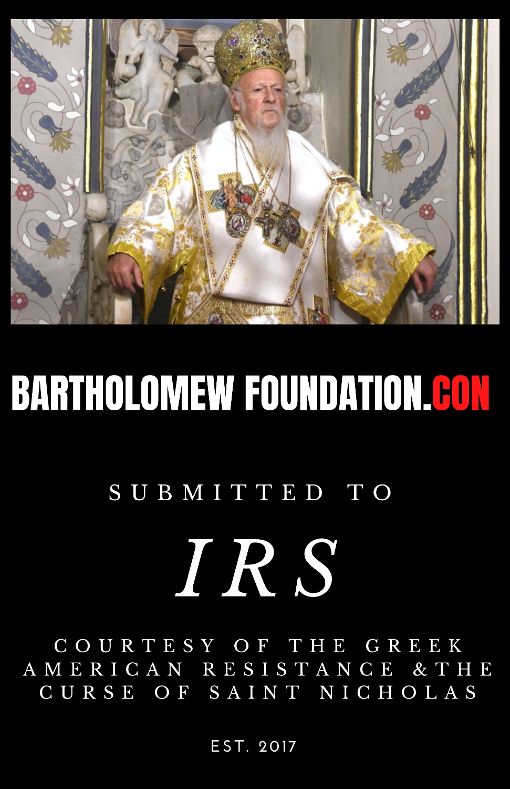 Desperate for money, both the Patriarchate and GOARCH have been opening foundation after foundation in the last few years.  We all were accustomed to “Leadership 100” and the “Archons” but suddenly, after AB Elpidophoros was enthroned, we were introduced to the “Senators of Hellenism” and recently to the “Patriarch Bartholomew Foundation”… What’s the rush? Are we to believe that “financial independence for the Patriarchate” is a true goal? We have seen enough corruption the last few decades to swallow such a monstrous lie…

We will examine the real reasons behind establishing the latest “Foundation” at the end of this post. But for now let us just state some facts:

As per the IRS database, the name of the entity with the Employer Identification Number 83-3599880 is St. Andrew Ecumenical Patriarchal Fund Incorporated
IRS link to Determination letter:
FinalLetter_83-3599880_STANDREWECUMENICALPATRIARCHALFUNDINCORPORATED_06092020_00.tif
Why does the IRS have a different name for the entity (St. Andrew Ecumenical Patriarchal Fund Incorporated) from New York State (Ecumenical Patriarch Bartholomew Foundation Inc.)? If they needed a D/B/A they should declare it. What is going on here?
The organization was founded on January 17, 2019 and the IRS Effective Date of Exemption is also January 17, 2019. Why hasn’t the foundation filed any tax return IRS Form 990 yet? 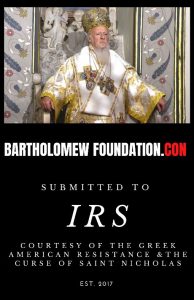 Meanwhile, they apply pressure to numerous parishes to become founding members contributing $100,000 over 10 years and they even had the National Philoptochos Society do the same –  no shame at all!! As if the Philoptochos had accomplished all the ministry goals and they had excess cash to throw on a new foundation… Also, similar pressure is applied on all Metropolises, but the strangest news came from Chicago where Met. Nathanael suddenly decided to contribute $100.000 out of his own pocket!! Are we to believe that the Metoplolitans do not depend on their parishes and the faithful for their income? Faithful and parishes in the Chicago area keep a watchful eye: he will be coming after you for even more annual “tax”…
All this is going on as GOARCH operates with NO charter and the talks about forming the new one have stagnated.
Then why all this rush with the new foundation? In my opinion, it has to do with the enormous legal pressures on GOARCH these days: 1) The ongoing federal investigation both in GOARCH and St. Nicholas Shrine. 2) The tremendous legal troubles of Karloutsos and his son Mike (aka “Fredo”). 3) The multiple sexual abuse lawsuits (we know of at least 13 of them but there likely more) to be settled.  The expenses to serve all those legal troubles are measured in many millions and so far this is the most plausible explanation for both the urgency and the “loose scope” of the new foundation… In other words, this is a huge legal slush fund…
July 13, 2021, n.stamatakis@aol.com   www.helleniscope.com