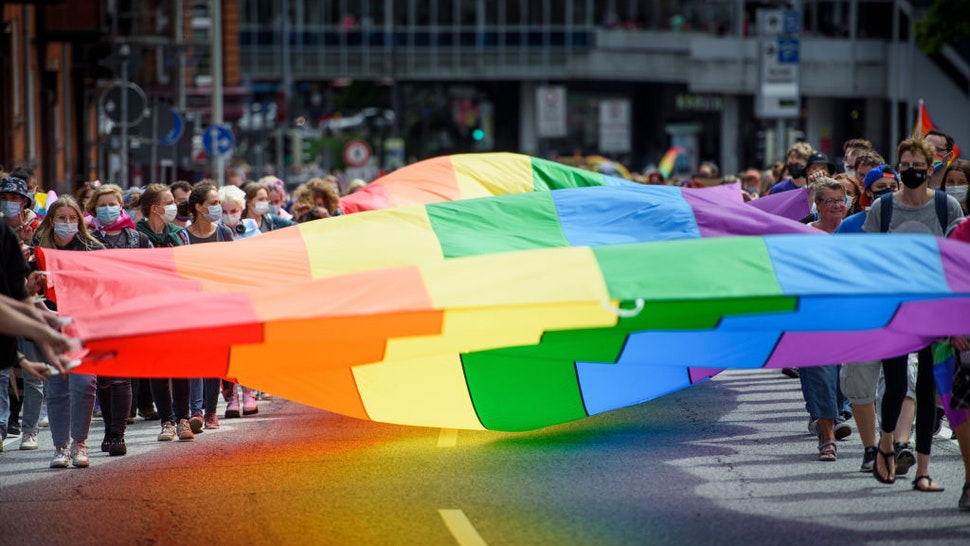 EDITOR’S NOTE (Nick Stamatakis): One more wake-up call for all of us!  All possible lines have been crossed by the Woke Left and their co-conspirators, the Teachers’ Unions and they are now engaging in pure unadulterated criminality… This is certainly a huge miscalculation on their part as they turn against them ALL parents regardless of their politics: YOU CANNOT INVOLVE SMALL KIDS IN SEXUAL ACTS -PERIOD… Soon you will be behind bars!!

Students in a Wisconsin school district have access to a slew of “sexually explicit” books via their school-provided computers, including content that dubs traditional views of marriage as “ignorant.”

Elmbrook School District offers students access to books and information via an online library called SORA. The SORA database — which can be accessed by students as young as eight years old — includes books such as “This Book is Gay,” by Juno Dawson, and “Queer,” by Kathy Belge and Marke Biesche.

“This Book is Gay” offers a play-by-play of how to use Grindr and other “sex apps.”

“The ‘God can help you’ people. These people try to convince you that God will help you become straight. They will try to ‘save you’ in this way. And they are big fans of reparative therapy,” the book reads. “The ‘hate the sin, love the sinner’ people. These people try to tell you that, even if you can’t help being gay, you should never act on it because gay sex is immoral and ungodly.”

Wendy Dorn, a parent activist in the district, told The Daily Wire that the district uses a content filter called “Securly” to weed out sexual content. According to Dorn, parents realized they did not receive reports via Securly that their students’ school Chromebooks had accessed “This Book is Gay” or “Queer.” (The Securly reports do not note what books are accessed.)

“What I have a problem with is that our school district’s curation of this sexually charged content in the online school library trespasses on a parent’s right to draw boundaries around the age, environment, context, and point of view from which this kind of sexual information is exposed, shared, described, interpreted, and understood,” Dorn said.

Parents are also concerned that the books do not align with the State of Wisconsin Sex Education Policy, which promises to teach towards abstinence. The policy promises to “stress the value of abstinence as the only reliable way to prevent pregnancy and sexually transmitted infections, and shall identify the skills necessary to remain abstinent” and present “abstinence from sexual activity as the preferred choice of behavior for unmarried pupils.”

Elmbrook School District did not respond to The Daily Wire’s request for comment.

Elmbrook School District has been scrutinized by parents for months after it announced that it was re-evaluating its social studies curriculum. Local activists demanded that the new curriculum include teaching children that “white feminism” failed racial minorities.

The school district resides in the largest Republican-leaning county in Wisconsin and has been a GOP suburban stronghold for years. The district has not supported a Democratic president since 1964. Yet, parents feel that their children are falling victim to the whims of left-wing educators and a small, but vocal group of activists.

Parents have pointed to examples such as a fifth-grade teacher claiming that the district was failing students by not including “racial and social injustice studies.”

The title of this article has been amended for clarity.

The Daily Wire is one of America’s fastest-growing conservative media companies and counter-cultural outlets for news, opinion, and entertainment. Get inside access to The Daily Wire by becoming a member.