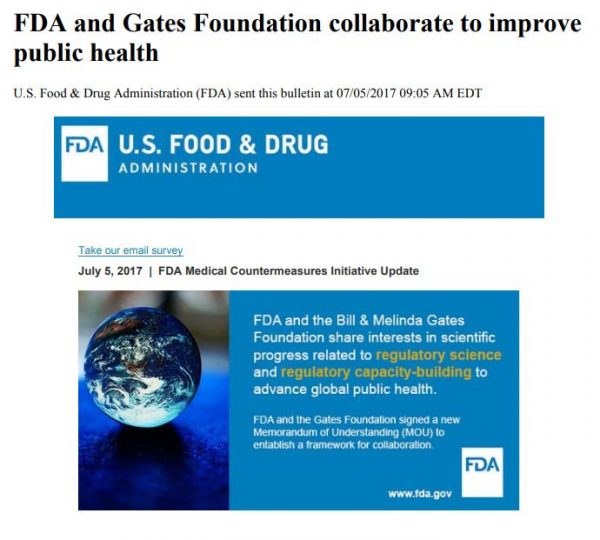 EDITOR’S NOTE (Nick Stamatakis): For quite a while it has been rumored that Bill Gates owns stock of Pfizer and BioNTech and recently investigative journalism revealed it (posted at the bottom).  Then it should come as no surprise that FDA, who has also accepted funding from the Bill & Melinda Gates Foundation would approve the Pfizer vaccine before it had finished its clinical trials! We are living in a completely corrupt political and economic system and we better wake up soon!

FDA Approves Gates Vaccine after Accepting Funding from Him

The FDA has given full approval to Gates’s Vaccines because it has been under tremendous political pressure to do so. Even CNBC reported that “Federal health officials had been under mounting pressure from the scientific community and advocacy groups to fully approve Pfizer and BioNTech’s vaccine ever since the drugmakers submitted their application to the agency in early May. The companies submitted a Biologics License Application, which secures full approval, to the FDA on May 7 for patients age 16 and up.”

Meanwhile, in London, an investigation has revealed that the Bill & Melinda Gates Foundation are the primary funders of the UK’s Medicine & Healthcare products Regulatory Agency just as they are if the FDA in the United States. The SEC has done absolutely NOTHING about insider information since Gates is also a MAJOR shareholder in Pfizer / BioNTech mRNA. There are reliable medical organizations opposing these vaccines despite the approval by two regulatory agencies that are taking money from Gates which only introduces conflicts of interest and potential corruption. The CDC report on deaths shows that NOBODY has died of COVID, it has acted as the flu does and the two groups where the deaths take place are those overweight and with diabetes. So why are they insisting upon vaccinating children?

I have not been against vaccines and have taken the flu shot. But this is seriously different. When government agencies are taking money from Gates who is an open advocate of depopulating the world, this just does not smell right. The FDA has NEVER approved a completely new type of medicine in less than one year which raises serious questions about corruption. The average time it takes to get approval from the FDA is 12 years!

Any news organization that simply cheers the FDA and Gates is failing humanity and their own families.

INVESTIGATION – Bill Gates has major shares in both Pfizer & BioNTech, and an FOI has revealed he is the primary funder of the MHRA

BY DAILY EXPOSE ON AUGUST 20, 2021 • ( 41 COMMENTS )
An investigation has revealed that the Bill & Melinda Gates Foundation are the primary funders of the UK’s Medicine & Healthcare products Regulatory Agency, and that the Foundation also owns major shares in both Pfizer and BioNTech.

The Medicine & Healthcare products Regulatory Agency (MHRA) extended the emergency authorisation of the Pfizer / BioNTech mRNA jab in the UK to allow it to be given to children between the ages of 12 – 15 on the 4th June 2021.

At the time, the Chief Executive of the MHRA, Dr June Raine said the MHRA had “carefully reviewed clinical trial data in children aged 12 to 15 years and have concluded that the Pfizer vaccine is safe and effective in this age group and that the benefits outweigh any risk”.

We are left wondering if Dr June Raine and the MHRA have even read the results of the extremely short and small study. If they have then they would have seen that 86% of children in the study suffered an adverse reaction ranging from mild to extremely serious.

Just 1,127 children took part of the trial, however only 1,097 children completed the trial, with 30 of them not participating after being given the first dose of the Pfizer jab. The results do not state why the 30 children did not go on to complete the trial.

The information is publicly available and contained within an FDA fact sheet which can be viewed here (see page 25, table 5 on-wards).

There was never any doubt that the MHRA would give emergency authorisation for the Pfizer / BioNTech vaccine to be used in children when you consider that a certain Mr Bill Gates owns shares in both Pfizer and BioNTech and is the primary funder of the MHRA.

The Bill & Melinda Gates Foundation bought shares in Pfizer back in 2002, and back in September 2020 Bill Gates ensured the value of his shares went up by announcing to the mainstream media in a CNBC interview that he viewed the Pfizer jab as the leader in the Covid-19 vaccine race.

“The only vaccine that, if everything went perfectly, might seek the emergency use license by the end of October, would be Pfizer.”

The Bill & Melinda Gates Foundation also “coincidentally” bought $55 million worth of shares in BioNTech in September 2019, just before the alleged Covid-19 pandemic struck.

The MHRA received a grant from the Bill & Melinda Gates Foundation in 2017 to the tune of £980,000 for a “collaboration” with the foundation. However, a Freedom of Information request which the MHRA responded to in May 2021 revealed that the current level of grant funding received from the Gates Foundation amounts to $3 million and covers “a number of projects”.

Can we really trust the MHRA to remain impartial when its primary funder is the Bill & Melinda Gates Foundation, who also own shares in Pfizer and BioNTech? We don’t think so.