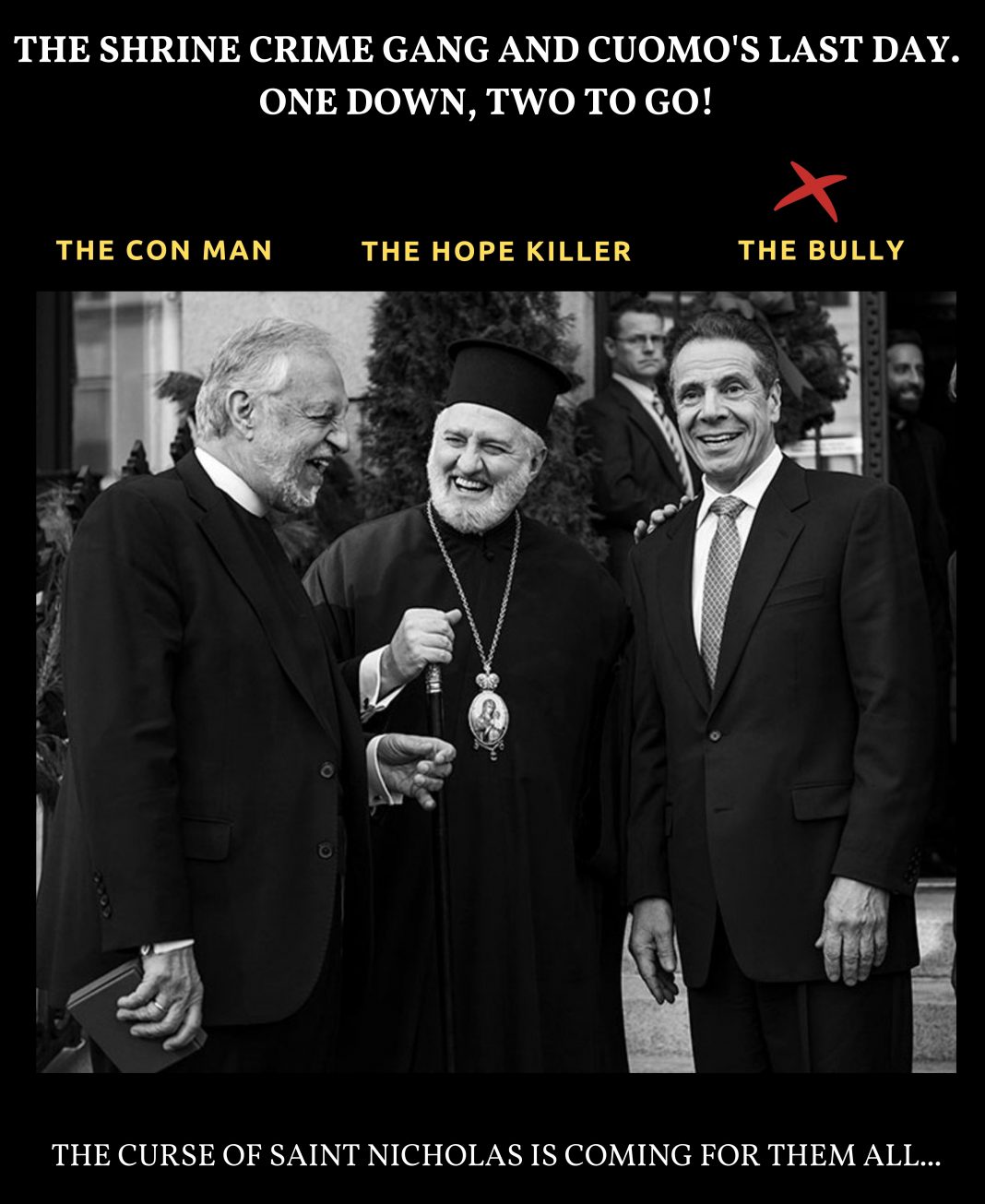 “The first time I came face to face with Andrew Cuomo, he threatened to punch me”, says George Marlin, as he opens his essay about “The Tragedy Of Andrew Cuomo” (posted below – a wonderfull piece that reads like a novel).  Truly, he manages to capture in this one line the real “bully” that Andrew Cuomo was: arrogant, narcissistic, indifferent for others… He was so universally hated that nothing could save him in the end…  He managed to destroy not only his political career but also his family name and legacy, as the NY Legislature is getting ready to rename the Mario Cuomo Bridge back to Tappan Zee Bridge…

As we said recently, in a post titled “Show Me Your Friends and I Will Tell You Who You Are”,  the bully Andrew Cuomo found many friends in GOA, equally narcissistic and arrogant: the two sides took advantage of each other perfectly.  But now that Cuomo is gone forever (please do not doubt me on this), the “orphaned” Karloutsos & Co. is scrambling to replace the access to power…  The timing was not that good, as along with Cuomo their other corrupt horse, Joe Biden-opoulos, was collapsing. What a disaster! They were losing two major “power pawns” in one week!! Even CNN was turning against Biden-opoulos!! 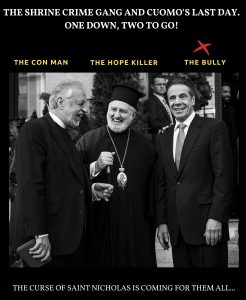 They did not waste much time and they organized last weekend a luncheon in the Hamptons’ Capri Hotel, for the lieutenant Governor, Cathy Hochul (her husband was the lawyer for 8 years for Barack Obama), who is assuming power in Albany tonight.  Present were many prominent members of Karloutsos & Co., including Catsimatides and the rising star of the NY State Senate, baby-killer Michael Giannaris – yes this is the “proud Greek” hosted regularly by AB Elpidophoros, the politician who promoted like nobody else abortion at the day of birth!! Yes my friends, our “beacon of faith”, AB Elpidophoros has no problem at all congratulating “baby killer” Giannaris!! And then we are wondering why the Churches are empty every Sunday!!

Some sources tell us that Karloutsos, seeing the writing on the wall (looking ahead the democrats are politically dead in the foreseeable future) has already started knocking on republican doors and has approached Long Island congressman Lee Zeldin who is likely to run for Governor next year… Somebody, please explain to Mr. Zeldin who is he dealing with… Somebody, please tell him that Karloutsos is a semi-retired “Rasputin”, a “Prince of Darkness” that will cost him more votes than he pledges to bring to him…

No matter what they do, they have already seen the signs from high above.  The problem is they have no true faith to believe these signs… Well, be patient my friends… The Curse of Saint Nicholas has been working for quite some time now… Repentance would be the only way to save themselves – and Saint Nicholas holds the door of repentance open until the last minute… But they are so full of themselves and so faithless that nothing moves them in the right direction… So they are very likely to go up in flames like their corrupt, arrogant, and narcissistic friends…

The Tragedy of Andrew Cuomo

The first time I came face to face with Andrew Cuomo, he threatened to punch me.

In September 1977, while I was waiting to escort Conservative Party nominee Barry Farber into an NYC mayoral candidates’ forum held at St. Sebastian’s parish hall in Woodside, Queens, I booed Mario Cuomo when he took to the podium. And at 6-foot, 6-inches tall, I stood out as the guilty culprit.

Shortly thereafter, when poking my head outside to see if Farber’s car had pulled up, Andrew Cuomo turned to several of his buddies, and said, “Let’s go beat the s—t out of that guy.”

An old friend overhearing Cuomo, followed them outside and waved his cane as they approached me. Having second thoughts, the hooligans retreated back into the parish hall.

The image of the 19-year-old Cuomo that night has stuck with me all these years, because from that time until he announced his resignation on August 10, he had not changed very much. He has always been a ruthless bully.

During the 1977 mayoral battle between Mario Cuomo and Ed Koch, the rules of civility didn’t apply to Andrew. To his dying day, Koch held him responsible for “VOTE FOR CUOMO, NOT THE HOMO” flyers that circulated throughout Queens County.

Serving as campaign manager in Mario’s successful races for lieutenant-governor in 1978, and governor in 1982, Andrew’s “take no prisoners” reputation grew by leaps and bounds.

On election night 1982, Governor-elect Cuomo, describing his son as “24 going on 68,” named him head of his transition team. In that job, Andrew further enhanced his reputation for playing political hardball as he aggressively fired holdovers from the outgoing Carey administration.

As the governor’s Special Assistant, Andrew was known as an intolerant political hothead and was dubbed the “Prince of Darkness.”

Like his father, Andrew has trusted only family members.

Like his father, Andrew has been a control freak, incapable of delegating authority to executive chamber subordinates. His finger had to be in every governmental pie. He insisted on total control over every decision, even routine ones.

Staff members feared Andrew’s wrath. They were afraid to speak or negotiate in his name. There wasn’t anyone who could stand up to him and say “no” to his demands or to criticize his behavior.

In fact, when Andrew was secretary of Housing and Urban Development, he distributed to his senior staff copies of Machiavelli’s The Prince, telling them, “This is my leadership philosophy.”

Unlike his father, Andrew had no core governing principles. Whatever worked to maintain his power was all that mattered.

And while Mario looked to Andrew to be his political henchman, Andrew served as his own enforcer. He thought nothing of badgering or verbally assaulting anyone who got in his way. By all accounts, he relished the role.

As the years passed, Andrew’s ruthless approach to governing took its toll. State employees and elected officials may have feared him, but they also hated him with a passion.

Albany political wags agree that after 10 years in office, Cuomo had few friends and a long list of enemies. Hence, it came as no surprise that he had little support after revelations of his alleged public and private behavior made front-page headlines.

Like Richard Nixon in 1974, Cuomo had given his adversaries a sword and they used it with relish to cut him to pieces.

When Cuomo’s most ardent defender, Chief of Staff Melissa DeRosa, abandoned him, one could hear the death knell. Forty-eight hours later, the forsaken governor announced he was resigning.

This sad ending did not have to be.

After his disastrous campaign for governor in 2002, I, and many others, thought Andrew had learned his lesson — that he was discarding Machiavelli.

He reached out to political conservatives like me to discuss policy issues. He even appointed me to his gubernatorial transition team and to his council of Economic and Fiscal Advisors.

But his outreach was a charade. By the end of his first year in office, Andrew reversed to his old self — the great intimidator, the hulking bully.

Yet, while Cuomo has dodged an impeachment trial conviction, he has imposed on himself a life sentence.

For the remainder of his days, he must live with the knowledge that he disgraced his family name.

Andrew’s description of his father as a public intellectual, as a humanist who “had strong feelings of right and wrong based on his religion, philosophy, and life experiences,” will take a backseat to Andrew’s fall from grace.

And that is a tragedy.