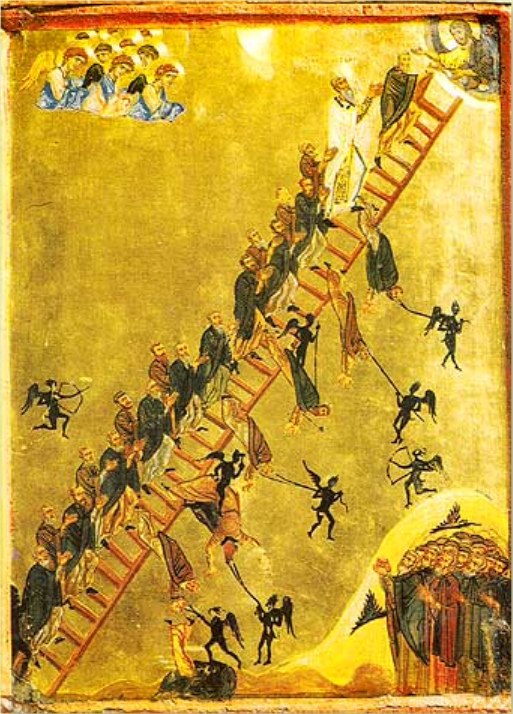 Dear Sir,
It was careless of me to submit my piece on “paths to salvation” to you for publication without first seeking the advice and counsel of the Synaxis of the Holy Fathers of the Monastery of Saint Katherine.
My mention of the Monastery of Saint Katherine attached to my submission mistakenly inferred that the monastery is in agreement with the information I provided to you and that I received a blessing from the Synaxis for the submission.  I can assure you that this is not the case.  It is necessary for me to disassociate my own thoughts and information to you from that of the monastery because I failed to first receive permission from the monastery to do so.  A thoughtless act on my part, for which I will take full responsibility.
Also, the biographical sketch attached to my piece is decades old, making it “very old news” therefore not relevant or accurate regarding my current presence or standing in the brotherhood of the monastery.
Respectfully, in the service of Christ,
Archimandrite Makarios

It is obvious that the absolutely corrupt and unethical “powers that be”, the same powers that “convinced” Patriarch of Alexandria and All Africa Theodoros to finally accept the “cacocephaly”/autocephaly of Ukraine, were very upset that the divine message from Sinai reached the American Orthodoxy… And so they started the hand-wringing… We will keep the rest of this post as it is – without a doubt it is one of the most beautiful posts Helleniscope has ever published – a true monument to Orthodox faith.  As for the “powers that be”, I am glad they are afraid of us… They should be afraid because they are heretics… Helleniscope will fight them to the end… Evil and heresy will never win…  We repeat here the question to AB Elpidophoros:
“Your Eminence, can you name one Orthodox saint who has prayed with or  participated in liturgies with priests of other Christian dogmas?” There is NONE.  We have had several heretic Patriarchs and other hierarchs who were excommunicated. But none of our Saints shares these “ecumenist” views. And this is a short answer to this heresy.

Helleniscope’s audience has been reacting for many weeks to the infamous statement by AB Elpidophoros at the “Religious Freedom Summit” in Washington DC on July 16, 2021:  “When you elevate one religion above all others, it is as if you decide there is only one path leading to the top of the mountain.  But the truth is you simply cannot see the myriads of paths that lead to the same destination…”  We have published our response and the responses of others who are largely in agreement that this statement, (given Elpidophoros “ecumenist” past and actions, including his geopolitical adventures), constitutes pure heresy.

So when I received the message (through an intermediary) from Archimandrite Father Makarios (Mannos) of St.Katherine’s Monastery at Sinai, Egypt, responding to this heretical statement (following below), a friend of Fr. Makarios suggested an even shorter response to AB Elpidophoros, a response in the form of a question:

“Your Eminence, can you name one Orthodox saint who has prayed with or  participated in liturgies with priests of other Christian dogmas?” There is NONE.  We have had several heretic Patriarchs and other hierarchs who were excommunicated. But none of our Saints shares these “ecumenist” views. And this is a short answer to this heresy.

Below is the little longer – but filled with wisdom – answer by Father Makarios of Sinai:

“Many of the adventurers starting out to climb Mount Everest don’t make it to the summit. Many die trying. Study the twelfth-century icon depicting the book, The Ladder of Divine Ascent, by Saint John Klimakos: 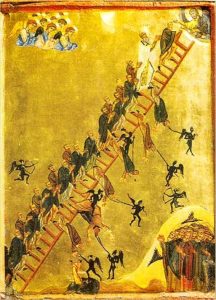 There are far more people who start out on the challenge of Spiritual Perfection, with very, very few who make it to the top of the Spiritual Mountain, even though there is visible help (prayerful people, and angels) directing their support to those who are trying to make the ascent.  Also present are the devil’s playmates who are depicted pulling strugglers off the Ladder.  One will notice, as well, that as the steps get higher, so also the ascent becomes steeper.  Our Lord and Savior Jesus Christ is Himself at the top of the ladder, reaching out a welcoming hand to those who reach the top of the Ladder.  Of course, the person on the top rung is Saint John of the Ladder. 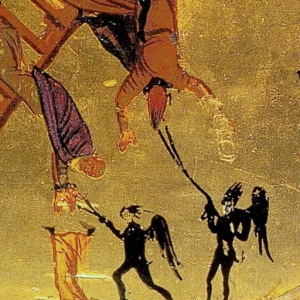 In days gone by, Orthodox Christian pilgrims would come to Saint Katherine’s monastery and as a spiritual exercise, climb the Holy Mountain, Mount Moses, Mount Sinai, Mount Horeb, (All these names for the same mountain but very affectionately and correctly called “The God-walking Mountain” by the monks of Saint Katherine’s monastery).  How so?  The Prophet Moses ascended the mountain and experienced the presence of God there (Exodus 19).  Five hundred years later, the Prophet Elias came to the same mountain and also found God there, not in the noise of this world, but in a “still small voice”.  (I Kings 19).
A stairway numbering over 3000 steps was built by the monks to make it easier for people to ascend the mountain.  At a certain time in the history of the monastery, a monk named Stephen came to dwell as a hermit on Mount Sinai.  When he saw pilgrims ascending the stairway he would stop them and ask them questions about the nature of Orthodox Christianity.  If their answers were not satisfactory, Saint Stephen would not allow the pilgrims to continue their climb.  He would send them back to the monastery where they were given guidance on matters of the faith.  Then, they would climb the mountain to where Saint Stephen was located, to explain to him what they had learned.  He would then allow them to continue the climb.  Such was the spiritual exercise related to the ascent of the God-walking Mountain.  That sense of spirituality has, for the most part, disappeared.  Nowadays, people of all religions or no religion climb this mountain, not to share the ethos of its holiness but rather to experience the glorious sunrise, not to be experienced in any other place in the world.

Yes, there is only one path to the summit of this mountain. We who are here now at this holy monastery pray that we, and those who come to us, whoever they may be, also experience the presence of God in this holy place.

Respectfully, in the Service of Christ, 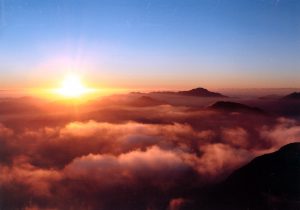 One could certainly write a whole book about Father Makarios, judging from the kind of information I received from a couple of very close friends of his in just one hour of conversation. The first Sinai monk born in America, a Korean War veteran, ordained to a deacon by AB Iakovos, etc., etc… Not quite the Indiana Jones of monasticism – but close…  At a more appropriate time, I will come back to fully present him to our audience – although I can guarantee you that “publicity” in our common sense is outside his life concerns… But this publicity is quite helpful in our times and our Church, where the number one problem is the total absence of any spirituality.

Those of you interested in reading the only biography of Father Makarios Mannos available please follow the link here... If you have the wrong idea that true holy men, like Fr.Makarios, do not use words like “cool” and “man” – forget it.. You need to read the Bible again… Christ picked simple fishermen to become his disciples and, if they lived today, they would definitely use words like “cool and “man”…