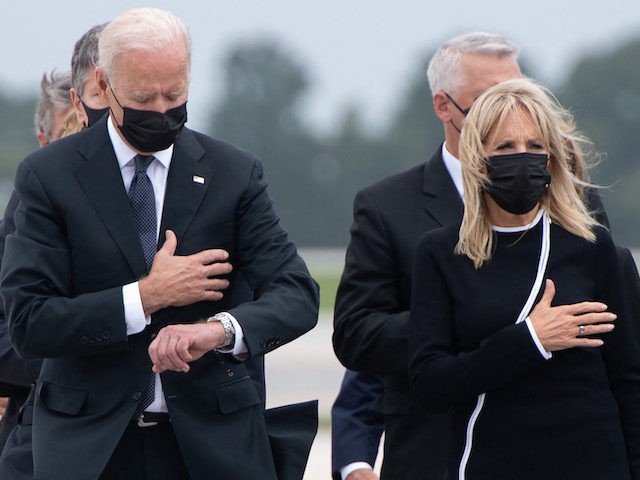 President Joe Biden’s appearance at the dignified transfer of remains of the 13 soldiers slain in Afghanistan on Sunday was sharply criticized, according to accounts of the ceremony by family members.

One woman screamed at Biden across the airport tarmac, “I hope you burn in hell! That was my brother,” according to Mark Schmitz, the father of 20-year-old Lance Cpl. Jared Schmitz ,who was killed in the suicide bombing attacks outside the Kabul Airport, speaking to the Washington Post.

Schmitz said he attended the ceremony with his ex-wife, and he glared as he said the president spent more time looking at his ex-wife while he spoke about his son Beau Biden, who died from cancer after leaving the military.

Biden bristled at the comment from Schmitz. He said, “I do know their stories.”

Schmitz is one of many family members who spoke out about their visit with Biden at the Dover Air Force base.

“It’s got to be difficult. I’m not saying it was easy at all. But you can’t run up and hug someone as if you had nothing to do with it. It’s not going to work that way when you’re commander-in-chief,” he told the Post.

Schmitz indicated he grew weary of Biden talking about his son Beau Biden’s death, in an attempt to sympathize with the family:

When he just kept talking about his son so much it was just — my interest was lost in that. I was more focused on my own son than what happened with him and his son. I’m not trying to insult the president, but it just didn’t seem that appropriate to spend that much time on his own son.

Slain Marine Corps Lance Cpl. Rylee McCollum’s sister Roice noted that Biden’s words did not comfort the family — especially her brother’s wife ,who was pregnant with his child.

“My dad and I did not want to speak to him. You cannot kneel on our flag and pretend you care about our troops,” she said. “You can’t f— up as bad as he did and say you’re sorry. This did not need to happen, and every life is on his hands.”