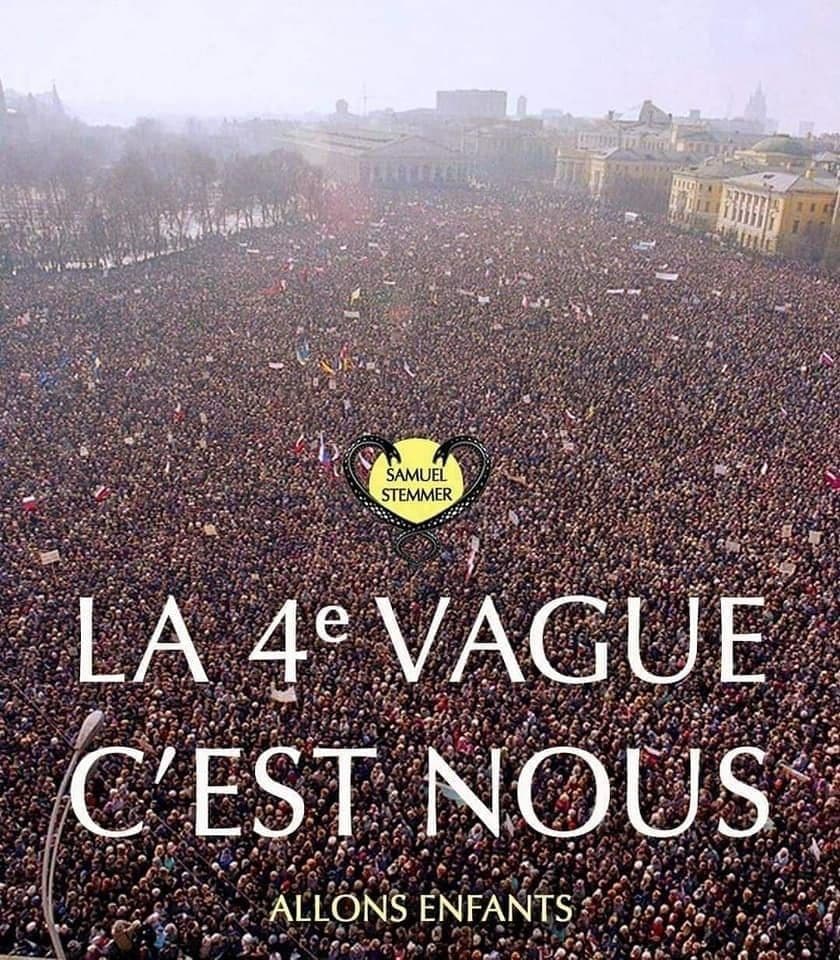 EDITOR’S NOTE (Nick Stamatakis): Over 200.000 demonstrators in Paris shouting “Allons Enfants” and “We are the 4th Wave” (of covid…) shook the political establishment: “We are not anti-vax but we are anti-discrimination and pro-freedom” explained many of them.

Meanwhile in Israel, the most vaccinated country on earth, the cases soar, the hospitals fill with already vaccinated patients and the suspicions grow that THE VACCINE HAS REDUCED NATURAL IMMUNITY!!!

In Massachusetts, nearly 20,000 fully vaccinated residents have now tested positive for COVID-19 and more than 130 of them have died, according to the latest state data on breakthrough cases published Tuesday.

The failure of the vaccine promoters is so complete that Pfizer CEO Albert Bourla announced Wednesday that his company is developing a twice-a-day pill (some say it is much like ivermectin but costs 100 times more) and it can be used along with vaccines or prophylactically!! The hypocrisy is monumental!!

My friends, it seems to me that the Covid scare is almost over… It collapsed in an avalanche of lies and deceptions…

RIO DE JANEIRO, BRAZIL – Tens of thousands of protesters took to the streets across France for the fifth straight week to demonstrate against the government’s coronavirus (Covid-19) vaccine passport mandate.

An estimated 215,000 people joined the protests in Paris, Nice, Marseille, and other French cities. That was slightly down from the 237,000 people who demonstrated the previous week, according to France’s Ministry of the Interior.

The fourth week of protests was the largest and included marches in Paris, Nice, Montpellier, and Lyon, where police used tear gas on protesters who threw objects at police.

Roughly 1,600 police officers were deployed over the weekend for three separate marches in Paris. Authorities did not provide information on whether there were any arrests.

The protesters opposed mandatory vaccination for health care workers and health passes to access many public indoor activities. They often chanted “freedom,” “pass equals apartheid,” and “take back your pass,” referring to the vaccine passport.

Some French citizens told media outlets that the Covid-19 passports limit their freedoms and are a way to segregate society for political purposes rather than health reasons.

The French Parliament approved the Covid-19 health pass law in late July. The country’s top court upheld the law earlier this month, as well as a law mandating Covid-19 vaccinations for all health workers.

The new regulations endorsed by French President Emmanuel Macron made it obligatory to have a full course of vaccination against Covid-19, a negative test, or be recently recovered from the virus to enjoy routine activities.

Macron, who faces re-election next year, hopes to encourage all French to be vaccinated against Covid-19 and defeat the virus and its fast-spreading Delta variant.

Beginning Aug. 9, a health pass was required in France to eat in a restaurant or enjoy a drink at a cafe – both indoors and on a terrace. It was also required on inter-city transport, including high-speed trains and domestic flights. The health pass is not needed on metro systems and suburban transport.

Establishments that fail to enforce the rules will face penalties, while employees could face pay suspensions if they fail to get vaccinated. A health pass will also be required for non-urgent visits to medical facilities. Young people ages 12 to 17 are exempted from the rules until Sept. 3.

The pass has already been required since July 21 to visit cultural venues such as cinemas, theaters, and museums. Its extension was approved by France’s Constitutional Council on Aug. 5.

French government spokesman Gabriel Attal said the pass, which under current rules will be required until November 15, is needed to avoid further restrictions amid a fourth wave of the Covid-19 pandemic.

Some media outlets claimed the protests were part of what is called the “anti-vaxx” movement, but many French demonstrators have said they support the vaccines but not the restrictions. “I am for the vaccine and had it months ago, but not the health pass, which is discriminatory,” one protester said.

Critics argue the rules encroach on civil liberties in a country where individual freedom is highly prized.

Florian Philippot, former vice president of the National Front and one of the leading opponents of the health pass, claimed that “there are many constitutional principles that are trampled underfoot by this law.”

“So far on the Covid crisis, the Constitutional Council has not been noted for its ability to go against the decisions of the government, to say the least,” he said.

There were also demonstrations in Quebec, Canada, which recently mandated Covid-19 vaccine passports for restaurants, bars, and gyms.

“It should be the choice of each person whether to be vaccinated. With the passports, it is a means of forcing us [to get vaccinated],” said Veronique Whalen of Montreal, the most populous city in the province of Quebec.

The green pass, an extension of the European Union’s digital Covid certificate, became compulsory in Italy earlier this month to enter cinemas, museums, and indoor sports venues or eat indoors at restaurants.

More than 1,000 people gathered in Piazza del Popolo in central Rome shouting “No Green Pass!” and “Freedom!” Thousands more marched in Milan. Around 100 people from the “No Vax” movement also gathered in Naples, objecting specifically the vaccinations for children. They were shouting “Hands off the children” and “Shame! Shame!”

The green pass proves bearers have either been vaccinated with at least one dose, have recovered from Covid-19 within the past six months, or have tested negative in the previous 48 hours.