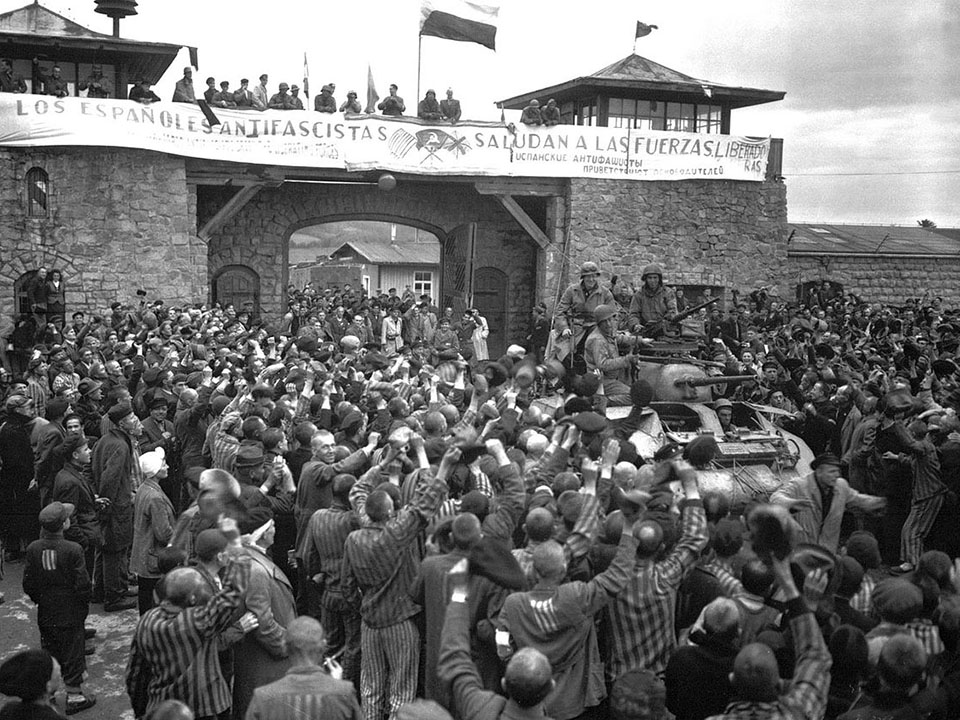 What was the first song the freed radio station of Kabul Afghanistan played in 2001 upon its Liberation by the Northern Alliance assisted by US Army Special Forces? It was “Andonis” from Mauthausen by Mikis Theodorakis… The same song was used by Kurdish women as a call to arms in their fight to protect their town of Kobani (Syria) from ISIS… Below we present two famous songs from the trilogy of “Mauthausen” with their lyrics and some points about their history…

And then the famous march “Andonis”…  Who was Andonis? Here is how the author, Iakovos Kabanellis, describes Andonis….

“It was afternoon. The SS, the leaders of the convicts’ crews, had by that time” killed “17 Jewish and Russian prisoners of war. As soon as someone stumbled, they dragged him to the barbed wire fence. He then wrote on a block, “Prisoner No. 137,566, attempted to escape, was executed on the spot.” He kept this note for the evening report. discipline leads to freedom. “On one of the steps of the quarry, a Jew began to stumble. Antonis motioned for him to approach. The Jew approached and Antonis held his own elbow with his right and left He lifted the Jew’s elbow, but this happened in the middle of the stairs. He was still very much upstairs. The SS saw them and separated them. knelt on the steps. ES approached and told him to open his mouth. The Jew opened his mouth. ES took out his revolver, put it in the Jew’s mouth and fired. Then he turned to Antonis and rolled his eyes at him. Antonis beat him fearlessly. Then he approached the dead man, loaded the second elbow and continued to climb the stairs. ES-ES froze. He said nothing. He did nothing.

a hidden distribution of freedom
But when they returned to the quarry to reload their elbows, he shouted for Antonis to go near. He started walking like a maniac among the stones and searching. He found an elbow twice as big as the others, showed it to Antonis and said “This is yours”. Antonis rolled his elbow, then ES-ES, then the scattered elbows around him. Everyone else pretended not to see, not to hear. In Mauthausen, one for all and all for one was the law. They trembled at what would come out of this entanglement. This Greek was doing it lightly. ESES had already taken his revolver out of its holster, rubbed it nervously on his pants and they were getting ready. Antonis stopped in front of an elbow even bigger than the one chosen by ES-ES. “This is mine,” he said and uploaded it. In all the streets they did until the night, until it was time for inside, Antonis chose and loaded the heaviest elbows. That same night, the camp was talking about the Greek Antonis from one end to the other.

Such news shook Mauthausen. It was a secret distribution of freedom. “

The song was also sung in Kabul when it was liberated from the Taliban in 2001, as Northern Alliance troops greeted people as they entered the city.

Specifically, during the departure of the Taliban but also during the opening of Radio Afghanistan which had been closed by the regime, the first track that was heard was “Watan” (Homeland in Greek) based on “Antonis”. The song was performed by Adbul Wahab Madadi, a famous Afghan singer, academic and director of the country’s public radio and television for thirty years, including Soviet rule in the region (1978-1989). At the time the trilogy was circulating in Europe, Madadi was studying journalism in Cologne, Germany. He recorded “Watan” in 1980 with lyrics by Nasser Tahuri in a creation that is an adaptation of the work of Theodorakis – Kampanelli. In 1982, Madadi recorded a second track based on the theme of “Antonis”, called “Shahidan” (Witnesses) and describes the long civil war in the country. Twenty years after the liberation of Kabul, in yet another tragic situation, Mikis “leaves” as the Taliban recapture Afghanistan.  Here is Andonis in Kabul:

There in the wide staircase
the staircase of tears
in the deep Wiener Graben*
in the rock quarry of mourning
Jews and partisans** are walking
Jews and partisans are falling to the ground
they are carrying each of them a heavy rock on their shoulders
a rock, a deadly cross.
There, Andonis, is hearing
a voice, a voice calling him
oh camarade, oh camarade
help me climb up the stairs.
But there in the wide staircase
the staircase of tears
such a help is an insult
such an empathy is a curse.
The Jew is collapsing on the step
and the staircase becomes red
you, my brave one, come here
and carry a rock double in size***.
I’m taking one double in size, i’m taking a triple in size
my name is Antonis
and if you are man enough, come here
( to fight with me) in the marbled battle field.****