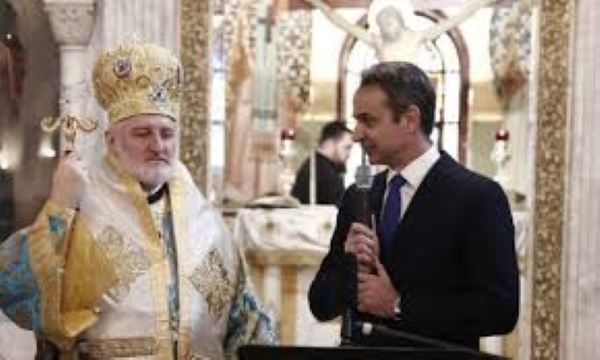 UPDATE Sep 23. 8pm: We just saw that the Archbishop has issued an apology... An apology is always welcome in Christianity – this is the cornerstone of our faith. And it is always welcome. Having said that, I have to note that I have heard the Archbishop issuing apologies very often, to the point that the word “apology” is losing its meaning.  Especially for this issue, “bowing to the Turks”, the apology IS NOT ENOUGH.  Why? Because it has become standard practice for the Archbishop to bow to the Turks. Let me count the ways: 1) Visits by Turkish consuls to his office and Met. Nathanael office. 2) His visit to Erdogan’s hotel in New York. 3) Patriarch Bartholomew’s stay in the Turkish Ambassador’s house in DC FOR DAYS a few years ago. 4) The evident open lines between 79th Street and the Turkish Foreign Ministry. Should I remind all the lengthy visit at Phanar of the new Turkish ambassador to DC a few months ago and the detailed discussion that ensued?  I will stop here… Apologies for this issue are not going to solve the problem – it will take many years to regain trust.  And AB Elpidoktonos does not have that much time left in America – one way or the other…

After both PM Mistotakis and Cyprus President Anastasiades canceled their meetings with AB “Elpidoktonos” at 79th Street, a great effort was made by GOARCH and their allies to schedule a photo-op between the Greek PM and the Archbishop at Ground Zero for a tour of St.Nicholas.  Yet, when the time came to confirm it, Mitsotakis took a look at the rage throughout the Greek-American community and the front page news in Greece and Cyprus and calculated that this one photo with AB Elpidoktonos will cost him dearly, as he is already struggling in the polls. And everything was canceled…

You can read the news below – but here I have to make a few notes that you will not read anywhere else:

There are no words to describe the anger I heard, read, and witnessed the last 48 hours… This is definitely a turning point for our Church and community.  I am just hoping it’s not too late to save what can be saved.

BELOW: Turkish Oil & Gas Exploration Ship: – We need an open-minded man of God to Bless our Exclusive Economic Zone and our “Blue Homeland”…

-Sure, the Archbishop of America…. 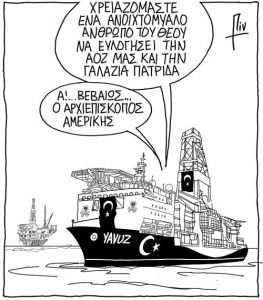 In an unsurprising but shock turn around, Greece’s Prime Minister Kyriakos Mitsotakis has cancelled his scheduled meeting with Greek Orthodox Archbishop of America Elpidophoros in New York.

The cancellation is being interpreted as both an act of solidarity with Cypriot President Nikos Anastasiadis who also cancelled his meeting with Elpidophoros, and an expression of  dissatisfaction with Elpidophoros after he attended the inauguration of the Turkish Centre in New York in the presence of Erdogan.

Greek government sources have suggested that the reason for the cancellation was a scheduling conflict after the addition of a meeting with the Editorial Board of the Wall Street Journal to the Prime Minister’s diary.

However, it is obvious that Mr. Mitsotakis does not want to meet with the Archbishop  due to his presence at the inauguration of the Turkish centre.

“We were disturbed by the actions of the Archbishop. The Greek government expresses its dissatisfaction ” said Mr Economou.