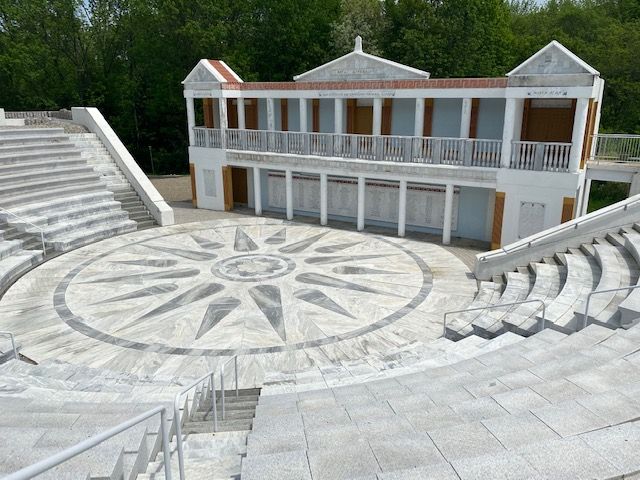 EDITOR’S NOTE (Nick Stamatakis): It was a warm May afternoon this year when, returning from Boston, we stopped at Storrs, Connecticut, to see the Sparta Museum and Theater that was being built by a team lead by dedicated professor Ilias Tomazos.  What we saw left us speechless: Ilias Tomazos, director of Hellenic Studies Paideia and Professor of Modern Greek Studies at the University of Connecticut, was on top of the hoof of a bulldozer putting the finishing touches on one of the outside walls… Such a level of dedication is rarely matched by anyone in our community – and we are very dedicated people.  When you will find out how little the whole building of the Museum and Theater cost – thanks to this group of very dedicated people around Ilias,  you will be amazed.  It was literally “pennies on the dollar”… My congratulations to Ilias Tomazos, he is a real hero and his contribution to our community cannot be expressed by words… The photos speak for themselves… The Grand Opening will happen at a later point while this weekend the 200th anniversary of the Greek Revolution will be celebrated- and everyone is invited! HERE IS THE PROGRAM OF THE EVENTS SPARTA MUSEUM ANNOUNCEMENT 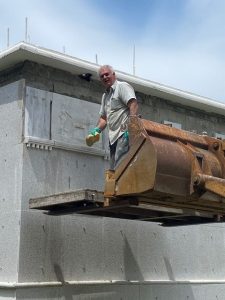 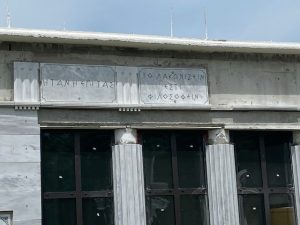 STORRS — Ancient Greece will return to life in Storrs as the Sparta Museum and Theater celebrates its grand opening Sept. 25 and 26.

The open-air, classical Greek-styled theater has more or less been finished for several years, but additions continue to be made, including two more rows of seats to the 12 that already exist.

The theater has been about 10 years in the making, said Ilias Tomazos, director of Hellenic Studies Paideia and professor of Modern Greek Studies at the University of Connecticut.

The theater has not been used in any official capacity yet, Tomazos said, because the only restrooms available until now are at the neighboring Three Hierarchs Greek Church.

He said the initial idea that evolved into a museum was to have a refuge for people in case of rain and to have restrooms.

Over time, the space evolved into something larger.

“It’s not a UConn organization, but it is affiliated in a way, because UConn conveyed the land to have the chapel and to have all these facilities for the good use of UConn and everybody else,” Tomazos said. “In a small way, we’re affiliated. We are very grateful to the University of Connecticut.”

Tomazos said he could not adequately describe in English how grateful he is for UConn and the state of Connecticut’s support for Greek culture and helping finance the museum. He used the ancient Greek word “evgomon” to express his gratitude.

“There is no other university to convey land to build a chapel, a theater, and a museum,” he said. “It’s more than grateful. You can not find the English word to express it.”

The funding for the museum came from community donations and through cooperation of the state of Connecticut, UConn, and the Pan-Laconian Federation of United States & Canada, an advocacy group for U.S. and Canadian citizens of Laconian heritage.

“Laconia is the area around Sparta,” Tomazos said. “Because we have people from Sparta who are with the organization here, they have contacts with the national organization. They gave us a generous donation and because of their donation … let’s name the museum ‘Sparta.’”

In conjunction with the opening of the museum and theater, there will be a celebration on Sept. 24 for two significant moments in Greek history.

Many of the donations to the museum will be provided by Greece itself through Lina Mindoni, the Minister of Culture. Donations will include digital representations and replicas of Greek artifacts, Tomazos said.

Tomazos said that the original concept was for the frieze along the top of the museum was to depict the story of the Battle of Thermopylae, but after receiving input from former UConn President Thomas Katsouleas, things changed. He suggested telling the story of the youth of Sparta instead.

“Every school prepares the youth for the battle of life,” Tomazos said. “What kind of education were they receiving? What kind of games? What kind of preparation for competitions?”

Tomazos said Katsouleas suggested it be “something for our students to have an educational emphasis, not the fighting.”

Though the theater isn’t officially open to the public, he said, students are coming to the theater to study and faculty is coming with students as well.

“Some of my students, when the weather is lovely, will say, ‘Mr. Tomazos, can we go to the theater to have a class?’ The acoustics are better.”

The acoustics of the 500-seat marble theater are meticulously configured so that when a coin is dropped in the center of the orchestra or altar — the center circle of the theater — it can be heard clearly throughout the entire space.

The theater is backed by a two-level skene, the building behind the orchestra. To perfect the sound coming from the logeion, the top level of the building and where the word “loge” comes from, Tomazos said, it had to be 10 to 12 feet off the ground and they made it precisely 11 feet.

Backstage, he said, there will be mosaics — an almost completed mosaic depicts two men slaying a lion — and murals depicting different theaters in Greece.