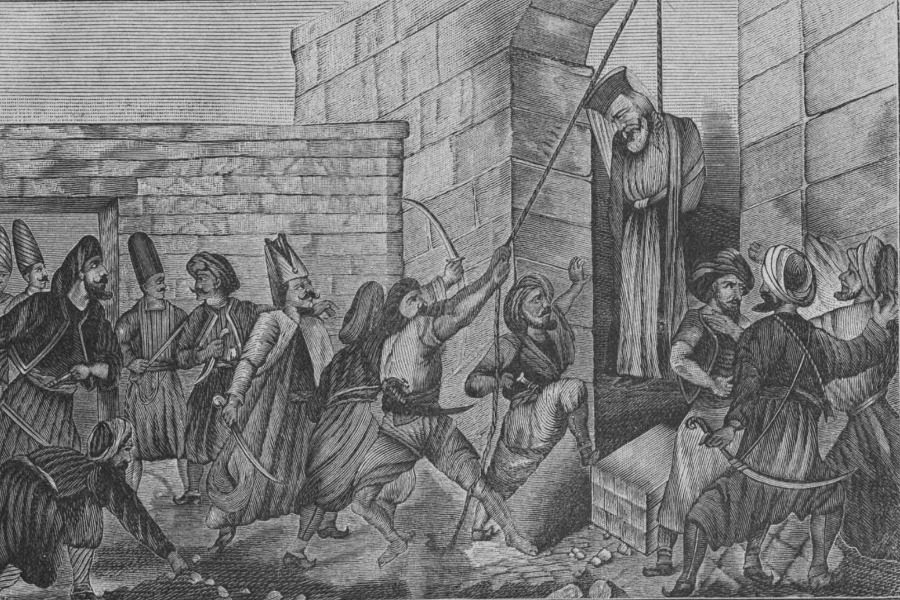 The painting above: The hanging of Patriarch Gregorius the 5th.

EDITOR’S NOTE (Nick Stamatakis): No more Turkish Rule over our Church!! Two hundred years after the Greek Revolution and the hanging of Patriarch Gregorius the 5th (along with other hierarchs as you will see below) not only the Patriarchate but the whole Greek diaspora churches around the globe are controlled by the neo-Ottomans! Enough is enough!! No more under Turkish subjugation!

At around five o’clock in the afternoon on Holy Saturday, 1821, Ecumenical Patriarch Gregory was celebrating the Vesperal Divine Liturgy at the Phanar when Ottoman police surrounded and seized Gregory and the other bishops who were concelebrating with him. They dragged the Patriarch, fully vested, to the main gate of the Phanar, where they hanged him. The ascetic Gregory was emaciated from fasting, and his body weighed too little for the hanging to break his neck and kill him instantly, so he hung for a long time, convulsing into the night before he gave up his holy soul. The Sultan had a notice attached to the body, accusing Gregory of having “secretly acted as the leader of the revolution,” referring, of course, to the Greek Revolution that had just begun. This, despite the fact that Gregory had publicly condemned and excommunicated the revolutionaries.

Four more metropolitans were executed at the same time as Patriarch Gregory, in different parts of Constantinople – Dionysius of Ephesus, Athanasius of Nicomedia, Gregory of Derkoi, and Eugenius of Anchialos. The elderly former patriarch Kyrillos was also hanged, as well as two of Patriarch Gregory’s personal aides. The next day – Pascha – amidst turmoil not seen since the fall of Constantinople in 1453, the Holy Synod elected a new Patriarch, the timid Eugenius II, who had to brush past Patriarch Gregory’s hanging body on his way to the Sultan’s palace to have his election confirmed.

Patriarch Gregory’s body was left hanging for three days, after which the Ottoman government ordered four or five Jewish residents of Constantinople to cut down the body. This group then dragged Gregory’s body through the streets, weighed it down, and threw it into the Bosporus. But through the providence of God, the holy relics did not sink. They floated to the surface and were retrieved by a pious Greek who had taken refuge on a Russian ship. The sailors took Patriarch Gregory’s relics to Odessa, in the Russian Empire, where Tsar Alexander had them buried with great honor. 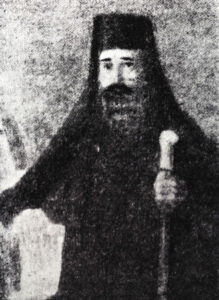 The next summer, Patriarch Eugenius died following what was described by the British Ambassador in Constantinople as “a long and painful illness, occasioned by dropsy on the chest.” His 14 months as Patriarch were filled with constant turmoil. Two days later, the Ottoman government issued this directive to the Greek community (note that “Exalted State” means “Sublime Porte” – that is, the Ottoman central government):

A mixed assembly of clergy and laity immediately gathered and elected Anthimus III, who himself had been imprisoned by the Turks. As one account describes it, “despite the obvious wishes of the clergy, who preferred another, the people clamored for Anthimos so strongly that he won by acclamation.” One candidate, Chrysanthus of Serres, had been born in Macedonia, and a rival, Metropolitan Jeremiah of Derkon rejected Chrysanthus by accusing him of being a Bulgarian: “There is no shortage of Greeks. Why should the Bulgarian become patriarch?” Jeremiah himself would function as the power behind the throne during Anthimus’s patriarchate.

The British Ambassador in Constantinople wrote, “It is satisfactory to observe that in the whole of this transaction, the Ottoman government has acted with so much prudence and propriety, and with such scrupulous attention to the rights and privileges of the Greek National Church.” The Ottomans even went so far as to offer the new Patriarch special honors and treatments which, according to the British Ambassador, had not been shown to any former Patriarch. They also restored the Greeks’ freedom to celebrate feast days, which had been restricted due to fears of large gatherings of Greeks. For his part, Patriarch Anthimus urged his people not to move from Turkey to the territories controlled by the revolutionaries.

At the same time, all that “scrupulous attention to the rights and privileges” of the Patriarchate didn’t include the actual freedom of the Church to choose its Patriarch without Ottoman approval. In the end, the Ottoman state, not the Church, had the final say over who could sit on the Patriarchal throne. This was hardly a new development, but represented the status quo throughout most of the Ottoman period. Patriarchal elections had to be ratified by the Sultan, who also had the power to depose a Patriarch whenever he wished.