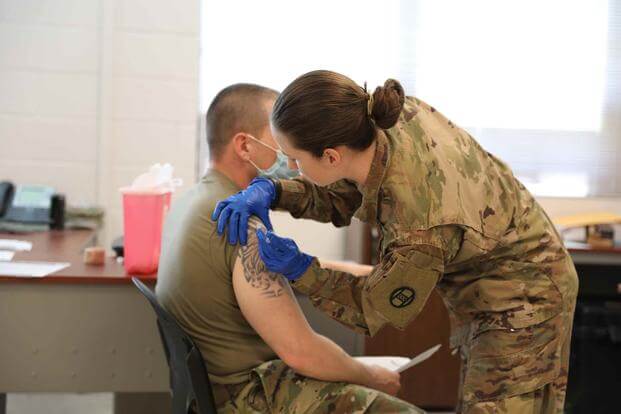 EDITOR’S NOTE: In a remarkable development Catholic Archbishop for the Armed Services Timothy Broglio announced that Catholic troops can refuse the vaccine on religious exemption… Yes, the Church has determined that the vaccine is approved but according to AB Broglio “there is something above the Church’s decisions, the sanctity of conscience”…

AB Elpidoktonos are you listening?

Catholic U.S. troops should be allowed to refuse the COVID-19 vaccine based solely on conscientious objection and regardless of whether abortion-related tissue was used in its creation or testing, the archbishop for the military declared in a new statement supporting service members who are seeking religious exemptions.

“No one should be forced to receive a COVID-19 vaccine if it would violate the sanctity of his or her conscience,” said Archbishop for the Military Services Timothy P. Broglio, in a statement released Tuesday.

Broglio previously has supported President Joe Biden’s mandatory vaccination order for U.S. troops, citing the church’s guidance that permits Catholics to receive even vaccines derived from fetal tissue, when no other vaccine option is available. In his new statement, the archbishop said that while he still encourages followers and troops to get vaccinated, some troops have questioned if the church’s permission to get vaccinated outweighed their own conscious objections to it.

“It does not,” Broglio wrote.

The Archdiocese for the Military Services, created by the church in 1985, claims responsibility for 1.8 million service members and their families at 220 installations. Broglio was appointed by Pope Benedict XVI in 2007.

In August, Broglio was quoted by Catholic News Agency, a publication of Eternal Word Television Network, supporting the Pentagon’s then-forthcoming vaccine mandates, saying the church, including Pope Francis, “had recognized the morality of the vaccine.” But, the article added, “The archbishop said that while a person could object from the mandatory vaccine due to their personal conscience, ‘even that should be formed by the teaching of the Church.’”

Broglio’s Tuesday letter appears to formalize that exemption. It begins with an explanation of how the Pfizer and Moderna COVID-19 vaccines that were tested using an “abortion-derived cell line” are still not considered sinful by the Catholic church because it is “remote material cooperation with evil.”

“The Congregation for the Doctrine of the Faith examined these moral concerns and judged that receiving these vaccines ‘does not constitute formal cooperation with the abortion,’ and is therefore not sinful,” Broglio’s letter reads.

The Johnson & Johnson vaccine, however, “was developed, tested, and is produced, with abortion-derived cell lines,” the archbishop said. Catholics still may accept that vaccine, but only if no others are available and they make known their moral objections.

While the Pope has deemed COVID-19 vaccines to be not sinful, Broglio emphasized the “sanctity of conscience.” If the vaccine violates the sanctity of an individual’s conscience, they should not be forced to receive the vaccine. This deviates from previous statements from the archdiocese, when Broglio encouraged troops to receive whatever vaccine became available.

“In the case of vaccines to protect against the Coronavirus pandemic, the highest doctrinal authority of the Church, speaking on behalf of the Bishop of Rome, has made its clear position on the vaccines available,” said Broglio in March.

In August, Broglio voiced support for the Pentagon’s vaccine mandate. “Certainly, no vaccine is an absolute, but the military is bound to live, work and recreate together,” he said. “It seems prudent to ensure they do not infect each other.”

Two months later, the archdiocese has amended its message.

“The denial of religious accommodations, or punitive or adverse personnel actions taken against those who raise earnest, conscience-based objections, would be contrary to federal law and morally reprehensible,” said Broglio, in his letter.

When Defense Secretary Lloyd Austin announced in August that the vaccine would soon become mandatory, the Defense Department stated that each military service branch would be responsible for determining religious exemptions.

“There is a religious exemption possibility for any mandatory vaccine, and there’s a process that we go through to counsel the individual both from a medical and from a command perspective about using a religious exemption,” Pentagon spokesman John Kirby said at the time.

At the Association of the U.S. Army’s huge annual conference in Washington, D.C., on Tuesday, the second question posed in a town hall with Army Secretary Christine Wormuth was on whether troops could receive vaccine exemptions. Wormuth responded yes, but then emphasized the department’s reasons for requiring the vaccine in the first place.

“The reason that the department has mandated the vaccine for the entire military is because it’s a health safety and readiness issue,” Wormuth said. Army Chief of Staff Gen. James McConville said 91 percent of the Army’s active-duty force is vaccinated.

Those who refuse the COVID-19 vaccine must “continue to act in charity for their neighbors and the common good” by wearing masks, social distancing, and testing routinely, Broglio’s letter closes. And once a treatment becomes available that is “not derived from, or tested with abortion-derived cell lines,” he said, troops should remain open to receiving it.