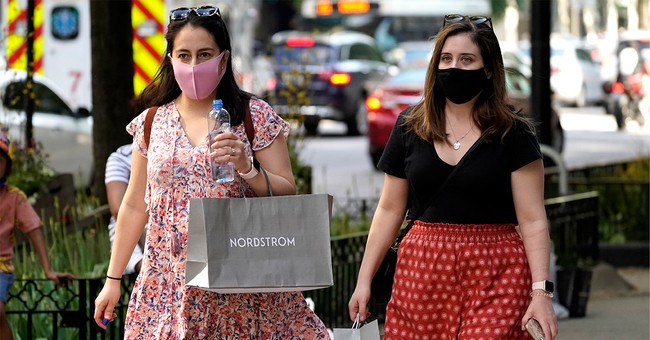 The Centers for Disease Control and Prevention recommends staying 6 feet away from others. In Oregon, everyone must wear a mask outdoors. In parts of the country, 2-year-olds must wear masks.

Are such rules necessary?

“Go Denmark!” cheers George Mason University economist Don Boudreaux in my latest video. “We in the United States should do the same.”

“We reduced COVID, through vaccination, to a fairly mild ailment for the vast majority of people,” says Boudreaux. “You don’t have to worry if the bartender at your favorite bar is vaccinated or not. You are protected against suffering severe consequences. Get vaccinated, and then go about your life normally!”

“We don’t have to continue to upend human life in our quest to eliminate COVID, which can’t happen anyway,” says Boudreaux.

“Smallpox resides only in human beings,” explains Boudreaux. COVID-19 can live in animals — bats, deer, dogs, cats. “We have never eliminated a disease that uses both humans and animals as reservoirs.”

Still, China acted as if eliminating COVID-19 were possible.

They’ve kept deaths much lower (if you believe their numbers) than other countries by imposing nasty repressive measures like quarantines at gunpoint and even locking people in their homes.

Australia’s been almost that tough. They’ve also imposed curfews and arrested people for not wearing masks. In some places, police proudly announced they “smashed windows of people in cars and pull them out … because they weren’t telling us where they were going.”

Don’t worry about losing freedom, says Daniel Andrews, premier of the state of Victoria. “They’re not rules that are against you. They are rules for you.”

“So say all dictators and tyrants,” retorts Boudreaux.

These countries can’t lock down forever. When the lockdowns stop, COVID-19 will return.

“It’s not admitting defeat; it’s admitting reality,” says Boudreaux. “We learn to live with COVID in the same way that we learn to live with many other pathogens. … The bacteria that caused the Black Death is still circulating in the human population. A handful of people every year still die of it.

In the Wall Street Journal, he wrote, “Eradication of Covid is a dangerous and expensive fantasy.”

That’s why, now that we have largely effective vaccines, he says it’s time to end pointless lockdowns and do what Denmark is doing: