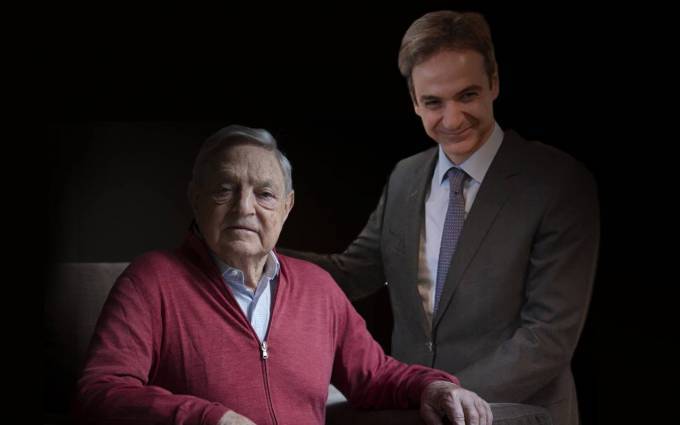 New Democracy expelled Parliament Member Mr. Bogdanos from the party for his comments calling out the Communists and laying a wreath.

I agree with Mr. Bogdanos 100%. Greek Communists and Communism created the entity named Skopia in 1944. The Soviet Communists supplied weapons to Ataturk to mass murder Greeks, Armenians, Assyrians in Asia Minor from 1917 to 1922. Ataturk used these weapons to defeat the Greek Army in Asia Minor.

Is New Democracy a Globalist Party? Yes, it is.

The whole ordeal began when Bogdanos defended his presence at a wreath-laying ceremony at Vitsi in the Kastoria region at an event commemorating the brutal insurgent Communist Battle in August 2021 where the Greek Army routed the Greek Communist insurgents of Greece. Bogdanos and a representative of Golden Dawn were among those who laid a wreath at the ceremony.

I have been complaining about how the Greek Embassy in Washington DC refuses to lay a wreath each year to the Victims of Communism wreath-laying event. The event is hosted by the Victims of Communism Foundation. The nations of Poland, Lithuania, Estonia, Czech Republic, Hungary, etc. send their ambassadors to the event. Not even one official of the Greek Embassy in DC attends!! Yet, Greece was the first nation with the assistance of the Truman Doctrine to defeat the Communist insurgents from 1944 to 1949.

MP Bogdanos and Communist MP Thanasis Paphilis had an exchange in the Greek Parliament. Bogdanos explained how the Communists were an enemy of Greece. According to Katheimerini, the incident began when Bogdanos declared that no one in the chamber can force him to refer to North Macedonia. New Democracy fiercely opposed the Prespa Agreement that recognized Greece’s neighbor by that name, though once it came to power it honored the agreement with Skopje reached by SYRIZA leader and then PM Alexis Tsipras. Bogdanos even marshaled ultra-nationalist Georgios “Digenis Grivas, who was the founder of EOKA B in Cyprus to unite Cyprus with Greece against British rule“Grivas used to say that we have three enemies – The British, the Turks, and the communists. The greatest danger was posed by the communists,” Bogdanos declared.

Is the New Democracy party leadership infiltrated with George Soros puppets? Yes, the following leadership are Soros controlled puppets along with Tsipras, and Papandreou.

Former EU Commissioner Dimitris Avramopoulos is a George Soros New Democracy crony that promoted the illegal Muslim invasion of Europe. From November 2014 to 2019, he served as the EU Commissioner for Migration, Home Affairs, and Citizenship in the Juncker EU Commission. Avramopoulos was an ex-Mayor of Athens. He was a Foreign Minister. He held high positions in New Democracy leadership. This man allowed the Muslim invasion of Europe via Greece under his watch along with Tsipras. He gave a crazy comment about how Europe needs to deal with how Europe is too Christian and Europeans need Muslims. This shows you how the New Democracy Party is no different than PASOK or SYRIZA.

In a November 2009 National Herald article, Kyriacos Mitsotakis attended a closed-door meeting with Alexi Tsipras and George Soros. Stylianos Zavvos hosted the closed-door meeting to honor George Soros at the Athens Club. Zavvos’ brother is in the Mitsotakis government. They discussed geopolitical issues, the US dollar, economy, etc. What did they discuss regarding Greece, Skopia, Albania? The US Ambassador to Greece Daniel Speckhard attended this meeting along with UK Ambassador to Greece David Landsman.

On March 5th, 2019, Kyriacos Mitsotakis sent a letter to European Peoples’ Party (EPP) leader Joseph Daul asking him to suspend Hungary’s Fidesz’s Party led by Victor Orban. In that letter, Mitsotakis accused Orban of violating European standards on his behavior on migration. In other words, Mitsotakis is an EU George Soros Globalist puppet.

George Soros used his puppet, Kyriacos Mitsotakis, to expel Victor Orban’s Fidesz party from the EPP. Victor Orban kicked George Soros foundations and offices out of Hungary. The Soros operations fled to Berlin, Germany. Orban does not accept a single illegal Muslim into Hungary. He has the border wall and troops on the Hungarian borders. Orban advocates for the defense of European Christian Western Civilization against the invasion of Islam and the Globalist elites.

Globalist elites occupy Athens, Greece. The rest of the Greek people in the islands affected by the illegal Muslim invasion want their Christian Greece back. Greeks don’t feel safe walking the streets in Athens, Samos, Lesbos, Kos, Chios, and other islands. Greeks in Athens and across the provinces are affected by high criminal gang activity as the police do nothing. Communist Greeks riot the streets while these same Communists advocate for the illegal Muslim invasion of Greece and Europe. If any patriot Greek protests against the illegal Muslim invasion of Greece, he is labeled a “Racist”. Globalist Elitist Marxists use “Racist” to censor and stop Free Speech. Patriots protect the borders of their nation from mass migration invasion.

Kyriacos Mitsotakis showed his true Soros colors when he attacked Victor Orban and the Fidesz Party in the EU Parliament. Now, he kicked out MP Constantinos Bogdanos.

I’m not surprised he expelled MP Constantinos Bogdanos on October 5, 2021.

I support MP Constantinos Bogdanos for telling the truth on how Greek Communists never stood for Greece.

The Greeks should not be fooled to vote for the lesser of two evils because both New Democracy and SYRIZA/PASOK are Globalist, pro-EU/euro, pro-Islamic migration invasion of Greece/Europe. Greece needs its Victor Orban!

Russian Vesti Investigation News on the Destabilization of Greece, Oct 9, 2017

Soros funded organizations in the USA:

Why You Should Fear George Soros