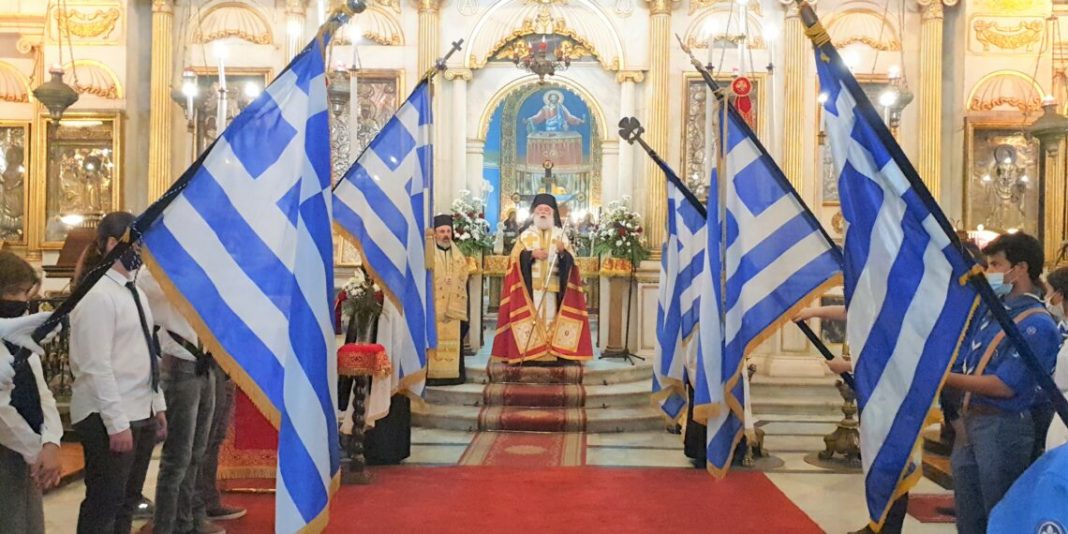 EDITOR’S NOTE (Nick Stamatakis): The recent statement by Pat. Bartholomew showing his contempt for the Russian Patriarchate (“we civilized them”, etc…) along with similar statements by the Pat. Theodoros of Alexandria mentioned by our friend George Michalopulos in his analysis below, bring to the front a very serious “ethnocentrism” of some Orthodox so-called “leaders” who have the wrong idea about what “Ecumenical Hellenism and Orthodoxy” is all about…  In a few words, the “Ecumenism” of Hellenes was eternally defined much earlier than the advent of Christianity by Homer in one of the most beautiful lines of world poetry: “Πλέων ἐπὶ οἴνοπα πόντον ἐπ΄ ἀλλοθρόους ἀνθρώπους” or “Sailing in a wine-blue sea going to people whose tongues they did not understand”.  It was never an imperial imposition, it was never a conquest – even the case of the greatest general of all time, Alexander the Great (whose memory survives fondly to this day in the depths of Asia in Tashkent (Uzbekistan), or in Afghanistan and India).

It was the acceptance and the ability to peacefully live and work with all ethnicities and races that define the “Ecumenism” of Hellenism.  And it was likely this “Ecumenical” worldview that gave birth to Christianity in the kingdoms of the descendants of Alexander the Great in the Middle East and Eastern Mediterranean – and not the ethnocentric “skasila” of Bartholomew, who, two thousand years after Saint Paul desecrated the holiest of all Christianity’s teachings…

BELOW THE BRIDGE IN FRANKFURT, GERMANY, THAT BEARS THE HOMERIC LINE… 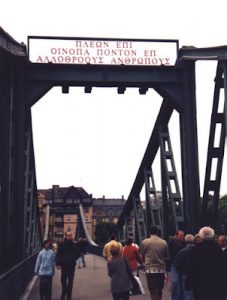 OK, time for the gloves to come off.

In times past, I’ve tried to couch my criticisms of the Phanar.  I’ve overlooked the deficiencies of Alexandria.  I don’t like the inter-ethnic squabbling between Antioch and Jerusalem.

I also know that things are more upbeat in Russia, Serbia, even Bulgaria but even here things aren’t always hunky-dory.  We don’t get to experience perfection this side of heaven.

Still, Orthodoxy is the authentic Christian faith.  Don’t take my word for it, just look around you at the wreckage that is Protestantism and the train-wreck that is the papacy of Francis.  (I will say this about the sodomy scandal:  it’s irredeemable; it’s so pervasive and well-entrenched, you can’t know who the good guys are.)  Still, I don’t like to criticize, especially when we’ve dropped the ball everywhere else.

Yes, I know we appear paltry in comparison to our Western brothers.  The Vatican City is the pinnacle of Western architecture and Renaissance art.  On any given Sunday in America, there are more attendees in a dozen megachurches than there are in the three biggest Orthodox jurisdictions combined.  In Joel Osteen’s Jump for Jesus Roadshow in Houston, there are forty thousand people attending his “church” every Sunday.

In spite of all that, we are the Church of Christ.  Despite all our faults, foibles, and fumbles, I’m convinced of that.

So how come we aren’t growing?  It’s not like we haven’t grown in the past or knew what works.  Even when we didn’t know what worked, the explosion of conversions in the latter decades of the twentieth century was impressive.  They came knocking even when we weren’t sure who was at the door.

So let me submit to you the reasons I think that we’ve hit a wall.  It’s really quite simple:  it’s because of patriarchs saying crazy stuff like this that pulls out the rug from us being evangelical:  https://orthodoxtimes.com/patriarch-of-alexandria-greek-greatness-will-never-be-eclipsed/

I guess Bartholomew doesn’t have the monopoly on slapping non-Greeks down.  Theodore of Alexandria has gone out of his way to give him a run for his money.

I don’t want to spend any more time on their idiocies, they’ll get their reward in due time.  I want to concentrate instead on how such unfortunate attitudes derail evangelism.  On just a human level alone, how will you or I be able to look at another Christian in the eye, one who is a decent human being, and answer them when they say “I guess I’m not good enough”.  Folks, I’ve been there.  It grieves me to think good and honest people really believe that we think that about them.

Not me, not ever again.  Not when Orthodox patriarchs pull stunts like this.

Just try to think for a moment how much this question must hurt a sincere inquirer who asks this.  One who knows that when he makes the switch, he risks possible estrangement from friends and family.  Especially when it comes from a person who tithes, who works in a soup kitchen, who prays incessantly or who has donated to the local denominational hospital?  Compare their ministry, what they do for Christ, and their love for Jesus, to ours.  We have food festivals.  That’s about it.

And that’s just on a personal level.  What about the nuts and bolts when it comes to the Faith?

We used to be able to tell Protestants that we didn’t have a Pope, that there was no supremacy, only primacy.  And that was why things moved at a glacial pace in our Church.  Because we weren’t the Orthodox Church, we were the Orthodox Churches.  And that despite the fact that we had no central, controlling authority (a la the Vatican) our faith was the same throughout the world.

As for our theology, it didn’t matter if a church was located was a tiny village in the Balkans or a Siberian settlement in Outer Mongolia.  From Africa to America, from Asia to Europe, the faith was the same.  And get this!  We allowed people to worship in their own language!  What differences existed in the rubrics were miniscule.  In fact, it had been this way for centuries.

If that’s not proof enough that Jesus is the Head of our Church, that the Holy Spirit is the divine Guide which ensures Orthodoxy, then nothing is.

But now, two of our most venerable patriarchs have thrown sand in the gears of what it means to be Orthodox.  As far as Bartholomew is concerned, his bigotry is now out in the open.  In one instance, he’s dusted off an anachronist canon and reinterpreted it to mean he’s pope of all the “barbarians”.  That’s merely exhibit A.  For exhibit B, he uses words that are racially supremacist when it comes to the Slavs (and yet he condemns “ethnophyletism” when it suits him).  And then there’s exhibit C, when he trampled all over normative ecclesiology and invaded another local Church’s territory.

What he’s done in the Ukraine is egregious on several different levels.  The best comparison is a violent home invasion.  First, he went into another man’s house.  Then he took over the house and kicked out the homeowner.  Then he had his way with the man’s wife and terrorized his children.  As a consolation, he told the man that he could come back every now and then to see his kids.  That in a nutshell, is what happened in the Ukraine.

As for the Patriarch of Alexandria, you can read his sordid understanding of history for yourself.  I imagine it’s going to inflame the real Africans and it’s only a matter of time before they’re going to be making a beeline for Moscow.  Why not?  They’re not stupid and they know a bigot when they see one.

There’s no recovery from this folks.  None.  At least for the foreseeable future, evangelism is dead in the water.   (Don’t even get me started on Ligonier!  That was the beginning of the end here in America.)

Now, I realize that what I’ve written is harsh.  I don’t like to be harsh.  Really.  (Ask Gail, she thinks I pull my punches way more often than I should.)  I really don’t want to be in the position of criticizing the bishops of two of our most ancient patriarchates in such a harsh fashion.  Capiche?  Really, I’d rather not have to.