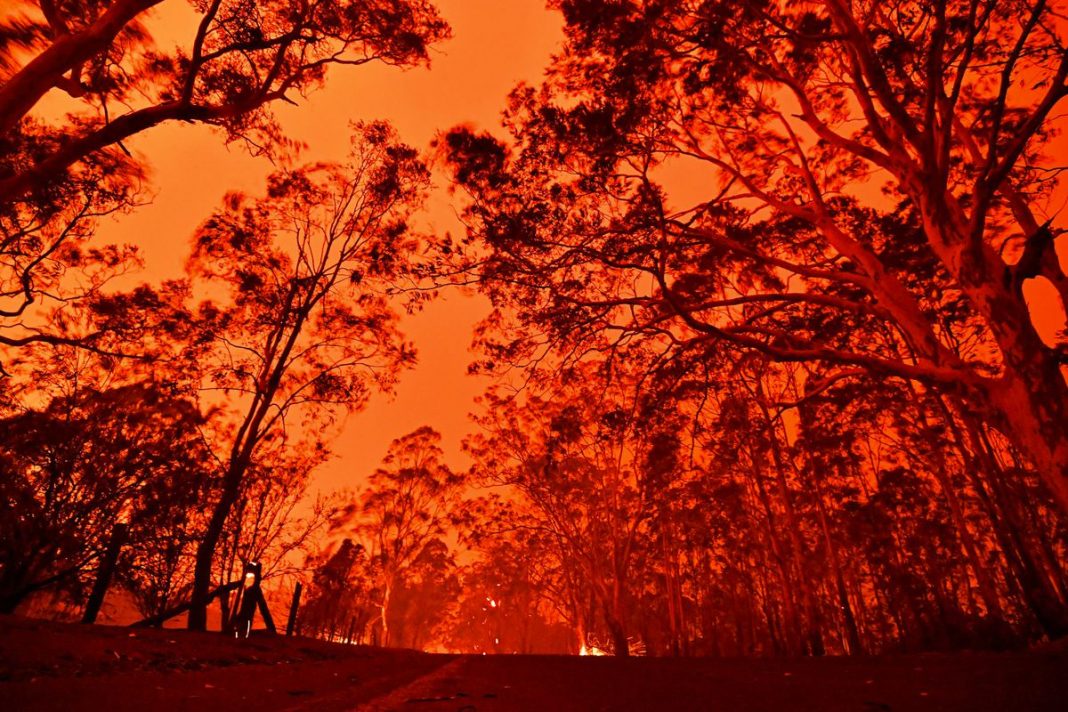 EDITOR’S NOTE (Nick Stamatakis):  I happen to be among the few in this audience who has studied very scientifically “climate change” as a young graduate student of Anthropology at Stony Brook. Then we had the chance to examine “ice cores” from the Arctic showing: a) That the Earth has sustained much warmer temperatures than what is proclaimed by some to be dangerous during the last 10,000 years and b) The temperature changes may be closely related to eruptions on the surface of the sun (solar flares), the most powerful source of energy in our planetary system. It was in the late 1980s when science was not influenced by politics and ideology. So, please, all those of you who are wearing priestly robes and have never taken a science class please do not insult our intelligence with your ignorance…

Climate Change Is No Catastrophe

No global problem has ever been more exaggerated than climate change. As it has gone from being an obscure scientific question to a theme in popular culture, we’ve lost all sense of perspective.

Here are the facts: in Europe, emissions in 2020 were 26% below 1990 levels. In the United States, emissions in 2020 were 22% below 2005 levels. Emissions are likely to start declining, too, in developing nations, including China and India, within the next decade. Most nations’ emissions will be bigger this year than last, due to post-Covid economic growth. But global emissions are still likely to peak within the next decade.

And the result will be a much smaller increase in global average temperatures than almost anyone predicted just five years ago. The best science now predicts that temperatures are likely to rise just 2.5-3°C above pre-industrial levels. It’s not ideal, but it’s a far cry from the hysterical and apocalyptic predictions of 6°C, made just a decade ago. A 3°C increase is hardly an existential threat to humanity.

Like what you’re reading? Get the free UnHerd daily email

Not that you’d know it, if you had half an eye on the headlines this summer. The floods, fires and heatwaves that plagued the world were, for many observers, proof that the impacts of climate change have already become catastrophic. In Europe, more than 150 people died in flooding. In the United States, wildfire season started earlier and lasted longer, razing hundreds of thousands of acres. Around the world, hundreds died from heatwaves.

But again, it’s worth reminding ourselves of the facts: there has been a 92% decline in the per decade death toll from natural disasters since its peak in the 1920s. In that decade, 5.4 million people died from natural disasters. In the 2010s, just 0.4 million did. Globally, the five-year period ending in 2020 had the fewest natural disaster deaths of any five-year period since 1900. And this decline occurred during a period when the global population nearly quadrupled — and temperatures rose more than 1°C degree centigrade above pre-industrial levels.

But then, 1°C is not that much. What determines whether people die in heat waves is not whether temperatures rose to 110°F — or even 115°F— instead of 109°F. It is whether or not they have air conditioning. Heat-related deaths have halved in the US since 1960 — even as the population expanded and heat waves grew in frequency, intensity, and length — because more and more people did.

Though climate alarmists steadfastly ignore it, our capacity to adapt is extraordinary. We are very good at protecting people from natural disasters — and getting better. To take just one example, France in 2006 had 4,000 fewer deaths from a heat wave than anticipated thanks to improved health care, an early-warning system and greater public consciousness in response to a deadly heat wave three years earlier. Even poor, climate-vulnerable nations like Bangladesh saw deaths from natural disasters decline massively thanks to low-cost weather surveillance and warning systems and storm shelters.

And today, our capability for modifying environments is far greater than ever before. Dutch experts today are already working with the government of Bangladesh to prepare for rising sea levels. The Netherlands, of course, became a wealthy nation despite one-third of its landmass being below sea level — sometimes by a full seven meters — as a result of the gradual sinking of its landscapes.

Global sea levels rose a mere 0.19 metres between 1901 and 2010. But the IPCC estimates sea levels will rise as much as 0.66 meters by 2100 in its medium scenario, and by 0.83 meters in its high-end scenario. Still, even if these predictions prove to be significant underestimates, the slow pace of sea level rise will likely allow societies ample time for adaptation.

Where the secondary effects of climate change do cause catastrophe, it’s often due to failures on the part of authorities. The extent of the devastation wrought by wildfires on the West Coast of America was, for instance, preventable. California has mismanaged its forests for decades — including by diverting money that the state’s electric utilities could and should have spent on clearing dead wood.

Given how good we are at mitigating the effects of natural disasters, it’s ironic that so many climate alarmists focus on them. It’s perhaps because the world’s most visually dramatic, fascinating events — fires, floods, storms — make their cause stick in the minds of voters. If it were acknowledged that heat deaths were due to lack of air conditioning and forest fires were due to the buildup of wood fuel after decades of fire suppression, alarmist journalists, scientists and activists would be deprived of the “news hooks” they need to scare people, raise money and advocate climate policies.

And not all climate alarmists are altruists. Elites have used the cause to justify efforts to control food and energy policies for more than three decades. Climate alarmists have successfully redirected funding from the World Bank and similar institutions away from economic development and toward charitable endeavours — which don’t power growth.

Is this the end of the world?

This is part of a common pattern: the people who claim to be most alarmed about climate change are the ones blocking its only viable solutions, natural gas and nuclear. This year’s increase in coal production is a case in point. China has been widely criticised for waiving environmental and safety regulations on its mining recently, in a mad rush to meet winter heating demands. But less attention has been paid to the fact that the increased demand is mostly due to climate activists’ efforts to prevent oil and gas development in Europe and the United States. Lack of natural gas is what led directly to China having to reopen coal mines — and to Europe, North America, and the rest of Asia having to burn more coal. Had climate activists not fought fracking in America and expanded oil and gas drilling in Europe, then we would not be experiencing its worst energy crisis in 50 years.

Meanwhile, the organisations claiming that climate change dooms poor Africans to war, drought and poverty — including the WWF, the World Economic Forum and the United Nations — are the ones seeking to deny poor Africans life-changing natural gas plants, hydro-electric dams, and funding for fertiliser, roads and tractors. It goes without saying that all those organisations are dominated by rich, white Westerners.

The truth is that prosperity and environmental progress go hand in hand. Reductions in carbon emissions came from fracking and off-shore natural gas drilling; both lowered electricity prices, too. Technological innovation like this lowers energy prices, which reduces natural resource use, moving humans from wood to coal to natural gas to uranium. So it’s better to see growth — such a bogeyman to Team Green — as a solution, rather than a problem.

Instead of putting the brakes on, we should be facilitating more innovation, prosperity and wealth. For instance, the melodramatic UN’s own Food and Agriculture Organisation (FAO) concludes, as do all reputable analysts, that future food production, especially in poor African nations, will depend more on access to technology, irrigation and infrastructure than on climate change — these are the things that made all the difference, last century, in today’s rich nations. Humans today produce enough food for ten billion people, a 25% surplus. And even the FAO suggests that we’ll produce even more, under a wide range of climate change scenarios.

Indeed, the best available economic modelling finds that, by 2100, the global economy will be three to six times larger than it is today, and that the costs of adapting to a high (4°C) temperature rise would reduce gross domestic product by just 4.5%. Why kill ourselves trying to eliminate a problem that just isn’t that severe?

Eco-fascism is our future

Consider the other threats humankind has recently been forced to cope with. In July 2019, NASA announced it had been caught by surprise when a “city-killer” asteroid passed by — just one-fifth of the distance between Earth and the Moon. In December 2019, a volcano unexpectedly erupted in New Zealand, killing 21 people. And in 2020 and 2021, four million people died from coronavirus.

While nations take reasonable actions to detect and avoid asteroids, super-volcanoes, and deadly flus, they generally don’t take radical actions — for the simple reason that doing so would make societies poorer and less capable of confronting all major challenges. Richer nations are more resilient, which is part of the reason why disasters have declined. When a hurricane hits Florida, it might kill no one, but when that same storm hits Haiti, thousands can die instantly through drowning — and thousands more subsequently, in disease epidemics like cholera. The difference is that Florida can afford to prepare properly, and Haiti can’t.

The richer the world gets, the better it will cope, then. But the climate alarmists have taken against economic growth. According to their holy scripture, the industrial revolution, powered by fossil fuels, was our fall — and the consequence is, according to the United Nations, “extinction.” The only alternative is puritan: don’t eat meat and don’t fly. There are even indulgences, for the wealthy who feel guilty, in the form of carbon offsets sold through the airlines.

This is the heart of the matter: climate alarmism is powerful because it has emerged as the alternative religion for supposedly secular people, providing many of the same psychological benefits as traditional faith. It offers a purpose — to save the world from climate change — and a story that casts the alarmists as heroes. And it provides a way for them to find meaning in their lives — while retaining the illusion that they are people of science and reason, not superstition and fantasy.

Naturally, as a religion, climate change has a fraudulent aspect. Some offsets pay rich landowners not to cut down trees they could not profitably cut down anyway. Exposed, the climate religion seeks to censor. The American government’s Forest Service has repeatedly silenced one of California’s most published and respected scientists, Malcolm North, who stressed to me and other reporters that the cause of high-intensity forest fires is not climate change, but rather wood fuel. The Center for American Progress, which raises tens of millions from natural gas, renewable energy, and financial interests, has been pressuring Facebook to censor critics of renewable energy.

It’s working: few people have a realistic understanding of climate change. Few consider whether, at its current rates, it might be less dangerous than efforts to mitigate it.