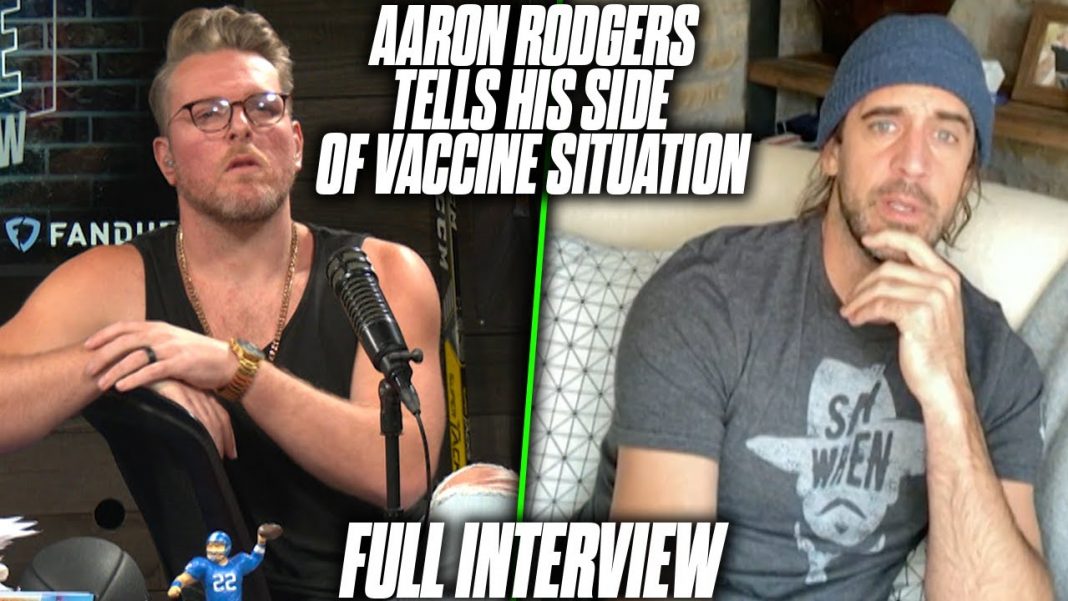 You don’t have to like Aaron Rodgers to pump your fist when he drops COVID truth bombs on a hit sports talk show.

The Green Bay Packers quarterback, who is currently under fire from the COVID scolds for being “secretly” unvaccinated and contracting the virus, joined “The Pat McAfee Show” to discuss his situation. And let’s just say he didn’t hold back. Here are the top nine most based things Rodgers said.

The idea that “unvaccinated people are the most dangerous people in society,” is the media’s “propaganda narrative,” Rodgers said.

“That is what the media has been trying to do, they’re trying to shame and out and cancel all of us non-vaccinated people, call us selfish,” he continued. “I mean that’s the propaganda line too now: You’re selfish for making a decision that’s in the best interest of your body.”

2. Personal Health Should Be Private

“Personal health decisions, in my opinion, should be private,” Rodgers said after going after the media for “taking shots” at him. “And they should haven’t to be … over-scrutinized by, you know, people who are only pushing their own propaganda.”

The media went berserk this week after the quarterback tested positive, writing long screeds and ranting on air about how Rodgers had “lied” about his vaccination status back in August by saying he had been “immunized.”

“For the media out there taking shots at me, you don’t know my story. Now you do. So quit lying about me,” Rodgers said.

3. ‘Pandemic of the Unvaccinated’ Is a Lie

Rodgers took a straight shot at President Joe Biden and all who carry water for his narrative by obliterating the talking point that COVID-19 is now a “pandemic of the unvaccinated,” something the federal government continues to double down on with its sweeping vaccine mandate.

There’s a lot we still don’t know about the shot, he continued, saying that it’s “wrong and reckless” to market it as a cure-all.

4. The Left Politicized the Vaxx

“The problem with this is it is so political, and health shouldn’t be political,” Rodgers warned.

“We all should have been a little hesitant. When Trump in 2020 was championing these vaccines that were coming so quick, what did the left say? … Don’t trust the vaccine. Don’t get the vaccine,” he continued. “What happened? Biden wins and everything flips. Shouldn’t that give you a little bit of pause? … Isn’t this about health, not politics?”

If this is really about health instead of politics, Rodgers probed, why haven’t any of the health experts been talking about diet, exercise, or vitamins?

5. The Vaxxed Are Still Infectious

Rodgers said that because he is unvaccinated, he is required to undergo COVID testing every day, while all the vaccinated players do not have to, despite their ability still to contract and transmit the virus.

“I tested over 300 times before finally testing positive. Like I said, it was probably from a vaccinated individual,” Rodgers said. “I don’t think that many of the policies are rooted in the science.”

“The only time I haven’t worn my mask is when I’m around all vaccinated people,” he added.

“Health is not a one-size-fits-all for everybody,” Rodgers announced, adding that he was allergic to an ingredient in the mRNA vaccines. Enough said.

“I’m going to have the best immunity possible now,” Rodgers said, citing the study from Israel on the robust immunity acquired from COVID infection and recovery.

The facts support this. Epidemiologist and biostatistician Martin Kulldorff, who was a professor at Harvard Medical School for a decade, recently published an analysis breaking down the methodology of different studies on natural immunity. He demonstrated how the Israeli study, the one Rodgers cited, is superior in its methodology and precision of its findings than the prevailing study from the Centers for Disease Control and Prevention.

8. Science Is Better Than Shaming

“Some of the rules to me are not based in science at all,” Rodgers said of the many rules he had already illustrated that were not based in science. “They’re based purely in trying to out and shame people, like needing to wear a mask at a podium when every person in the room is vaccinated and wearing a mask makes no sense to me.”

“Bodily autonomy is a right, and the shaming and the outing that, you know, people seem to get off on so much of finding these people who, you know, ‘Oh my God, can you believe these crackpots who are not vaccinated?’ Everybody has their own story … and their own reasons for doing things. But this shaming cancel society is wrong.”

9. Overall Health Is Important Too

“It’s a virus of health, and the most important thing would be educating people on how to live a healthier life,” Rodgers said regarding the pandemic that was exacerbated mightily by comorbidities and especially obesity.

Early data showed that obesity tripled a person’s risk of hospitalization, and 78 percent of those hospitalized with the Wuhan virus were overweight or obese.