EDITOR’S NOTE (Nick Stamatakis):  Well, well, well…  Just a few weeks after the “foul-mouthed” Victoria Nuland visited Putin in person (and we all know that Ukraine was the main item on the menu…) last week CIA chief William Burns visits Moscow and this time we are certain that something serious is going on… No, I don’t believe the official US announcement that an effort was made to avert “Russian aggressiveness” at the Ukraine border… At this moment Putin can be as aggressive as he needs to… Who is going to stop him?  Biden? He gave him a huge financial boost by approving Nordstream-2…  Putin will get what he wants in Ukraine – do not doubt me on this.  All the cards are in his hands – including the Hunter Biden corruption there…

But I know someone who is going to lose no matter what.  Can you guess? Yes, he is Bartholomew “the great pretender” of Constantinople…  Who was blackmailed to play geopolitical games where he should not...

Burns’ visit to Moscow was not previously announced and the Security Council released no further details. 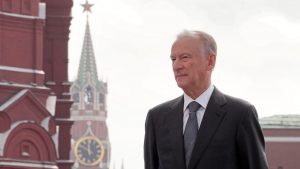 A U.S. Embassy spokesperson told AFP that Burns’ visit came at the request of President Joe Biden and that the director was leading a delegation of senior officials for meetings over two days.

“They are meeting with members of the Russian government to discuss a range of issues in the bilateral relationship,” the spokesperson said.

The meeting comes as Russia’s ties with the West are at their lowest levels in years, strained by a wide range of disagreements.

Western nations have imposed a series of sanctions on Russia over its 2014 annexation of Crimea, alleged election interference, cyberattacks and the poisoning of Kremlin critic Alexei Navalny.

But U.S. officials have said they are looking for cooperation with Moscow on specific issues, including strategic arms reductions, the Iran nuclear talks and cracking down on ransomware and other cyberattacks.

Russia’s Ambassador to the United States Anatoly Antonov in an address Tuesday described that summit as “fruitful.”

“Over the past year, there have been some small, but still positive developments in bilateral relations,” Antonov said, citing climate and arms control.

Russian and U.S. diplomats have since that meeting held closed-door talks in Geneva on arms control and the State Department’s Under Secretary for Political Affairs Victoria Nuland was in Moscow for talks last month.

Burns, a veteran diplomat who was the U.S. ambassador to Russia in 2005-2008, became CIA director in March.