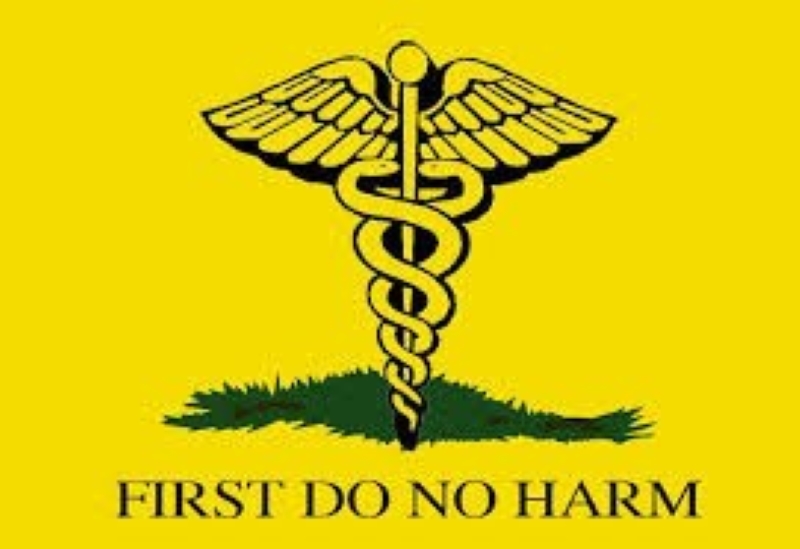 The Hippocratic Oath And Medical Ethics Versus COVID Mandates

I am not a medical professional and am wholly unqualified to give medical advice. I can, nonetheless, reason and observe. It is my belief that people of good will, interacting with one another in good faith, will not be prone to cause one another harm.

Sadly, our elected government, with its appointed institutions and agencies cannot be deemed to be acting in either good will or good faith with We the People. Instead, we are witnessing only their desire to “mandate” what our behavior and our care should be in the battle to manage an endemic SARS-CoV-2 virus and its inevitable mutations.

These people who deign to be our rulers and betters have lost their way. They have completely decoupled themselves from constitutional government and the sound medical ethic to “do no harm.”

Given that a pandemic has been raging across the globe these issues surrounding “good” medicine and governance are obviously a concern. Also given the morass of government agencies that have not guided us in an effective response, there are instead greater levels of fear, distrust, and frustration among our fellow citizens.

I have been reflecting lately on the precepts, medical ethics, and admonitions in the Hippocratic Oath. Consider the original Greek version (translated to English, of course):

I will apply dietetic measures for the benefit of the sick according to my ability and judgement; I will keep them from harm and injustice

The modern version states this portion a bit differently:

I will follow that method of treatment which according to my ability and judgment, I consider for the benefit of my patient and abstain from whatever is harmful or mischievous.

(Emphasis added on both versions.)

According to the Harvard Health Blog of the Harvard Medical School, the phrase “Do no harm,” is attributed to Hippocrates in “Of the Epidemics,” as follows:

The physician must… (snip) have two special objects in view with regard to disease, namely, to do good or to do no harm. (Emphasis added.)

The admonition “do no harm” neither explicitly nor implicitly compels a priority, which is commonly heard as “First, do no harm.” It would seem intuitive, however, that the doctor treating the patient would not want the medicine, or cure, to do greater harm than the injury or illness. When attempting to correct a problem, “First, do no harm” should be inherently obvious, whether one is an auto mechanic, aircraft technician, plumber, carpenter, highly skilled and specialized surgeon, or medical doctor.

“Customer Satisfaction” and “Personalized Service” are typically how business owners view the same principle because that is how we stay in business and feed, clothe, shelter, educate, and otherwise provide for our families.

Sadly, those elected to the government who are entrusted to appoint individuals to positions in their alphabet soup of departments and agencies, who then learn their own language of catchphrases, talking points, agency acronyms, and regulations, know only one way to do things: their way, at their pace.

I will assert that the COVID vaccine mandate is not good medicine. Dr. Robert Malone has been credited with inventing the mRNA “vaccine.” He has been quoted in radio, television, and print media (too widely to list here) saying that a drive to vaccinate the general population is the wrong approach.

Well, that is curious, isn’t it? One would think the inventor of the “vaccine” would advocate for its widest possible distribution and use, just as the government is doing. However, Dr. Malone has said repeatedly that widely “vaccinating” the general public will provide an infectious virus, living in many millions of “vaccinated” hosts, more opportunity to mutate and develop into a “vaccine” resistant strain.

This concept is already common knowledge because the flu shot is perennially prescribed for those at the highest risk of a life-threatening illness from the latest strain of the influenza virus. That’s right—each year the flu shot is developed months in advance to be most effective against what the medical establishment expects to be the active strain come flu season. Viruses mutate. It’s a well-known fact. Therefore, in the middle of an outbreak of the latest strain of the SARS-CoV-2 virus, widespread use of a vaccine developed for the previous strain will enable the current strain of the virus to further adapt and mutate to avoid the “vaccine” in the future.

Therefore, the vaccine mandates are not good medicine, and violate the “for the benefit of the patient and abstain from whatever is harmful or mischievous” admonitions in the Hippocratic Oath. Those at the highest risk of death from COVID should be vaccinated but not those demonstrated to be in the low-risk groups because, if one is healthy and under 60 years old, the risk of death from an infection is less than about one-half of one percent. Those at the lowest risk should be prescribed alternatives such as preventative medicines or a regimen of dietary supplements that fortify and enhance the body’s natural immune response.

The “First do no harm” ethic has hardly been part of the government’s calculus in response to the disease. Instead, at every turn, the situation is exploited for political benefit. Pre-vaccine, the leviathan that is the American medical establishment restricted the availability and use of effective anti-viral medicines, resulting in needless death. Now, they restrict the supply, prescription, and use of these same inexpensive, safe, and effective medicines that prevent and treat COVID and its current and future variants. Instead, we are mandated only one option—their uncompromising and unshakeable reliance upon the vaccines.

Most recently, there is overwhelming evidence the “vaccine” mandates are now and will continue to hamper the economic recovery by driving down labor force participation. The September 2021 U.S. Department of Labor Blog reported, “The labor force participation rate is also hovering stubbornly at a basically steady 61.6%. To truly capture our full economic potential, that number needs to rise.” By mandating vaccines in the nation’s labor force for those who are below 60 and therefore low risk, there will be a backlash as many will reject getting the vaccine. If these are among those who have not been able to return or have voluntarily abstained from returning to work, how is America to “capture our full economic potential?”

Put in the context of the Oath, “according to (the) ability and judgment” of any reasonable person, how exactly are the vaccine mandates “for the benefit of (the) patient?” They are not—they neither “keep them from harm” nor “abstain from what is harmful.”

The Oath is nearly universally applicable to every single issue we face. Solve the problem! Don’t make it worse!

In their reliance upon what is theoretical, rather than the realities and empirically verifiable truths of history, all that these government eggheads know how to do, and what they think will work but rarely does, is to mandate—something, anything—and their job is done.

Their mandates are garbage and are hurting America. The world is not safer if America is diminished. Americans cannot prosper if America’s “full economic potential” is left unrealized. The most maddening part is, on every front and on every issue, these are self-inflicted wounds. America is being “suicided” by those we have elected.

Do not comply, resist in every manner possible. Our resistance will force our political opposition to further reveal their hateful, and America-hating policies. That might be what it takes to make more of our fellow citizens wake up (!) and convince them of the actual destruction being wrought upon all of us.

Jeff M. Lewis is a Christian, a husband and father, a Veteran, and a small business owner who resides with his family in South Texas.