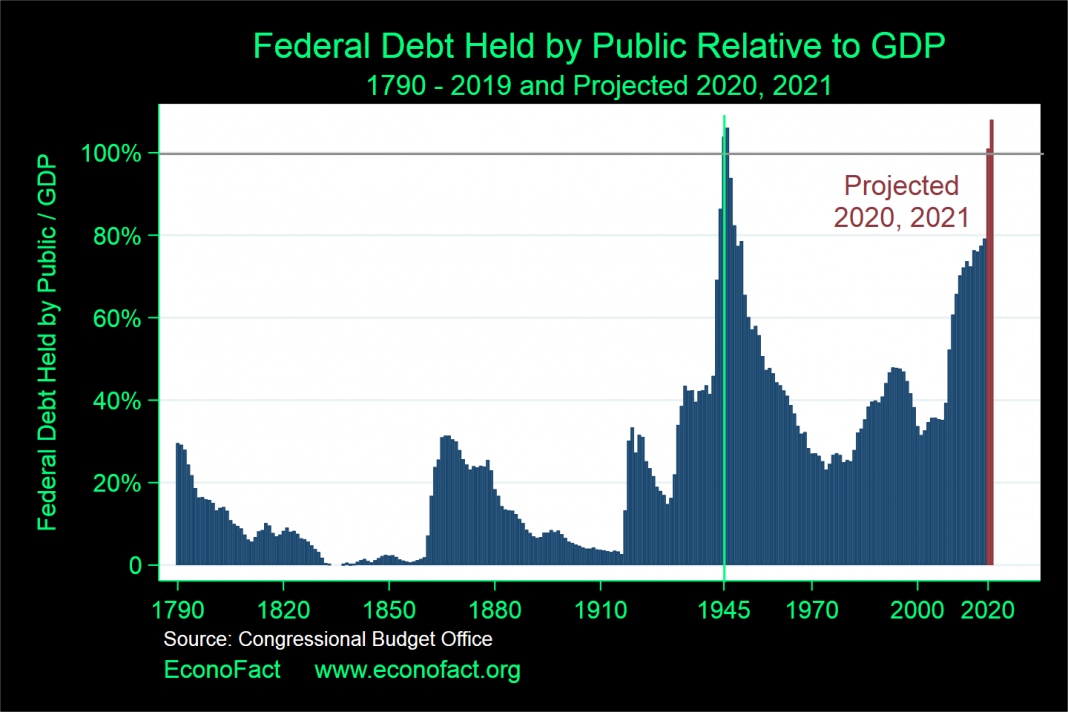 EDITOR’S NOTE: (Nick Stamatakis): Worries about inflation are currently dominating the news – rightly so. We keep forgetting that “the powers that be” do not really care if inflation impoverishes the middle and lower classes.  They are well-cushioned in their hi-end “lifestyles”… But there may be another role for the Federal Reserve and the US Government – to use high inflation as a tool for the reduction of Government Debt, currently at 100% GDP – or about $28 trillion…  (Of this amount over $6 trillion is held by foreign countries – Japan and China together are holding about $2.5 Trillion…) This older article below explains in simple – but not simplistic – terms this very interesting topic...

This is also a warning to all of you who have a great part of your life savings in cash, a warning to start investing it in inflation-resistant assets (like dividend stocks, real estate, businesses, and inventory).  If you do, without realizing it, you will help grow the American economy and thus eliminate even more debt…

I will close with a story relayed to me in the mid-1980s by a good friend, Bill Barr, God bless his memory, who was then a retired banker, a VP of Manufacturers Hanover (now Chase) in charge of all the computer operations of the Bank – in fact, he was the guy who started the whole computer system used by the Bank and is now used by Chase (this system is the best in the business)… Bill, a WW II Veteran, a USAF pilot, and a distinct member of the “Greatest Generation”, was answering those who were worried about the Japanese investments in America (at the time many were frightened that “the Japs” had bought even the Rockefeller Center in NYC!!): “Nick, those guys do not know anything about how the system works” he was telling me… “Mark my words, in a short while the Japs, will be losing their pants…”  Sure enough, just a few years later, in the big commercial real estate crash of 1990-92, the Japanese sold for pennies on the dollar their “investments” in the American real estate market – including the Rockefeller Center…  Without realizing it, the Japs dropped so much money in American commercial real estate that they over-inflated it (our “smart-asses” of course obliged by helping along until the inevitable momentous “crash”…)  The Japs lost so much money, the Japanese economy never truly recovered since then… My friend Bill, would repeat the story every time he would invite us, all graduate students from Stony Brook, to his beautiful house in Oak Beach, overlooking the Atlantic Ocean…

The teachable moment of the story: There are always unseen effects behind the economic news we are fed with on TV and the Internet… Do not focus on the “Rockefeller Center” of our days because the real story will be learned 5-10 years later…

The Federal Reserve is back in the inflation business. The Fed, with the blessing of the U.S. Treasury and the Obama administration, recently announced they will again start inflating the money supply in hopes of staving off a sustained deflation. Why are they so fearful of deflation?

Put simply, most government officials know how to deal with inflation. Actually, inflation is the political savior of an overspending country that finds itself deep in debt, as the U.S. is today. A country has four tools to retire its debt: raise taxes, cut spending, declare bankruptcy, or debase the currency through inflation (learn more here).

Of these options, bankruptcy is the most unpalatable. It would most likely mean the country goes through a gut-wrenching depression and is unable to borrow for the foreseeable future.

Almost as unpalatable to politicians are spending cuts of any kind. Taking away something the electorate views as a “right” or an “entitlement” is akin to ending your political career.

Raising taxes is somewhat more appealing, especially in countries where the majority of the voters don’t pay taxes or the increases apply primarily to those the electorate perceives as “the rich.” The risk here is that if taxes increase too much it reduces the incentive to work and the whole economy

crashes. This means gross tax revenues fall, which in the end actually increases the country’s debt problem as the government must increase borrowing to keep from making any spending cuts.

That leaves inflation. A slow, chronic inflation is the most politically palatable way of reducing the debt in a manner that is somewhat unnoticeable to the electorate.

How Does Inflation Reduce Debt?

With inflation, the losers are the people and institutions that own the debt, because the currency shrinks in value. For example, say you loan the government money by buying a $1000 U.S. government bond that matures in ten years. At the time you buy it, you could buy a fully loaded laptop or a round trip ticket to London for $1000.

Now, let’s say the U.S. inflates its currency at a 7% rate for the next ten years, which would be about twice the “normal” inflation rate of 3.3% for the past 80 years. At the end of that time the bond matures and you get your $1000 back. You go to buy a laptop; they now sell for $2000. That trip to London costs $2000, too. Many people in this situation will think that the prices of laptops and airline tickets have gone up.

Actually, in real dollars (which are dollars adjusted for inflation), the cost of these items hasn’t gone up a dime. It’s the value of the dollar that’s gone down, in this case, by 50% over ten years. The big winner here is the U.S. government, because its multi trillion-dollar debt has been chopped in half (again in real dollar terms) in ten short years. They accomplished this without raising taxes or cutting spending, which is intoxicatingly appealing to politicians.

If the country slides into chronic deflation, similar to Japan which has seen consumer prices fall up to 2% a year for 15 years, government revenues will fall while the real value of its massive debt will grow, further stagnating future growth. It becomes a vicious cycle which politicians have few, if any tools, to combat.

That is why gradual inflation is the preferred medicine. When it’s done well, citizens become like the proverbial frog that is cooked slowly in a pan of water where the temperature is gradually increased, rather than being frozen to death by deflation. In the end, of course, neither outcome is good for the frog.